Friday’s ad is for “Hamm’s,” from the 1950s. This ad was made for Hamm’s Brewing, which was founded in 1865 by Theodore Hamm in St. Paul, Minnesota. At its peak, it was the 5th largest brewery in America, and operated facilities in five cities, including San Francisco, L.A., Baltimore and Houston, in addition to the original brewery in Minnesota. This one features a glass of beer and a can both melting in a large pile of snow, with a lake scene for a background, with the tagline: “Cool Idea … from the land of sky blue waters!”

I could only find this smaller image that wasn’t a reproduction sign:

Today is the birthday of Jackson Koehler (October 8, 1850-December 22, 1903). The Eagle Brewery, in Erie, Pennsylvania, was built in 1855, but in 1883 it was purchased by Jackson Koehler, who renamed it the Jackson Koehler Eagle Brewery. In 1899, it became a branch of The Erie Brewing Company, which weathered Prohibition, reopening in 1933 and remaining in business until finally closing in 1978. 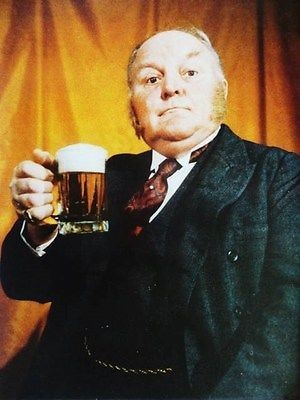 This is not a picture of Jackson Koehler, I could not find one of him. This is local actor Gordon Crandall, who the brewery hired to play “Uncle Jackson” in the 1960s.

This biography is from “Nelson’s Biographical Dictionary and Historical Reference Book of Erie.” In this account, they give his birth year as 1851, but his headstone clearly lists 1850, so I think that’s the one to go with. 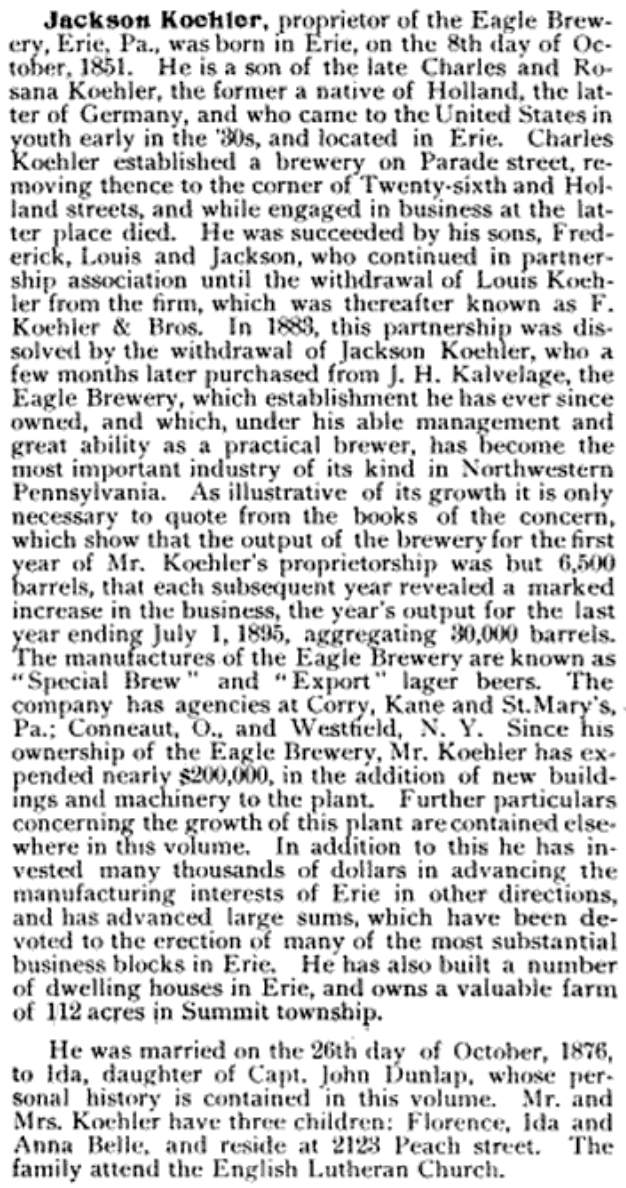 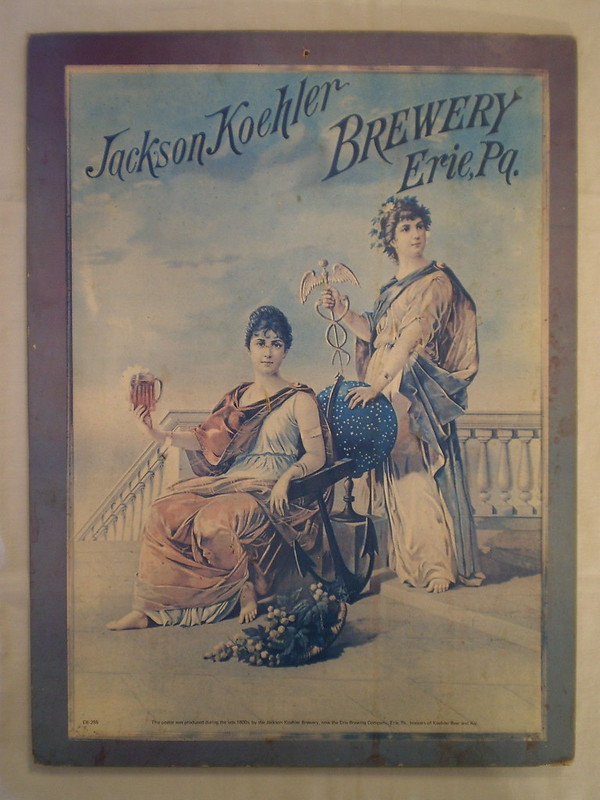 The site of the Jackson Koehler Eagle Brewery is on the U.S. National Register of Historic Places. Here’s the Wikipedia entry:

Jackson Koehler Eagle Brewery was a historic brewery complex located at Erie, Erie County, Pennsylvania. The original section constructed in 1891 consisted of the brewhouse with grain tower, racking room, filter room, and keg wash room. Later additions include the storage cellar, keg receiving and storage rooms (1933, later demolished), and rathskeller (1936). The complex was constructed of brick, with Germanesque-Teutonic-style influences. A brewery was sited here as early as 1855. The Eagle Brewery merged into the Erie Brewing Company in 1899. The Erie Brewing Company closed in 1978. It was demolished in 2006.

It was added to the National Register of Historic Places in 1982. 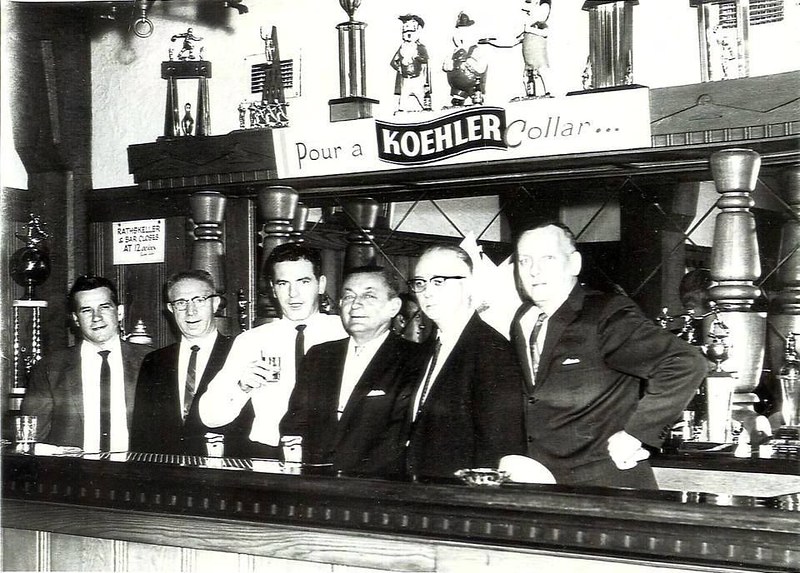 Inside the Rathskeller, built in 1936. 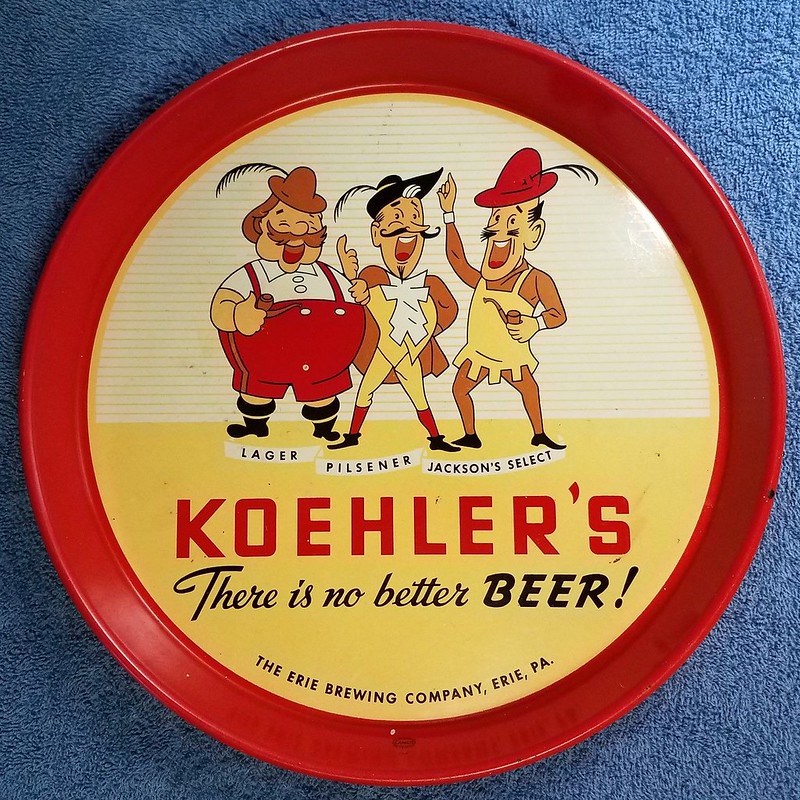 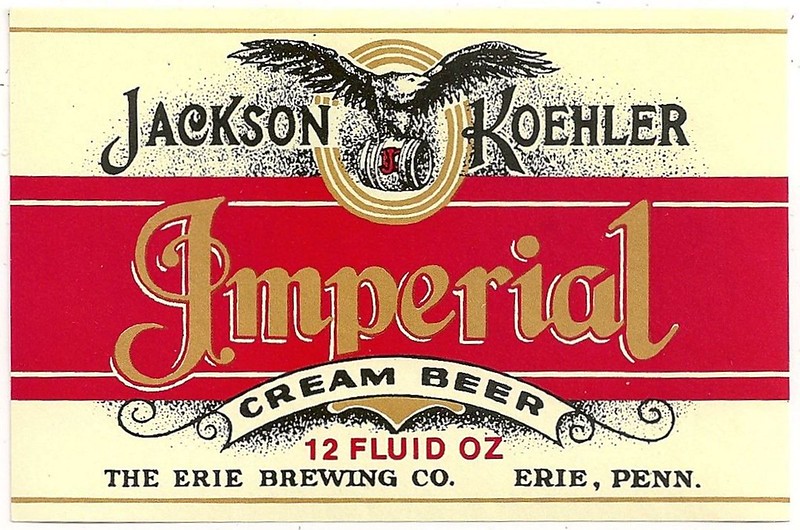 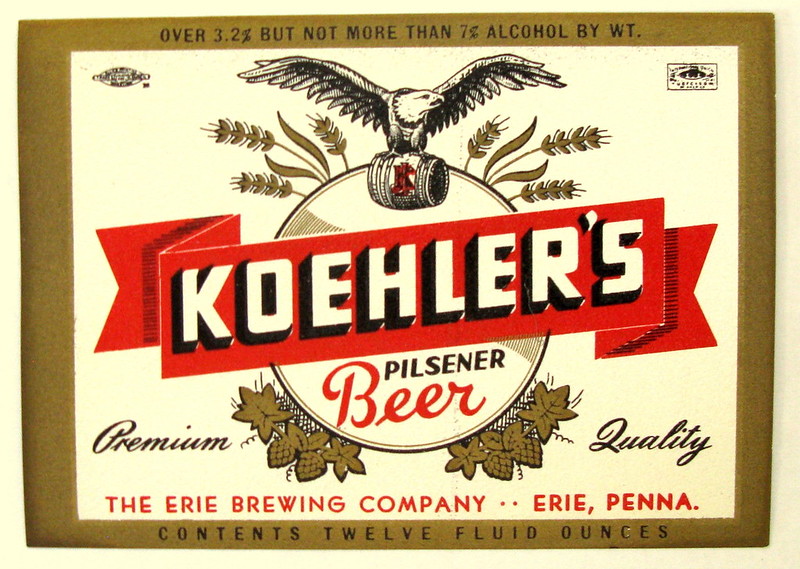 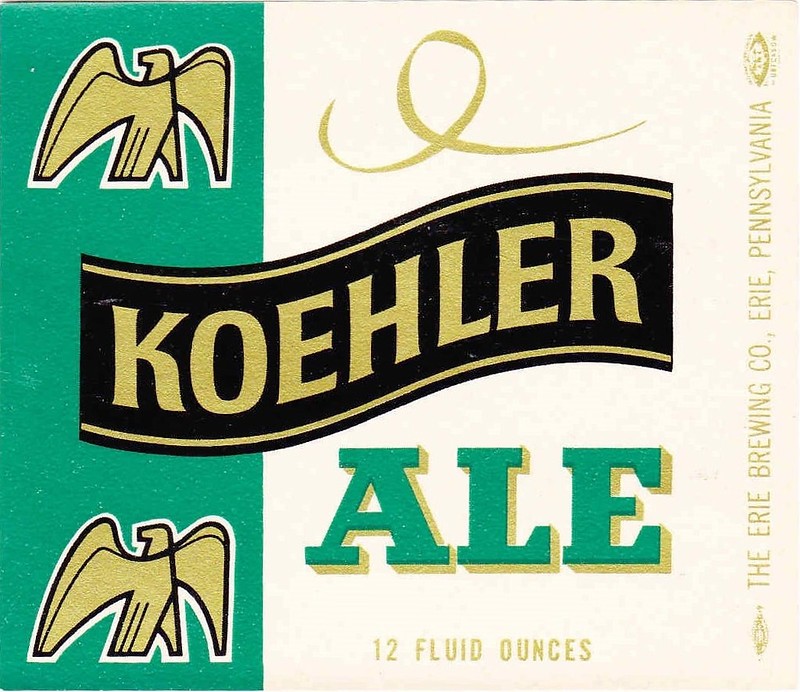 Today is the birthday of Cornelius Antonius Van Ginderachter (October 8, 1859-January 9, 1905). He was born in Merchtem, Belgium, which is a municipality located in the Belgian province of Flemish Brabant. In 1888, he acquired the Brouwerij Martinas, which had been founded in 1871 by Florentinus De Boeck. After his death, his son Corneel van Ginderachter took over the brewery, and in 1928, Cornelius’ grandson Joseph created their most well-known beer, Ginder-Ale, and the business became known as Brouwerij Ginder-Ale.

Here’s a short history of the brewery translated from the Belgian website Residentie Martinas.

The brewery was founded in 1871 by Florentius De Boeck (1826-1892) – the father of composer August De Boeck – and was taken over in 1888 by Corneel van Ginderachter. After Corneel’s death, the company was managed by his wife Hendrika van Nuffel, who had to hand over her copper boilers to the Germans during the First World War. In 1928, son Joseph launched the high fermentation beer Ginder Ale, a beer of the Spéciale belge type that, according to experts, was closely related to the taste of Antwerp’s De Koninck or Palm from Steenhuffel. The company enjoyed its greatest success in the 1950s, employing 180 people at its peak. In 1973 it was taken over by the Artois Brewery – from 1988 Interbrew – and it continued to brew there until 1991. From then on, production was transferred to Leuven and to date 3,000 hectoliters are produced annually. This beer is usually distributed in the vicinity of Merchtem, so that one can literally speak of a regional beer. Due to the successive mergers, Brouwerij Ginder-Ale is part of Anheuser-Busch InBev.

Today is the 42nd birthday of Garrett Marrero, co-founder and brewmaster of Maui Brewing. His brewery started as a brewpub on the island in 2005, and quickly expanded to include a small production brewery, but more recently Maui built a much, much bigger brewery in Kihei, which is centrally located, and not too far from the airport. I’ve known Garrett for a number of years, but finally had the chance to visit his breweries on Maui during a family vacation there during Thanksgiving week a couple of years ago. Garrett’s a great person and terrific brewer, giving you more than enough reasons to visit him on the island of Maui. Join me in wishing Garrett a very happy birthday. 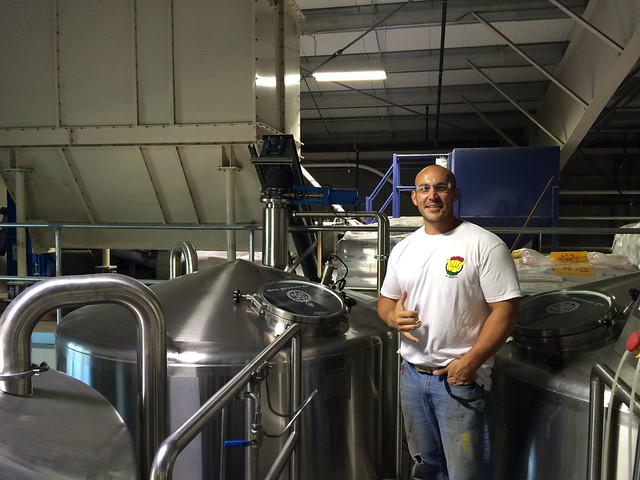 Garrett showing off his new brewhouse when I visited him two years ago during Thanksgiving week. 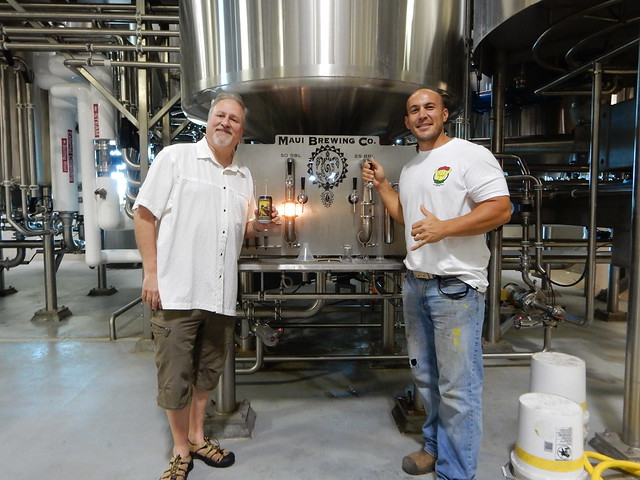 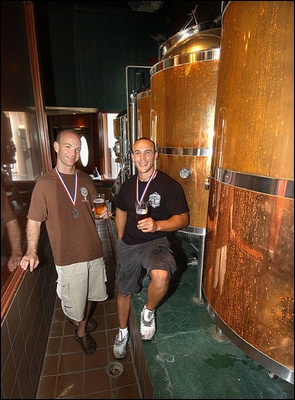 Today is the birthday of Nicholas Bastendorff (October 8, 1842-December 22, 1915). Bastendorff was born in Luxembourg, though it was considered part of Prussia then (today Germany), and may have been part of the area of Luxembourg partitioned to Prussia in 1815, and before they gained their independence in 1867. He came to Pennsylvania when he was 30, and settled in Lancaster. While I can’t find very much information about Bastendorff, he was apparently one of the early owners of the Lion Brewery, and later was involved in some fashion with the Rickers Brewery, although I can’t find anything out about that brewery, not even where it was located. 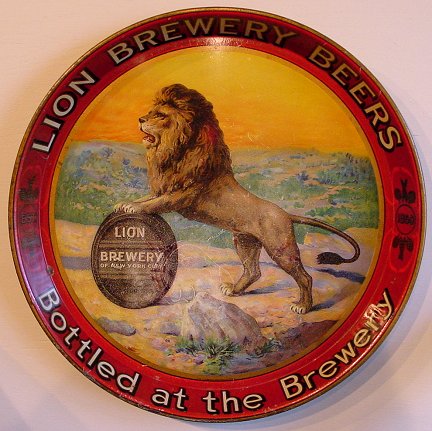 The only mention I found was his obituary in the American Brewers Review from 1915: 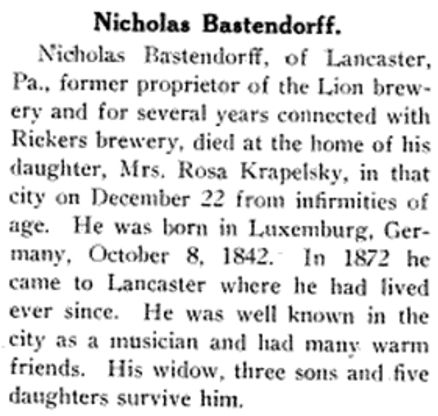 The brewery was also known for a time as the Lion-Gibbons brewery and they had a line of beers under the Gibbons name. 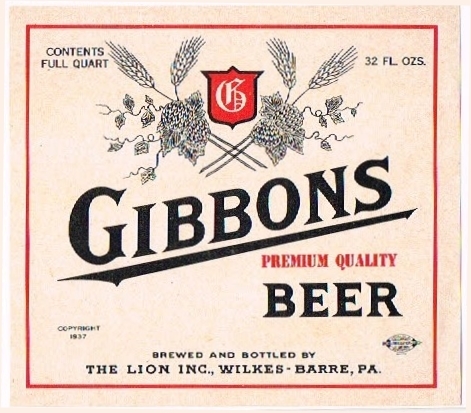 Though nowadays Lionshead Deluxe Pilsner Beer is their flagship beer. 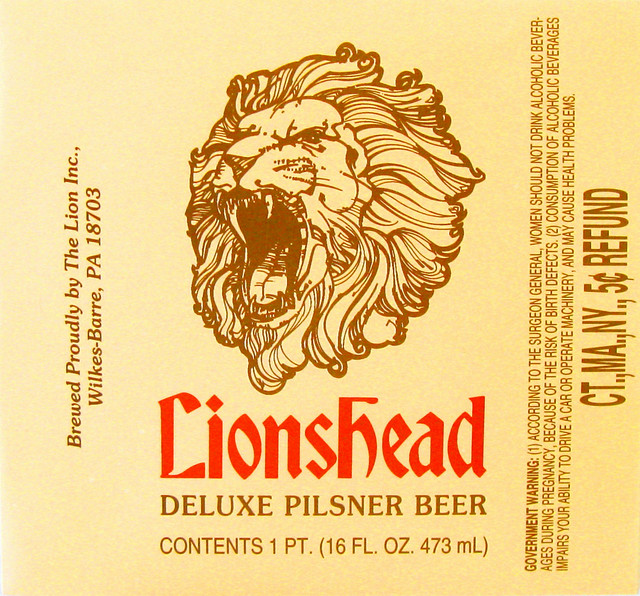 The Lion Brewery’s early history, from their Wikipedia page:

Lion Brewery, Inc. started as the Luzerne County Brewing Company with the acquisition of land from Delaware and Hudson Company in 1905. The land was purchased for one dollar on the terms that the company would build a brewery capable of producing 100,000 barrels per year in just the first year and sell each barrel for no less than a dollar a piece. If the terms were not met, the land would return to the Delaware and Hudson Company. The Luzerne County Brewery survived the terms of sale and was able to remain strong through the Prohibition years, 1920-1933, by brewing cereal beer. Cereal beer is more commonly known as “near-beer,” as it has an alcohol content of about 0.5%, which is about a tenth of most beers. Ted Smulowitz purchased the Luzerne County Brewery after Prohibition in 1933 and renamed it The Lion Brewing Company. 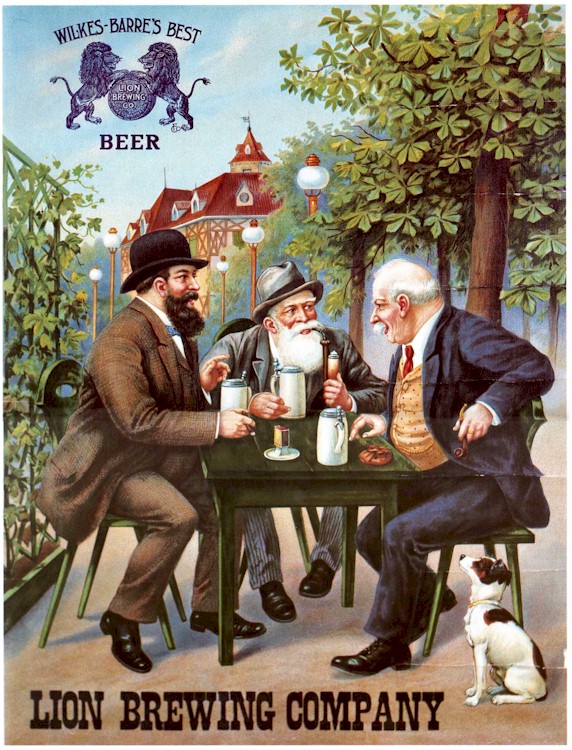