You are here: Home / News / 21st Amendment Preparing to Can Their Beer

Shaun O’Sullivan, the brewmaster at 21st Amendment brewpub in San Francisco, has been extolling the virtues of canned beer for many months now, maybe longer. He’s been researching the improved technology for a while now, convinced that craft beer in cans is the wave of the future. But all that planning is going to begin paying off any time now. Shaun and his business partner Nico Freccia invited me to join them at the Ball Plant in Fairfield, California to watch the first cans of 21st Amendment beer manufactured. I’ve seen literally hundreds and hundreds of bottling lines, glass plants and even watched hand blown glass being made in Jamestown, Virginia but I’ve never seen beer cans being made. So I jumped at the chance to visit a can factory.

Left: The first Krueger can as shown in The Brewer’s News. Right: A digital recreation of the same can.

You know what they say. “Everything old is new again.” Beer cans debuted in 1935 when a now obscure New Jersey brewery, Gottfried Krueger, introduced their Krueger Cream Ale in cans in Richmond, Virginia. The advantage in those days was to protect the beer from becoming lightstruck. According to the BCCA account, “[b]ut the beer can really made its debut some 14 months earlier — just before the repeal of Prohibition. American Can Company had engineered a workable beer can. All that was needed was a brewer willing to take the pioneering plunge.” It tested very well and the rest is, as they say, history. Cans were very popular from the beginning but still did not outsell bottles until around 1969. That trend reversed itself again sometime in the 1980s or early 1990s when bottles again were the most popular package. While canned beer has been stigmatized as inferior to glass, the technology to make the cans, by coating each can with a protective internal coating so that the beer never comes in contact with the metal, has removed the issues that led to the tinny, metallic flavor that often leached into canned beer.

And slowly but surely, craft breweries have started canning their beer. Ed McNally’s Big Rock Brewery of Canada was probably the first craft beer I can recall in cans and Portland Brewing canned their McTarnhan’s Ale for sale on airplanes almost a decade ago. But Oskar Blues of Lyons, Colorado, with the help of Marty Jones, my friend and colleague — he also writes for the Celebrator — was the real pioneer of good beer in cans with their Dale’s Pale Ale leading the way. Since then several other craft breweries have begun canning their beers. Now 21st Amendment’s name can be added to the list. They’re going to put two of their beers in cans, the Watermelon Wheat and their IPA. And I believe they may be the first craft brewery in the Bay Area to can their beer. Ukiah Brewing was first in California when they came out with their Ukiah Pilsner last January. Today I watched the Watermelon Wheat cans being run and had an extensive tour, which was great fun. 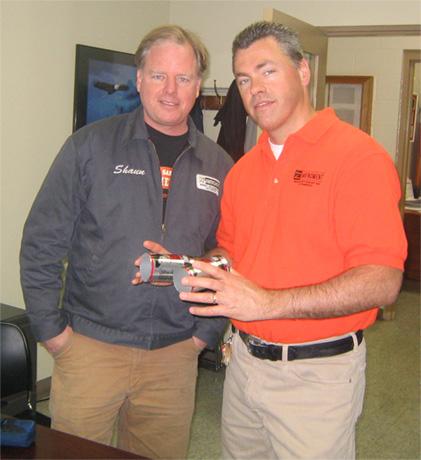 Shaun O’Sullivan and Nico Freccia examine the first test cans to insure the colors and everything else are correct before commencing the full run. 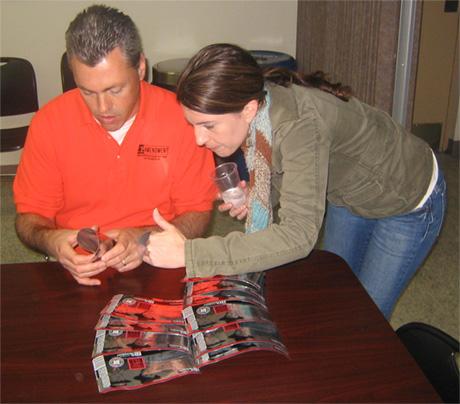 Nico and the can’s designer sign off on the can proofs. 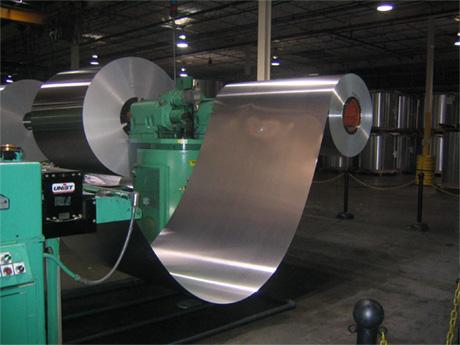 Large rolls of aluminum are used to create each can. 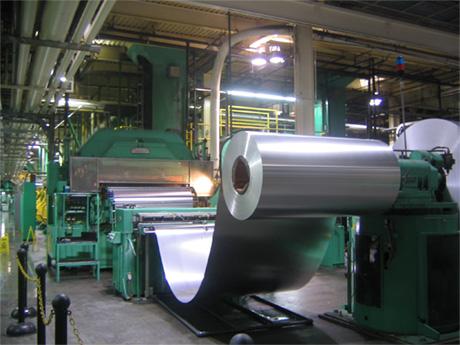 The rolls first run through a large machine that stamps out the initial shape of the can. 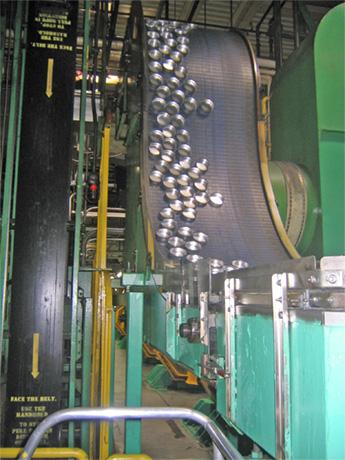 They look like small ashtrays and at this point the metal is still pretty thick. 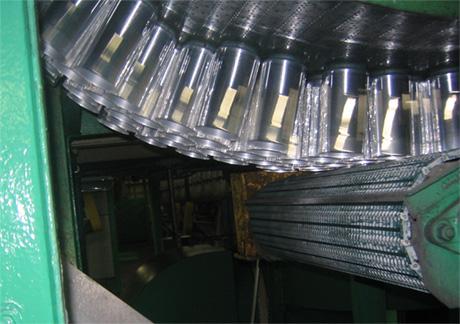 It is then stretched in stages until it’s in the familiar can shape and much thinner. 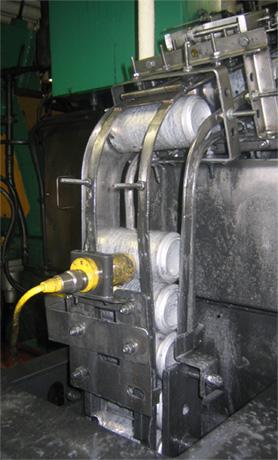 And then receives an internal coating so that the beer never actually touches metal. 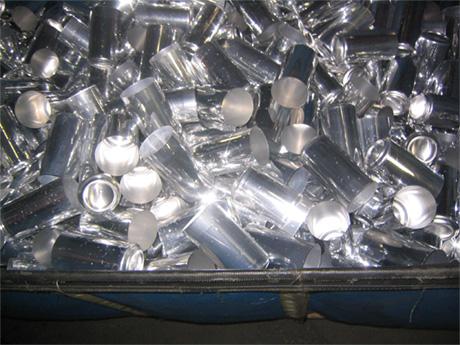 The cans are then washed and oven dried in preparation for printing. 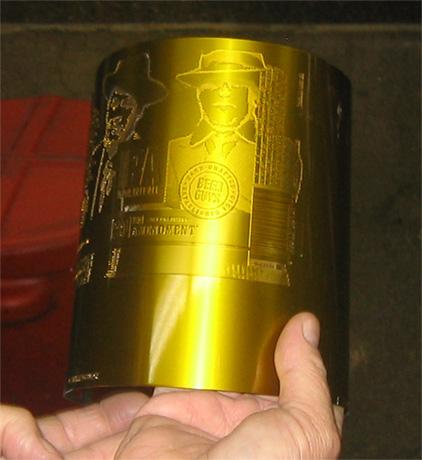 Then the blank cans are printed using a a four-color process. 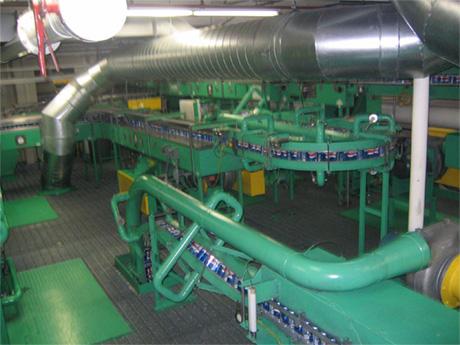 Here the plant was running some Pepsi cans through the line after being printed.

Here’s a Quicktime movie of the Pepsi cans moving swiftly on the line. You can either download the movie to your desktop or just click on the link to play it in your web browser (assuming your web browser has the quicktime plug-in installed). 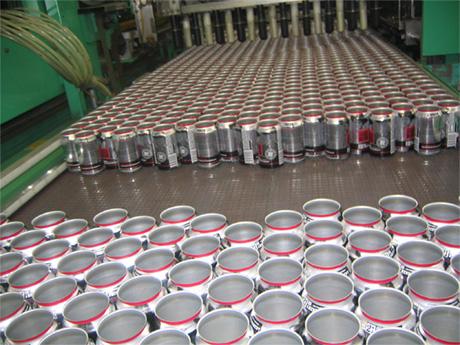 The first 21st Amendment cans running on the can line.

Here’s two more Quicktime movies of the 21st Amendment cans on the line and then a closeup of them moving tha almost resembles an optical illusion. You can either download the movie to your desktop or just click on the link to play it in your web browser (assuming your web browser has the quicktime plug-in installed).

The cans on the conveyor belt before being palletized. 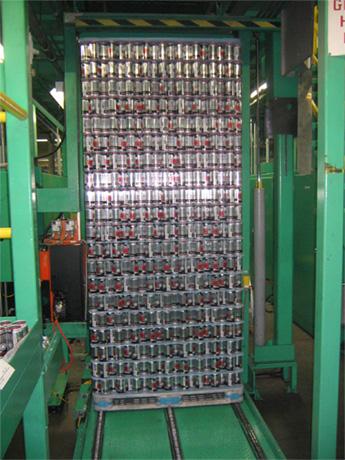 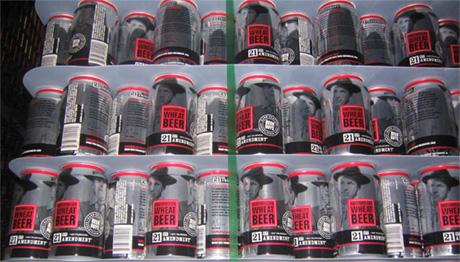 A close up of the pallet of beer cans. 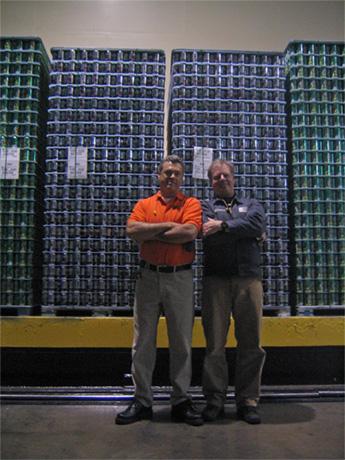 Nico and Shaun in front of the first pallets of 21st Amendment cans. 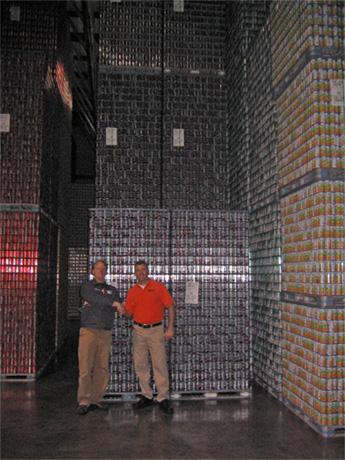 The full first run of 21st Amendment beer cans for Watermelon Wheat in the warehouse. 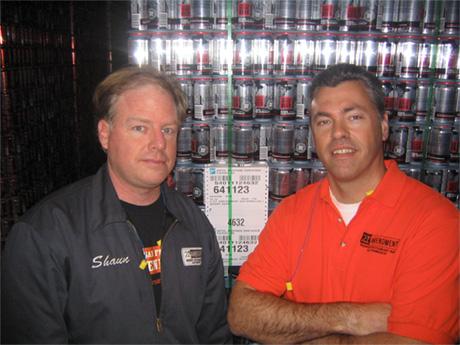 Shaun and Nico in front of the warehoused cans. Now the next step is to fill the cans, which should begin next week.

UPDATE: Part 2 of this story, how the cans are filled and sealed.

UPDATE: My review of the Watermelon Wheat in a can.