Today is Ben Spencer’s 47th birthday. Ben was the head brewer at Magnolia Gastropub & Brewery, but due to their Chapter 11 bankruptcy was making ends meet as an independent contractor. For a short time, Ben was then the Director of Operations and Brewmaster at Strike Brewing in San Jose, but more recently moved to Richmond, Virginia where he was Director of Operations and Brewmaster for Dogtown Brewing for a time, before returning to consulting work. Ben grew up in Virginia, and spent some time brewing in Colorado — and even worked for Greenpeace — before coming to the Bay Area in 2004. That’s when he left Boulder for San Francisco to make beer at Magnolia. Ben’s a terrific brewer and a great person, too, and I’m sorry the Bay Area lost him. Join me in wishing Ben a very happy birthday. 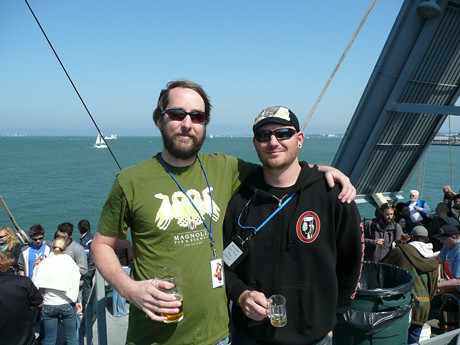 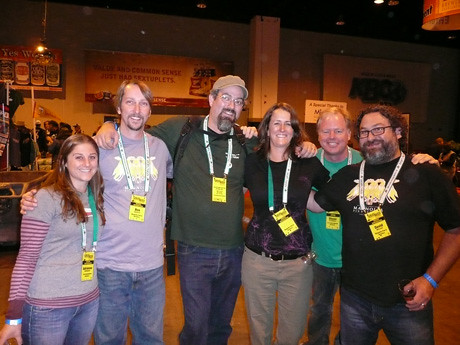 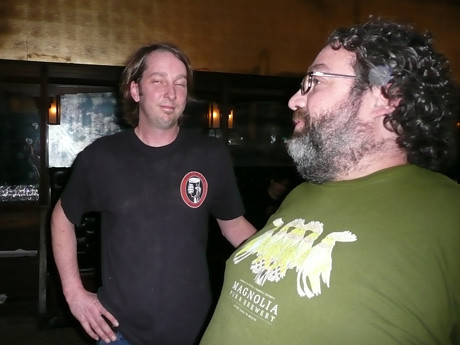 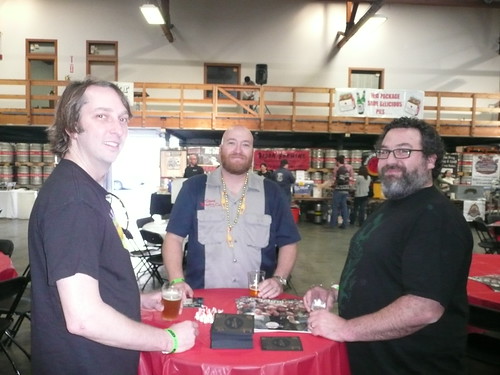 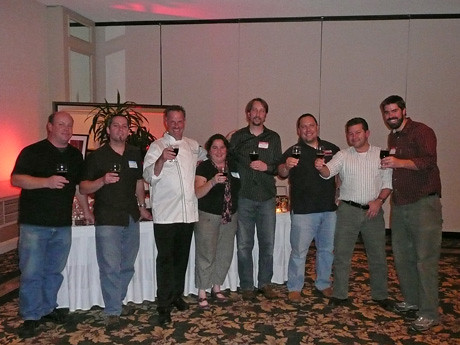 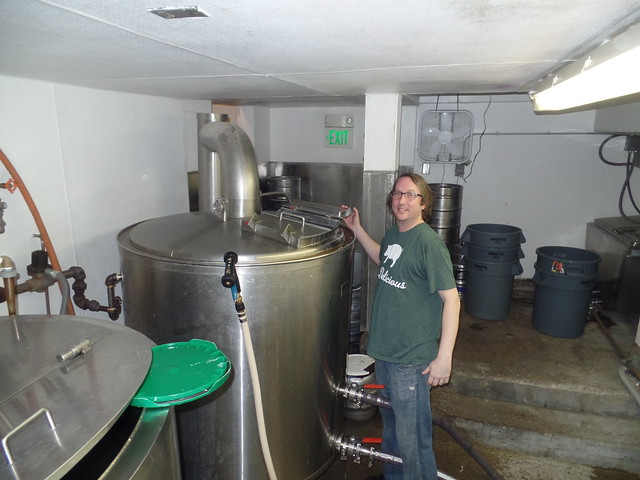 Saturday’s ad is for “Rainier Beer,” from 1916. This ad was made for the Seattle Brewing & Malting Co., who made Rainier Beer, and was later known as the Rainier Brewing Company of Seattle, Washington. This one announced Rainier’s moving of their facilities to San Francisco after Washington State enacted prohibition restrictions ahead of the national amendment and gives instructions on how to order Rainier beer after January 1, 1916.

Today is the 53rd birthday of Andy French, former brewmaster at Southern Pacific Brewing in San Francisco, one of the new wave of breweries that opened in the city a few years ago. I first met Andy when he brewed at Speakeasy, and after that would see him from time to time at Zeitgeist, though he first started brewing back East in the DC area. When his roommate Chris Lawrence, who also worked for Speakeasy once upon a time, decided to open his own brewery, he tapped Andy to work the mash paddles, and things had been going great since they opened a few years ago, though I’ve heard Andy is now back doing shifts at Zeitgeist. Join me in wishing Andy a very happy birthday. 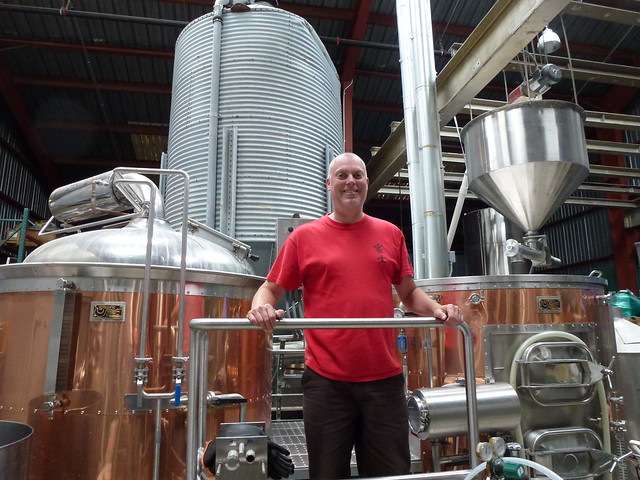 Today is the 47th birthday of fellow beer writer Brian Yaeger, author of Red, White & Brew and Oregon Breweries. Brian also writes online at his Red, White & Brew Beer Odyssey blog. A couple of years ago Brian and his lovely bride Kimberly lived in Portland, Oregon (having moved from San Francisco), but then moved to Amsterdam, then moved back to Portland, but more recently relocated once more, this time to Santa Barbara, California, and even more recently has moved back to Oregon, this time to Bend. Join me in wishing Brian a very happy birthday.

Me with Eric Rose, founder and former owner of Hollister Brewing, and Brian when I met him there for a lunch during a family vacation to Santa Barbara in 2017. 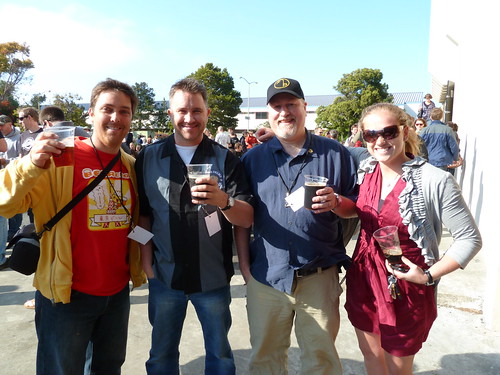 Brian with Brian Lenzo, owner of Blue Palms Brewhouse, me and Meg Gill at the Speakeasy Brewery during SF Beer Week in 2010. 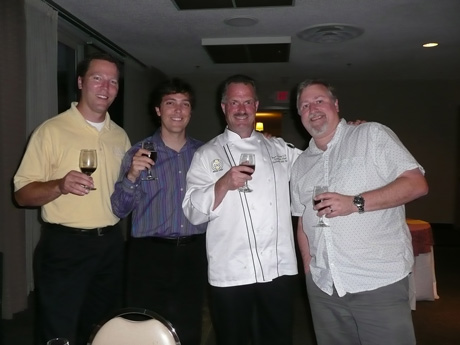 Craig Cauwels with Brian, the Beer Chef Bruce Paton and me at a Schooner’s beer dinner at Cathedral Hotel in 2008. 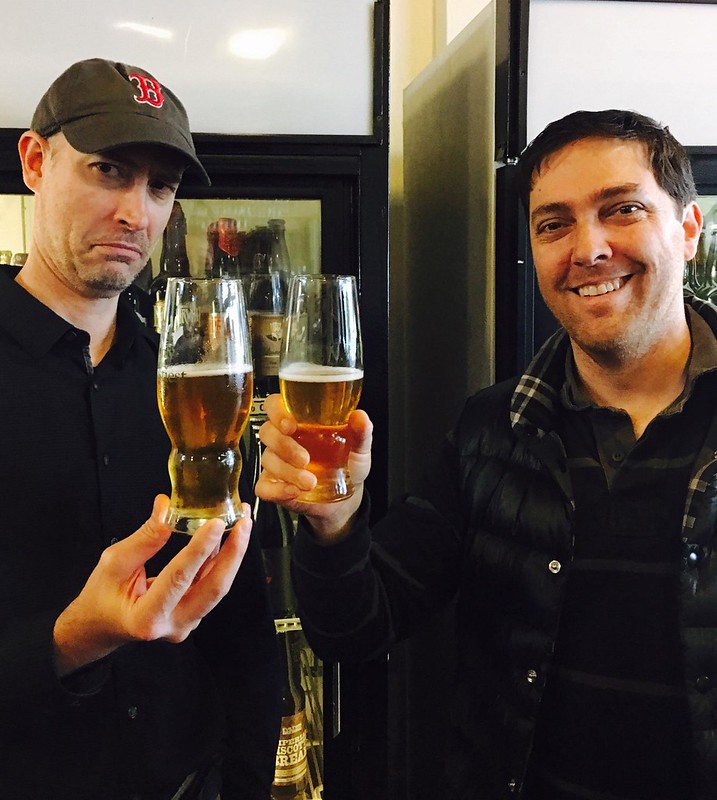 Brian and a sour Jeff Alworth [purloined from Facebook].

Today is the 54th birthday of Forest Gray, co-founder and former president of Speakeasy Ales and Lagers in San Francisco. I first met Forest when Speakeasy first bottled their beer when I was the beer buyer at BevMo. For the last many years, his brewery has made some terrific beers, especially their Big Daddy I.P.A., although the brewery has a new owner and I’m not sure how Forest is spending his time these days. Join me in wishing Forest a very happy birthday. 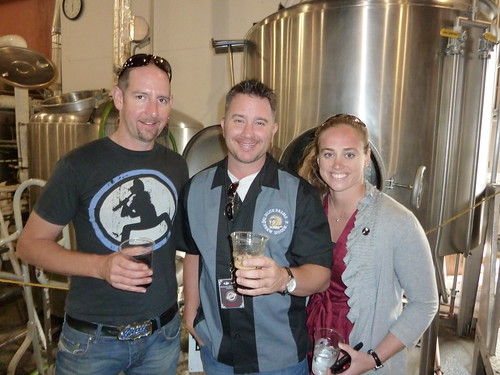 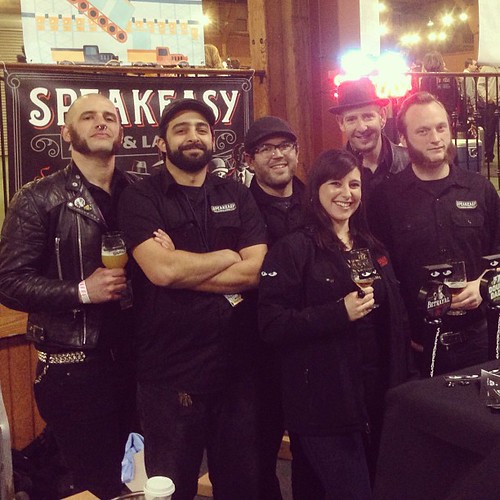 Today is 21st Amendment brewer and co-owner Shaun O’Sullivan’s 58th birthday. Shaun is a good friend and one my favorite people in the industry. He’s a tireless champion for craft beer and very supportive of other brewers, such as with his fun collaboration projects. He’s one of the founders and organizers of SF Beer Week and through his brewpub puts on many special and educational events all year, not to mention his extensive travel schedule. His new production brewery in San Leandro recently opened, and it appears to be going great. Plus, he’s one of the few people brave enough to read the rough draft of my book, Under the Table, and even claim to like it. Now that’s a friend. I just can’t say enough good things about Sully, so I’ll stop here. Join me in wishing Shaun a very Happy Birthday. 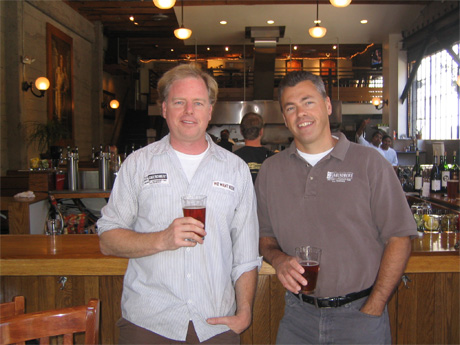 Shaun O’Sullivan and business partner Nico Freccia in the front of their brewpub. 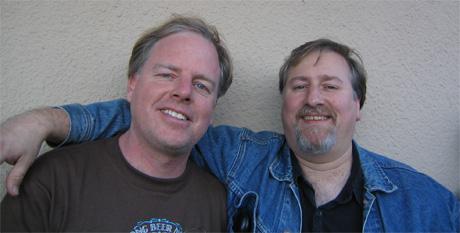 Shaun and me outside the Bistro after judging the Double IPA Festival. 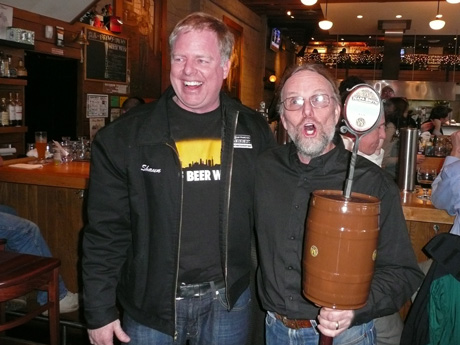 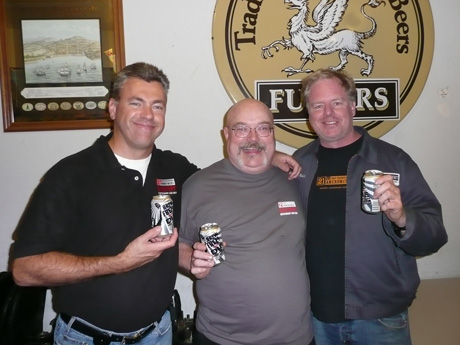 Nico with Dave Keene and Shaun at a can party at the Toronado. 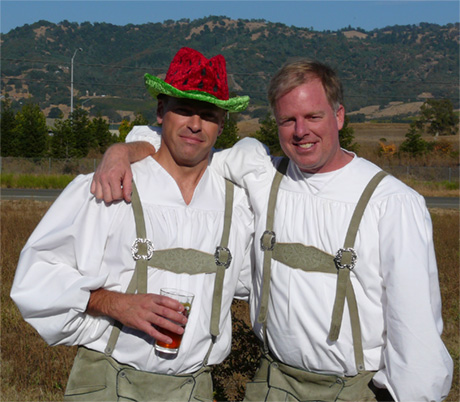 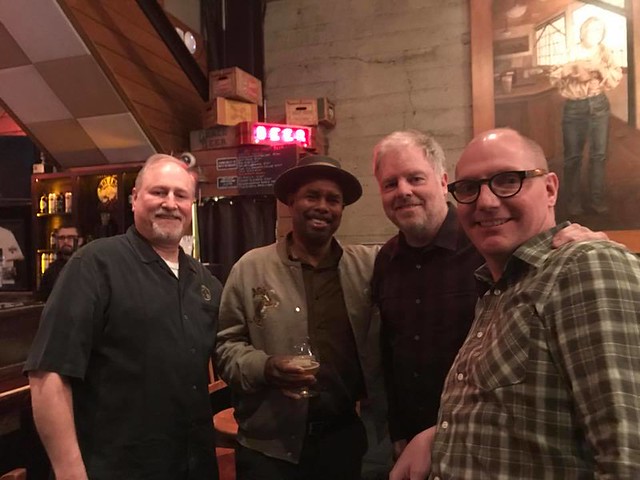 At the Brew Free! or Dine beer dinner at 21st Amendment Brewpub earier this week during SF Beer Week with Garrett Oliver, Shaun and Gordon Schuck from Funkwerks. 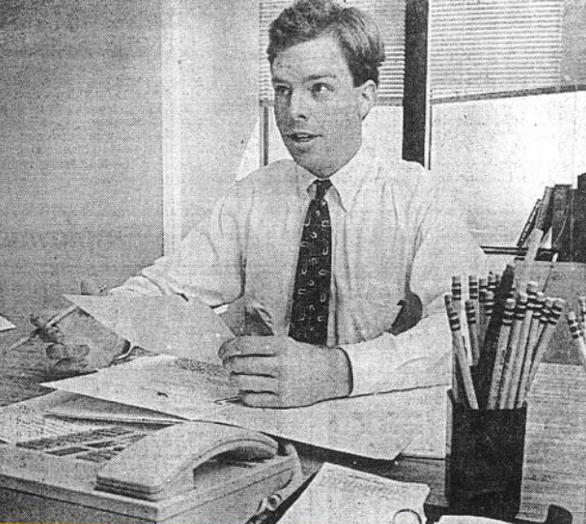 But this by far my favorite, it’s hard to understand how he could have given up all that to start a brewery.

Today is also the birthday of Brian Stechschulte, former executive director of the San Francisco Brewers Guild, who then worked for Speakeasy Ales & Lagers as their Public Relations & Media Director for a time, but since late 2017 has been the Director of Marketing for Drake’s Brewing. I’m just guessing at Brian’s age, but by my reckoning he’s got to be about 42 this year. In addition to his regular work, he also writes online at All Over Beer and Bygone Beer. Brian’s a terrific ambassador for beer and a great addition to the industry now that’s a working stiff. I think of him as a kindred spirit. Please join me in wishing Brian a very happy birthday. 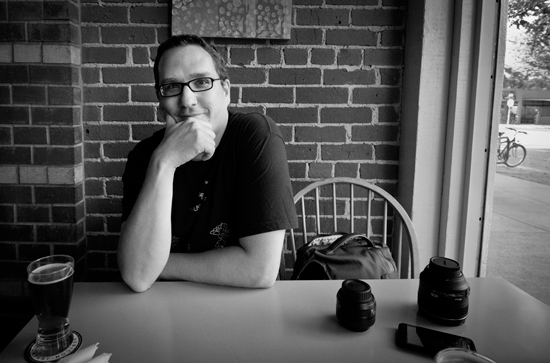 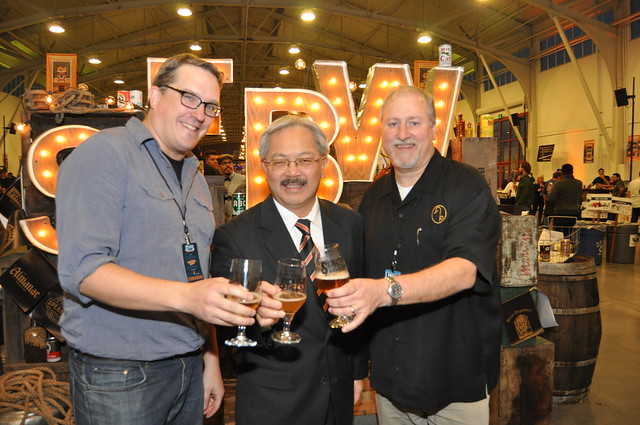 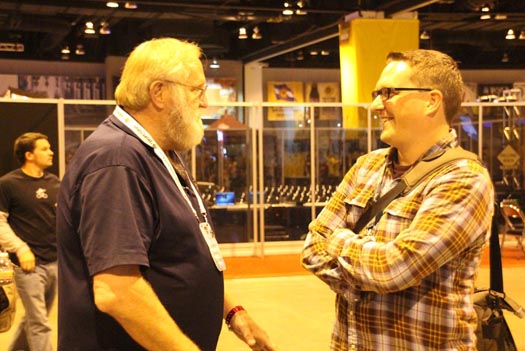 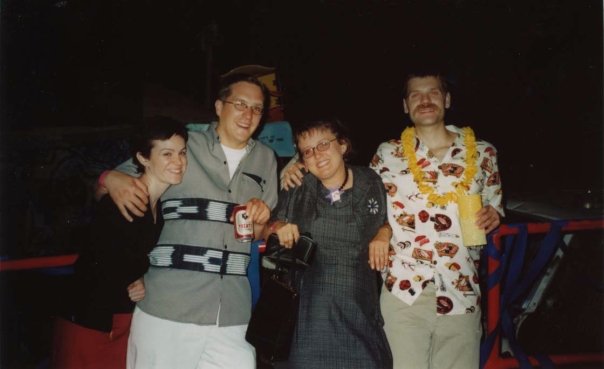 Today is the Beer Chef, Bruce Paton’s 66th birthday. Bruce has been doing fantastic dinners pairing great beer and gourmet food for almost twenty years in the Bay Area starting at Barclay’s Restaurant and Pub in Oakland and continuing at the Clift and Cathedral Hill Hotels in San Francisco. He’s has been doing events and consulting at various food and beverage operations since the hotel closed in 2009, so look for more of his beer dinners in the coming months. I’ve been to many, many of Bruce’s food events and they’re all spectacularly top notch. He did around eight each year. More recently, he’s cooking at Fermentation Labs in San Francisco. Raise a toast and stuff your face in wishing Bruce a very happy birthday. 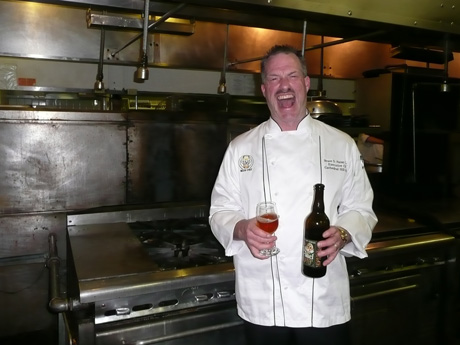 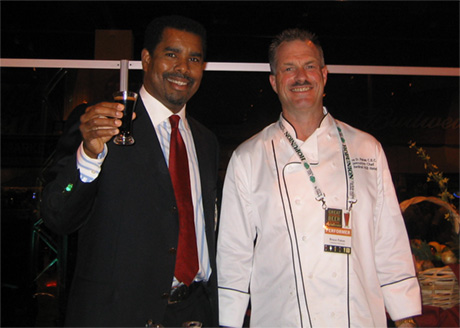 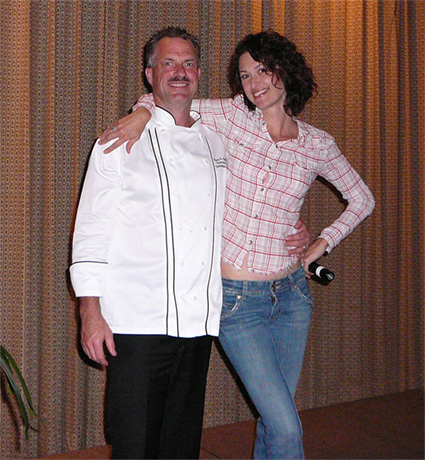 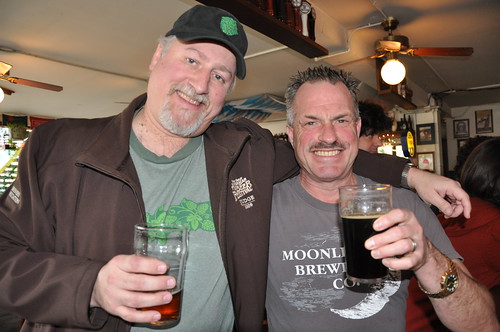 Today is the 58th birthday of Tom Riley, who is the brewmaster at Anchor Brewing. Tom grew up in the Potrero Hill area of San Francisco, not to far from the brewery he began working at in 1983. He started on the packaging line, then moved on to being a tour guide and later became an assistant brewer. Last year he was named brewmaster, only the third one at Anchor since the 1970s (not including Fritz Maytag). I’ve run into Tom over the years at events at Anchor events, but got to know him much better earlier this year working on a couple of pieces for Flagship February for which we spent considerable time talking on the phone, and he’s a terrific person. Join me in wishing Tom a very happy birthday.