Today is also the birthday of Chuck Silva, former brewmaster at Green Flash Brewing in San Diego. His West Coast IPA has taken the world by storm, and personally, I loved his Tripel and Le Freak. The big, shiny new brewery they recently built is also pretty amazing. But eventually Chuck wanted to create something of his own, and so he opened Silva Brewing Company in the Central Coast of California, around his native San Luis Obispo area in Paso Robles. Join me in wishing Chuck a very happy birthday. Chuck at GABF two years ago. The beer chef, Bruce Paton, with Chuck at one his beer dinners. Chuck at Mammoth Lakes Bluesapalooza in 2007. 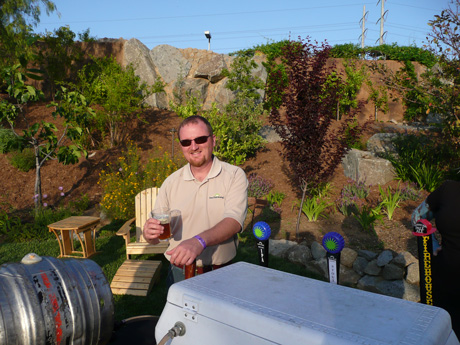 Chuck serving the symposium beer at Stone Brewing during Craft Brewers Conference in San Diego in 2008.