Today is the 61st birthday of former homebrewer extraordinaire Jamil Zainasheff, who over the last ten plus years had become something of a rock star in the homebrewing community, and especially the Bay Area. He’s also the co-author two books on beer and homebrewing: “Brewing Classic Styles: 80 Winning Recipes Anyone Can Brew” (with John Palmer) and “Yeast: The Practical Guide to Beer Fermentation” (with Chris White). In addition, he hosts the Jamil Show on The Brewing Network and has a website online entitled Mr. Malty. Jamil also turned pro a number of years ago, starting his own commercial brewery, Heretic Brewing, which is now located in Fairfield, California. And more recently they began making gin, too, which is very tasty. More recently the brewery was sold, and even more recently, Jamil announced he is not working at the brewery anymore, but I’m confident he’s be starting a new adventure soon. Join me in wishing Jamil a very happy birthday. Jamil and me judging the finals at the Toronado Barleywine festival in 2007. Jamil and me at Anchor Brewery a few years ago. 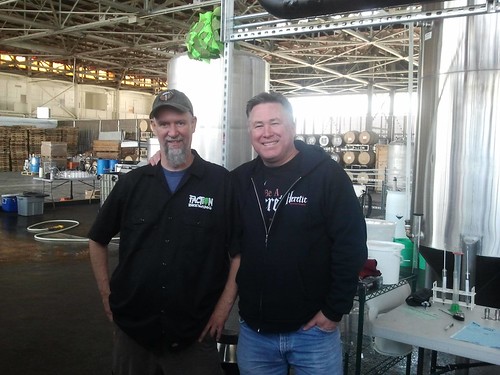 Jamil with Rodger Davis at Faction Brewing in May a couple of yeas ago. (Photo by Nathan Smith, purloined from Facebook.)