Today is the birthday of Meg Gill, founder and owner, along with Tony Yanow, of Golden Road Brewing in Los Angeles. Meg is also the former national sales manager for Speakeasy Ales & Lagers in San Francisco. When I first met Meg she was working for Oskar Blues, and later she organized the Opening Gala for SF Beer Week in years two and three, a Herculean undertaking. Golden Road made some waves a few years ago when they were acquired by Anheuser-Busch InBev, and I haven’t seen her since she went over to the “winning team,” and alienated us losers. Although she did try to pretend it didn’t happen when Golden Road announced they were building a taproom in the Temescal area of Oakland and were met with some opposition. Ultimately, it was approved and they should be building a brewpub in the near future. Still, join me in wishing Meg a very happy birthday. Justin Crossley, from the Brewing Network, with Meg at the 22nd Celebrator Anniversary Party in 2010. Faction’s (then Triple Rock’s) Rodger Davis, struggling to keep the sun out of his eyes, with Meg at the Sour Fest. Meg and me at SF Beer Week’s Opening Gala a few years ago. (Photo by Mike Condie.) 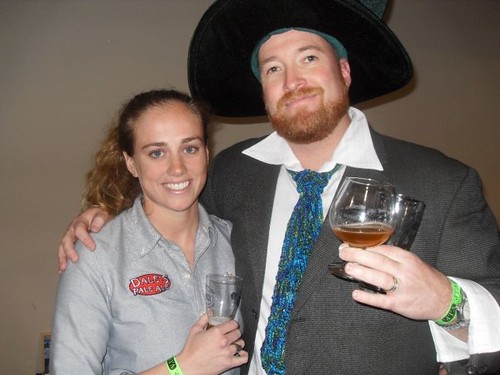 An older photo of Meg and Dave Hopwood, from Stone Brewing. (Photo purloined from Facebook.)