A few weeks ago, Charlie Papazian, at his Beer Examiner blog, launched a poll in conjunction with the upcoming American Craft Beer Week to have people vote for their choice for Beer City USA. The results are now in: 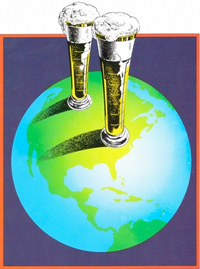 It probably goes without saying that the results are hardly scientific, but that doesn’t render them meaningless. They do, I’d suggest, indicate which local communities care deeply about their local beer culture and also have a very well-developed online presence that is able to motivate that community to action. To further clarify, I mean both conditions have to exist, both pride and performance for a particular community to be high in the rankings.

The results were, I’m sorry to say, tainted somewhat by some early ballet-stuffing that somehow got around the one vote protocol in the polling software. I guess I shouldn’t be surprised that quite a bit of it came from the Bay Area, after all this is Silicon Valley. But I was shocked all the same, and not a little embarrassed that some bad apples in my region thought cheating was the way to win, not that we were the only ones. I commend Charlie for putting a stop to that early on and decisively. I suspect that some votes that were legitimate probably didn’t get through or were discarded, but that’s what happens when you try to game the system. But I still can’t shake those lingering feelings that cast a shadow on the efficacy of the results, despite the good intentions of all the parties involved.

Still, despite that, it was a fun idea and very interesting to see which communities stepped up with swelling pride for their own local beer scenes. Congratulations to all the winners, but I’d say we’re all winners to have so many great beer destinations around the country. That wasn’t true as recently as two decades ago, maybe less. We’ve come a long way, baby.

But maybe we shouldn’t stop there. Remember all the “All-American Cities” that the National Civic League has been declaring since the 1950s? Actually 1949 was the first year the award was given to ten American communities and they’ve continued to do so each year since. “The award is the oldest community recognition program in the nation and recognizes communities whose citizens work together to identify and tackle community-wide challenges and achieve uncommon results. Since the program’s inception in 1949, more than 4,000 communities have competed and over 500 have been named All-America Cities.” Winning cities get to put up the sign below at the entrance to their community. 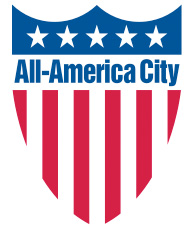 So here’s what I’m thinking. It’s a pie-in-the-sky idea, but what the hell. Nothing ventured, nothing gained. How cool would it be if there was an organization like a “National Beer Community League” that each year accepted nominations from communities who believed they were worthy of the title “Beer City USA”? There would have to be some criteria like breweries, brewpub and defined “good beer bars” per capita, the number of local festivals, beer dinners and other events, and things like that. Then maybe five communities each year get the “Beer City USA” award and are allowed to put a sign like this up. 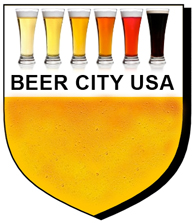