Saturday’s ad is for Pabst Blue Ribbon, from 1949. In the later 1940s, Pabst embarked on a series of ads with celebrity endorsements, photographing star actors, athletes, musicians and other famous people in their homes, enjoying Pabst Blue Ribbon beer. This one features General Henry H. Arnold, better known as simply “Hap” Arnold. He “was an American general officer holding the grades of General of the Army and General of the Air Force. Arnold was an aviation pioneer, Chief of the Air Corps (1938–1941), Commanding General of the U.S. Army Air Forces, the only U.S. Air Force general to hold five-star rank, and the only officer to hold a five-star rank in two different U.S. military services. Arnold was also the founder of Project RAND, which evolved into one of the world’s largest non-profit global policy think tanks, the RAND Corporation, and one of the founders of Pan American World Airways.

Instructed in flying by the Wright Brothers, Arnold was one of the first military pilots worldwide, and one of the first three rated pilots in the history of the United States Air Force.[nb 1] He overcame a fear of flying that resulted from his experiences with early flight, supervised the expansion of the Air Service during World War I, and became a protégé of Gen. Billy Mitchell.

Arnold rose to command the Army Air Forces immediately prior to American entry into World War II and directed its hundred-fold expansion from an organization of little more than 20,000 men and 800 first-line combat aircraft into the largest and most powerful air force in the world. An advocate of technological research and development, his tenure saw the development of the intercontinental bomber, the jet fighter, the extensive use of radar, global airlift and atomic warfare as mainstays of modern air power.”

In the ad, it says “Served to” Hap Arnold, which seems to suggest the woman is not his wife, but a different ad does identify her as Hap’s wife. He looks like he’s dressed for a 70’s disco, but this is from 1949, so I guess he was just ahead of his time. Or perhaps the Army was experimenting with uniforms that fit into civilian society better, and this was a prototype. Besides, it looks like he’s on a farm, so most likely not to close to any nightclubs. This is the largest image of the ad I could find and it’s hard to make out anything except “California,” although that other ad states that it was shot at the Arnold’s cattle ranch in Sonoma County, California, so he’s a neighbor. 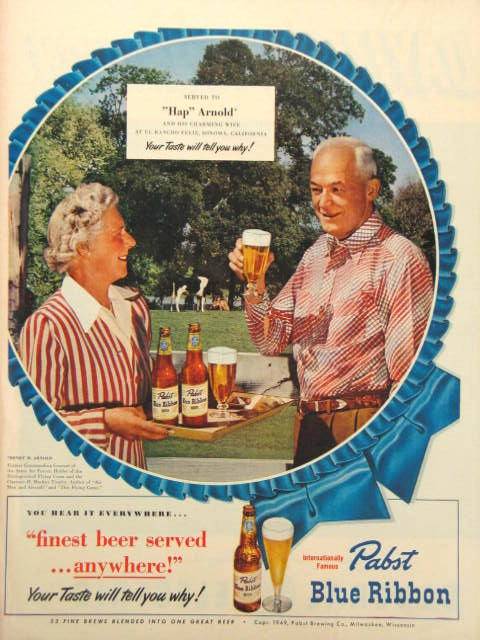