Wednesday’s ad is for Pabst Blue Ribbon, from 1949. In the later 1940s, Pabst embarked on a series of ads with celebrity endorsements, photographing star actors, athletes, musicians and other famous people in their homes, enjoying Pabst Blue Ribbon beer. This one features Mr. and Mrs. Angier Biddle Duke. He ” was an American soldier, diplomat in the United States Foreign Service and a White House aide. In 1952, at age 36, he became the youngest American ambassador in history when he was appointed to be the U.S. Ambassador to El Salvador.” He came from a very well-to-do family. Duke University was named for his family, and especially his grandfather, Benjamin Newton Duke, who was a major benefactor.

Duke became skiing editor for a sports magazine in the late 1930s. In 1940 he enlisted as a private in the United States Army Air Forces, and by discharge in 1945 was a major serving in North Africa and Europe. His uncle Anthony Joseph Drexel Biddle, Jr. was serving as ambassador to most of the governments-in-exile that were occupied by Germany during World War II.

In 1949, Duke joined the United States Foreign Service as an assistant in Buenos Aires and subsequently Madrid. From 1952 to 1953, he served as the U.S. Ambassador to El Salvador during the Truman administration and was, aged 36, the youngest ever U.S. Ambassador up to that time. With the Democratic Party out of power in 1953–1961, he left the foreign service and returned to private life. During much of this time, he served as President of the International Rescue Commission. Originally a Republican, he later became a Democrat.

In 1960, Duke accepted a call from the Kennedy administration to serve as Chief of Protocol for the U.S. Department of State with the rank of Ambassador, holding this position until 1965. His most visible task during this term was to supervise the protocol for the world leaders who attended the November 25, 1963 funeral of John F. Kennedy.

With the Democratic Party again out of power, he was again out of the U.S. Foreign Service. The Carter administration brought him back again to serve as the U.S. Ambassador to Morocco in 1979–1981.

In the ad, Angier and his second wife (of four), Margaret Screven White, are outside “Duke Farm,” their Southampton, Long Island summer home. They’re sharing a couple of beers, while she’s holding roses, presumably from their garden, while he’s holding small dog, or perhaps it’s a puppy. 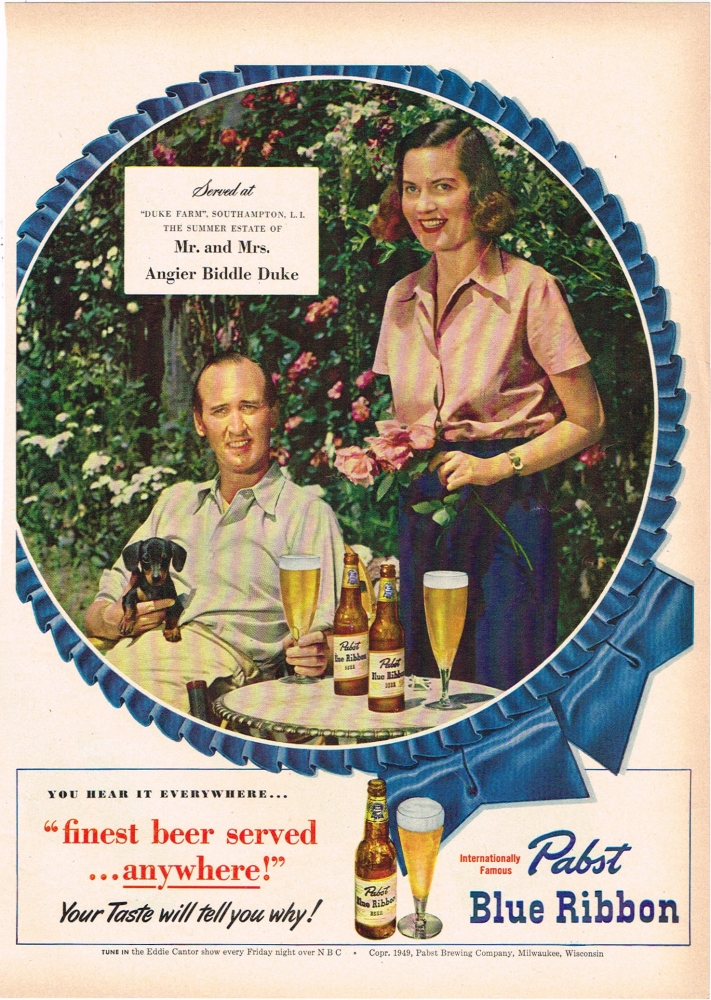