Sunday’s ad is a trade ad, by the United States Brewing Industry Foundation, from 1942. After prohibition ended, the industry started doing PSA-type ads in an attempt to create goodwill for beer and brewers. They would later go on to do a fairly sophisticated series of ads between 1946 and 1956, known unofficially as Beer Belongs. Officially, they were “The Home Life in America” series, consisting of 120 ads, with a new ad running in major periodicals each month. Last year, for my Beer in Ads series, I featured every one of them. But in the years before that, the U.S. Brewing Industry Foundation (a precursor to the original Brewer’s Association) dabbled with a variety of similar ads promoting the industry as a whole. These were especially popular during World War 2, and in fact they even won an award from the government for some of these ads. Most of the ads were black and white, although a few were in color, though usually in a minimal way, with a few colors accented rather than being in full color.

In this ad, which features the photo of an elderly woman, with the headline “Suppose An Old Lady Talks For A Change!” It will strike a discordant note to our modern notions of gender equality, but of course it was a different time and most likely didn’t ruffle many feathers in 1942, especially smack dab in the middle of World War Two. Read the whole thing at your peril, you have been warned. After laying out what a wife can, and should, do to support her husband and make his life more enjoyable after a hard day at work, she suggests. “I think it’s like that when it comes to beer and husbands and other grown ups. A man should be able to relax in at home in the way that he likes best … with a glass of mild and friendly beer, if that’s what he wants and enjoys. Served that way, by a wife’s own hand, beer is truly a beverage of moderation, as Nature intended it should be.” 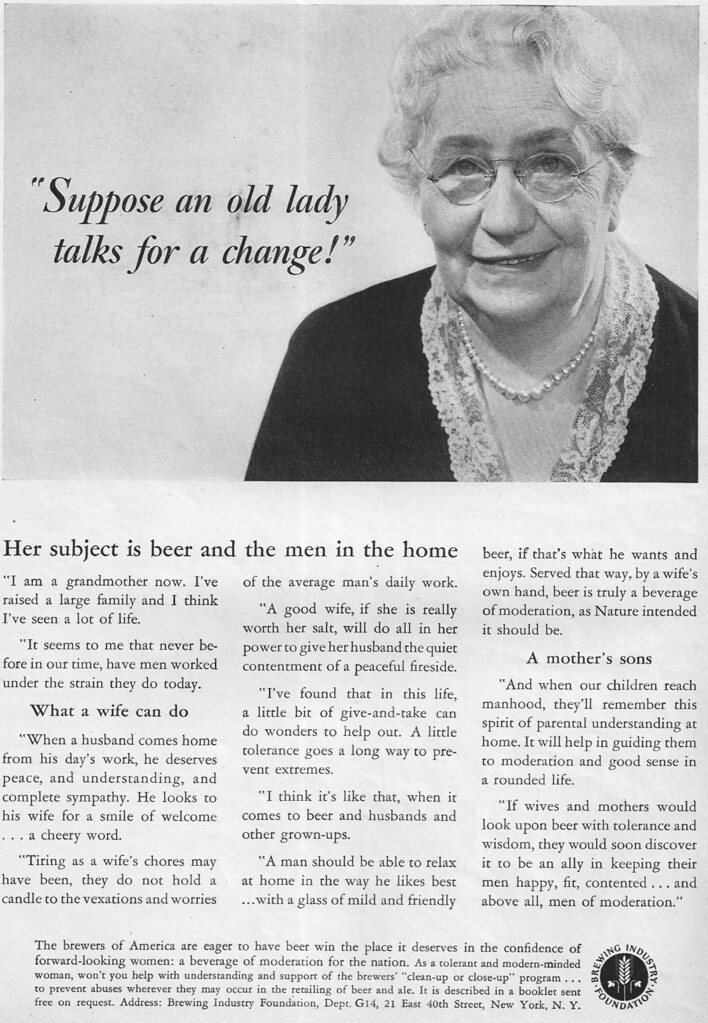