Last year, for the members of the North American Guild of Beer Writers, I set up a post-CBC symposium the day after the Craft Brewers Conference ended in Philadelphia. We’ll be doing it again in DC this year, on Friday, April 14. Essentially it’s a mini-CBC and we had six speakers, one hour each, including one panel of three, over the course of the day. When I was putting it together, I wasn’t sure what to call it, but liked the sound of symposium. Merriam-Webster defines “symposium” as “a formal meeting at which several specialists deliver short addresses on a topic or on related topics” and Dictionary.com states it’s “a meeting or conference for the discussion of some subject, especially a meeting at which several speakers talk on or discuss a topic before an audience.” 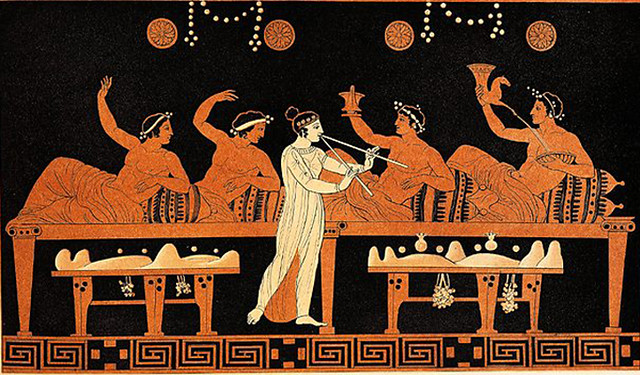 Symposium scene: a reclining youth holds aulos in one hand and gives another one to a female dancer. Tondo from an Attic red-figured Kylix, c. 490-480 BC. From Vulci.

But I just learned that it has an older, original meaning that made my choice of naming our symposium even more perfect than I’d realized. That meaning, according to Merriam-Webster is “a drinking party; especially: one following a banquet and providing music, singing, and conversation.” And dictionary.com defines it “(in ancient Greece and Rome) a convivial meeting, usually following a dinner, for drinking and intellectual conversation.”

A fresco taken from the north wall of the Tomb of the Diver
(from Paestum, Italy, c. 475 BC): a symposium scene.

This is from the Online Etymology Dictionary:

n. 1580s, “account of a gathering or party,” from Latin symposium “drinking party, symposium,” from Greek symposion “convivial gathering of the educated” (related to sympotes “drinking companion”), from syn- “together” (see syn- ) + posis “a drinking,” from a stem of Aeolic ponen “to drink,” cognate with Latin potare “to drink” (see potion ). The sense of “meeting on some subject” is from 1784. Reflecting the Greek fondness for mixing wine and intellectual discussion, the modern sense is especially from the word being used as a title for one of Plato’s dialogues. Greek plural is symposia, and the leader of one is a symposiarch (c.1600 in English).

And this is the “Did You Know?” section of Merriam-Webster:

It was drinking more than thinking that drew people to the original symposia and that gave us the word symposium. The ancient Greeks would often follow a banquet with a drinking party they called a “symposion.” That name came from “sympinein,” a verb that combines pinein, meaning “to drink,” with the prefix syn-, meaning “together.” Originally, English speakers only used “symposium” to refer to such an ancient Greek party, but in the 18th century British gentlemen’s clubs started using the word for gatherings in which intellectual conversation was fueled by drinking. By the 19th century, “symposium” had gained the more sober sense we know today, describing meetings in which the focus is more on the exchange of ideas and less on imbibing.

So that sounds about right, but with more emphasis on the imbibing, at least that was the goal. But I think I need to attend a lot more symposiums. 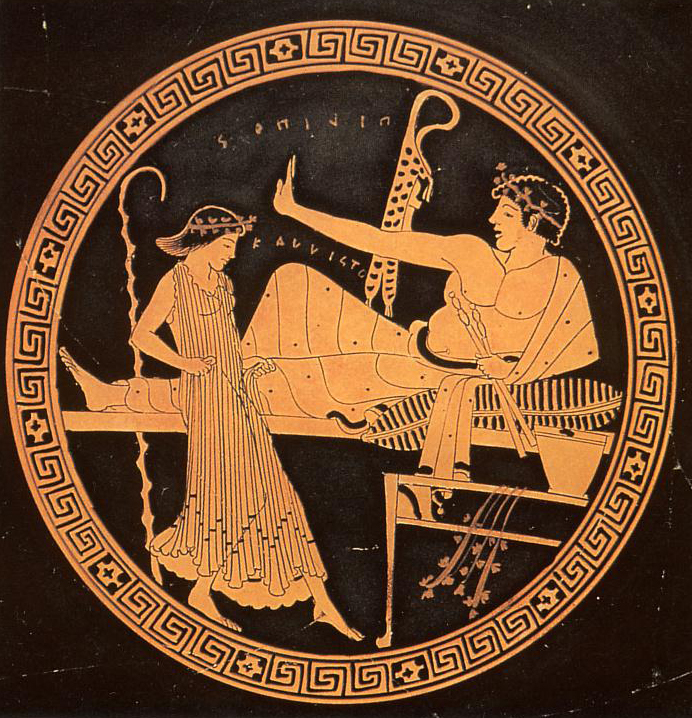