You are here: Home / Just For Fun / Boolean Logic & Beer

Today would have been the 200th birthday of George Boole, the self-taught mathematician who came up with Boolean algebra and Boolean logic. He’s been called the “father of the information age” because his Boolean logic made possible modern computer science. “Boolean algebra has been fundamental in the development of digital electronics, and is provided for in all modern programming languages. It is also used in set theory and statistics.” Boolean logic is “a form of algebra in which all values are reduced to either TRUE or FALSE. Boolean logic is especially important for computer science because it fits nicely with the binary numbering system, in which each bit has a value of either 1 or 0.” How Stuff Works has a nice overview of How Boolean Logic Works.

So what does any of this have to do with beer? Practically nothing, except that Scientific American had an article yesterday about Boole to celebrate his 200th anniversary coming up today. In the piece, The Bicentennial of George Boole, the Man Who Laid the Foundations of the Digital Age, after writing about Boole’s life and contributions to the study of mathematics, the author turns to some examples of how his Boolean logic is applied in the real world in, for instance, Google searches:

Boolean algebra and Boolean logic are very well known today, and form the backbone of electrical engineering and computer science. Indeed anyone who even casually searches the Internet , say for “Michael Jackson” the late beer and whiskey expert rather than the singer and dancer of the same name, knows how to make judicious use of AND, OR and NOT.

It’s pretty cool that he picked Michael Jackson as the search topic, and it’s a good choice since it’s hard to get just beer-centric results when the more famous Michael Jackson usually tops the list unless you figure out how to filter out the king of pop. Michael used to joke that the singer was named after him, since he was older, but it must be a pain in neck for anyone who shares a name with a person more famous them themselves. Remember the character Michael Bolton in the wonderful film “Office Space?”

I reproduced the search, and got slightly different results, but pretty funny, and cool — at least from my point of view — is in both instances one of my posts was the third result. 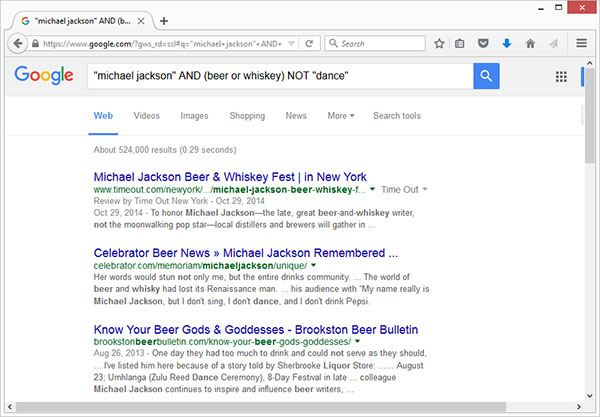 It’s a lengthy post I did a couple of years ago, Know Your Beer Gods & Goddesses, in which I researched world cultures and created a list of gods and goddesses that had something to do with beer, discovering over 100 examples. I jokingly included an entry for Michael as the “God of Beer Writers,” so that’s why my post turns up in a search for Jackson’s name. So that made my day, nice to show up in Scientific American, however tangentially.

And just to round out the ephemeral post, I’ll leave you with a little Boolean humor: 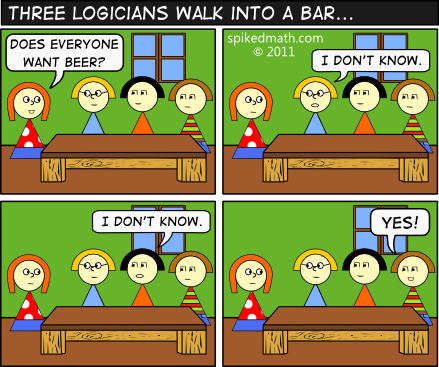