You are here: Home / Just For Fun / Camping In A Beer Can

By the time you read this, I’ll be in the mountains above Gualala, a few hours north of home, sprawled out in a rustic cabin for a much-needed battery recharge. But going camping again reminded me of something very, very cool that I saw in Boston at the Craft Brewers Conference last month. Something I so want to buy and put in my backyard, especially if I could customize it however I wanted. Anyway, at the trade show was this giant two-story beer can from Denmark (though the company now making them is from Norway) that was created as a camping vessel, originally for an annual five-day music festival, the Skanderborg Music Festival in Denmark. A Norwegian company, NewCom, licensed the the camping cans from the music festival and now owns the “exclusive rights to produce and market CAN SLEEP. [They’ve] developed a new construction solution that makes it possible to dismount the cans after use and stack them on a transport ramp to make the logistics easier. CAN SLEEP will be ready for production and shipment in 2009.” They weigh 350 kilos, or about 770 lbs.

CAN SLEEP is an innovative accommodation concept for festivals, events etc. It can also be used as fantastic billboards along the roads, at happenings, at exhibitions or or other suitable places with many people. It will in any case guaranteed draw a lot of attention.

CAN SLEEP is an identical copy of a soda/beer can in aluminum, enlarged to 2.2m [7 1/4 ft.] in diameter and 3.8m [12 1/2 ft.] in height. It can be decorated according to the owners/sponsors wish, and it can be redecorated at any time. Each can has 2 floors where (the first) floor is a small living room, and (the second) floor is a big round bed. At the festival camp they are assembled in 6-packs. The cans are extremely popular among festival participants. In 2007 the Skanderborg Music Festival got 11,000 postcards from participants that wanted to participate in a lottery where the price was a chance to rent one of the 114 cans. In 2006 the festival got over 3,000 e-mails within 30 seconds after the ordering process started. Downstairs is a small living room with chairs, lamps and space for storage. Upstairs there’s room enough for at least two people to sleep comfortably, with plenty of space to stretch out.

I so wanted to buy one on the spot and put it in my backyard. Deciding whose can design to put on it was the hardest problem I thought I’d be facing. I was thinking “sponsorship!” Alas, I was wrong. When I talked to the company rep., he told me they’re not yet in the states and when they do start selling here, the minimum will be a six-pack. Personally, I think they’re making a huge mistake. They’re missing out on a lot of sales by not selling them singly. Maybe they don’t understand the American market and its appetite for novelty.

So it’s a dead idea, dammit all. Unless, of course, I can find five other people in the Bay Area and we can all go in on a six-pack? Anybody interested? Sadly, I don’t have any idea about the actual cost, but that’s a bridge I’m willing to cross once we get there. I thought perhaps that my wife might put the kibosh on having a twelve-foot beer can in our back yard, but she immediately saw the appeal of it and was almost as excited as I was. That’s why I love her. All I need now is five more like-minded people. I took a bunch more photos of it in Boston, and you can see them here. 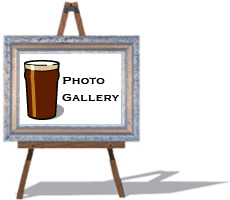 For many more photos of the Can Sleep camping beer can, including a promotional video, visit the photo gallery.