Last month, Monk’s Cafe and Beer Emporium in Philadelphia, Pennsylvania hosted a unique beer dinner with beer cook Lucy Saunders at the helm to support her new book, Grilling with Beer. All of the beers paired with each course was a craft beer in a can. A growing trend among small brewers, there are better than two dozen now putting their beer in a can. The Philadelphia Inquirer attended and reviewed the dinner, titling their article “Can do — craft-beer makers kicking glass, going metal.” Lucy sent me some of her photos from the dinner. 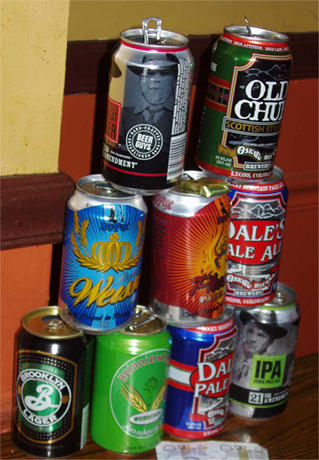 Lucy also was kind enough to provide her write-up of the event:

Craft brewers certainly can be proud of canned beer – at least, that’s the take-home message from a celebration of all-American grilled food and canned brews at Monk’s Café, Philadelphia, PA, in May.

To help Lucy Saunders launch her newest book, Grilling with Beer, Chef Adam Glickman and his culinary team prepared a banquet of BBQ ribs and fixings. Hosts Fergus Carey and Tom Peters called on top craft brewers offering their wares in cans to share the bounty.

Answering the call from San Francisco, California, brewer Shaun O’Sullivan of the 21st Amendment traveled cross-continent to celebrate his birthday at Monk’s, bringing both the stellar Watermelon Wheat Ale and the IPA in cans. Chuck Williamson drove all the way from Garrattsville, across NY state to deliver cold cases of Heinnieweisse to the door. (Cans do travel well, provided they are kept cold.)

And at the end, we pulled the pop-tops off of cans of Old Chub Scottish ale, malty and rich enough to handle the Adult S’mores, stuffed with melted bittersweet Belgian chocolate and marshmallows made with St. Bernardus.

It was a cook-out to celebrate craft beer tasting just as the brewers intended, served from cool and classic aluminum cans, so convenient for any BBQ with beer. That’s why I think of cans as mini-kegs, perfect for keeping flavors fresh. 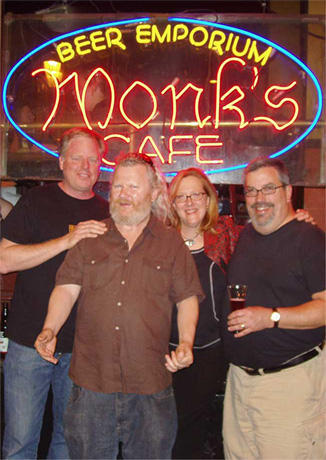 For more photos by Lucy Saunders from the beer dinner, visit the photo gallery.