You are here: Home / Beers / Dan Aykroyd For Schlafly Beer

Paul A. Ner, who writes By the Pint, tweeted a fun photo of SNL alum and Blues Bro Dan Aykroyd holding a bottle of Schlafly Pale Ale. 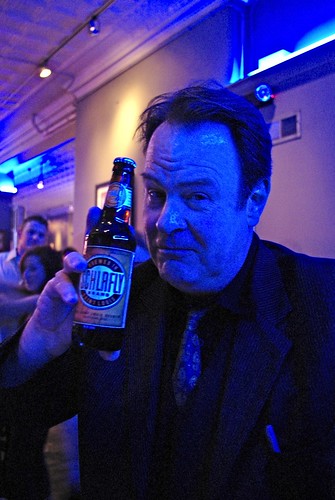 Nice, I’m convinced one of the ways to pull more people into the craft beer world is through celebrity endorsements, not paid ones, just by seeing more and more famous folks drinking craft beer. Somewhere I have a current TV show star drinking a Drake’s IPA through a straw. I’m going to have to dig that up.

It reminds of a famous marketing strategy I learned about in college, perhaps one of the first stealth marketing campaigns. The Lacoste brand — the one with the crocodile on polo shirts — did well in Europe but not in the U.S. So in the late fifties and early sixties they began sending free shirts to famous people; movie stars, politicians, etc. Low and behold the shirts starting showing up in magazine, newspaper and newsreel photos of the celebrities and sales began to take off. Perhaps we should do something similar, maybe a Flickr pool of the famous drinking craft beer.