No, I don’t been those lumbering giants making flavorless beer-like industrial beverages which we all hope might one day become extinct, I’m talking about a beer made with roughly 45-million-year old yeast found in a bug entombed in amber, and extracted just like the plot of Michael Crichton’s Jurassic Park. This time around, the story involves Fossil Fuels Brewing Co., whose owners include Dr. Raul J. Cano, the Emeritus Professor at Cal. Poly in San Luis Obispo who originally made the discovery. According to the story in today’s Washington Post, the breakthrough came last month.

“I was going through my collection, going, ‘Gee whiz — this is pretty nifty. Maybe we could use it to make beer,’ ” says Cano, 63, now the director of the Environmental Biotechnology Institute at California Polytechnic State University in San Luis Obispo.

Last month? Hold on just a second. First of all the article mentions the following:

In April, at the World Beer Cup in San Diego, “we had one judge give us the highest marks, one just below and one who didn’t like it,” says Chip Lambert, 63, the company’s other second microbiologist. “We learned that the issue was that in these competitions, you brew to match the traditional concept of the style, which these yeast just don’t do.”

Ignoring for the moment that the World Beer Cup isn’t judged like that (there are no “highest marks” or anything similar), the Washington Post published this article yesterday, September 1. That would mean the World Beer Cup took place five months ago, not to mention that to enter that competition you have to register and submit your beer well in advance of the actual judging. I’m not trying to quibble with the story, a least that wasn’t my original intent, but this just doesn’t add up. Last month? Setting all that aside for the moment, I wrote about this two years ago, when Stumptown Brewing, in Guernville, California, made a beer called Tyrannosaurus-Rat, also using Dr. Cano’s ancient yeast.

This is part of what I wrote in Fall of 2006 in the Celebrator Beer News, reviewing a beer and barbecue festival held along the Guernville River at Stumptown:

But as good as the barbecue was, I was there for the beer. I was particularly keen to try what Stumptown was billing as a beer made with the world’s oldest yeast. Their “Tyrannosaurus-Rat” — or T-Rat for short — was essentially their popular “Rat Bastard,” but brewed using yeast that was 30 million years-old, give or take a few million years! How it got to be in Stumptown’s beer is nearly as interesting as the beer itself. It was discovered in the Dominican Republic trapped inside of a bee that was also trapped inside of a piece of amber, a terrific preservative. And the bee had been there for somewhere between 25 and 40 million years. Dr. Raul J. Cano, Emeritus Professor at Cal. Poly in San Luis Obispo, made the discovery in 1995 and managed to extract living bacterium, including a few strains of yeast, directly from the bee’s stomach. The ancient microorganisms were patented and also inspired the movie “Jurassic Park II.” It fell into Stumptown’s lap during a ski trip where the Hackett’s met a friend of Dr. Cano, and the rest, as they say, is literally ancient history.

I tried the T-Rat alongside of its modern counterpart, Rat Bastard, as they were the same in all respects except for the yeast. The Rat Bastard is a well-made pale ale, with good aromas and a crisp, clean palate. It has a generous hop bite that finishes bitter, then drops off sharply in the end. The T-Rat was much smoother, with softer, fruity flavor characteristics and just a touch of lemony sweetness that wasn’t tart. The finish is quite clean, with just a quiet hop presence lingering. While they’re both good beers, I think the T-Rat has a more complex, developed taste profile but its smoothness makes it great. The fact that it was made with such an old yeast is fascinating and given how good the beer is, no mere novelty.

There are also other anomalies. In my story, which relied primarily on Stumptown’s information, the yeast was found in a bee from the Dominican Republic. The Washington Post account, however, lists the Lebanese weevil as the yeast carrier. On top of that Dr. George Poinar, who was also involved in finding and extracting the DNA from amber, says on his biography web page that its age was 125 million-years old.

And here is the original press release for Stumptown’s version of the beer, from June 27, 2006:

For the first time, 25-40 million year old yeast has been used to brew a commercial batch of beer (“Tyrannosaurus Rat”) to be made available to the public on July 8th at Stumptown Brewery (15045 River Rd. Guerneville, Ca.). Dr. Raul Cano, Lewis “Chip” Lambert, and Peter Hackett will be celebrating this historic event and available for questions from 11:00A.M. on Saturday July 8th.

The public tasting of the T-Rat is the culmination of coincidences that involved a 20-40 million-year old bee trapped in amber and discovered in the Dominican Republic, a pair of renowned scientists, a ski weekend and an award winning microbrewery.

Amber is nature’s perfect preservative. It desiccates its specimens and protects them from damaging radiation of all types. Man has successfully used it to preserve their dead for thousands of years; Nature has preserved many of its inhabitants, including the recently identified spider web, in their elegant tombs for tens of millions of years.

Dr. Raul J. Cano, Emeritus Professor at California Polytechnic State University, San Luis Obispo, reported in Science (Volume 268, May 19, 1995) that he extracted a living bacterium from the gut of a stingless bee entombed in amber 25 – 40 million years ago. Independently, Lewis (Chip) Lambert, Fremont, CA, at the time Director of Pre-Clinical Research at a Bay Area biotech company, confirmed his work in a very skeptical scientific environment that has, for the most part, accepted its validity. In addition, Raul’s work became the underlying premise for the movie Jurassic Park.

The patented ancient microorganisms (USPO#5,593,883) became the focus of a new company based on the potential use of these microbial isolates for industrial and medical applications, and the hunt began. From the ancient-amber library came a few yeast strains and with them, the question, could they be used to make beer? The answer was a resounding yes as very good beer was brewed for the Jurassic Park II cast party and Raul’s daughter’s wedding reception.

The partners then proposed trials of these ancient yeasts to numerous microbreweries. Much to their surprise, in an industry that thrives on innovation, found a lack of enthusiasm among commercial breweries.

Fast forward a few years to the snowy slopes of Alpine Meadows where Carla Hackett was taking a ski lesson from Raul’s now friend and business partner, Chip. Carla had all the attributes of a great skier that her husband, an Aussie who owns the Stumptown Brewery in Guerneville, lacks. On the second, never the first, ride up the chair lift, an important relationship was established when the question was raised, “would you like to make some beer with some patented, 35-million year-old yeast?” The affirmative response started a brewing relationship between Stumptown Brewery and Environmental Diagnostics, Inc.

This random path led the ancient yeast to Stumptown Brewery on May 6th where Peter, Owner/Brewer, put the yeast to work. On June 21st came the news that “T-Rat” had finished fermenting and was conditioning. Perhaps most importantly, that it’s “very good, very unique. The yeast character is unusual, exotic, and very pronounced”. 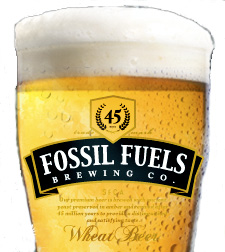 On page two of the Post piece they finally do mention Stumptown’s involvement. The new versions, which include a wheat beer and a pale ale, are made at Kelley Bros. Brewing, which is in Manteca, California. I really enjoyed the pale ale version that Stumptown brewed and will eagerly try these two new versions. But I’m still a bit bewildered by the discrepancies that seem to accompany this story. But I guess history itself is a lot like that, so maybe it’s fitting after all. I wonder what “Cheers” is in dinosaur-speak? “Here’s tar in your eye?”