The new beer by Dogfish Head is described as “a bold, dark beer that’s a fusion of three threads imperial stout and one thread honey beer with gesho root, a gustatory analog to Miles’ masterpiece.” It also features the “the album’s iconic artwork, created by the late Mati Klarwein, on its label, Dogfish Head’s Bitches Brew will be unveiled at Savor, An American Craft Beer & Food Experience tonight at the National Building Museum, Washington DC. The beer will be bottled in 750ml bottles and released through Dogfish’s distribution network in late August. 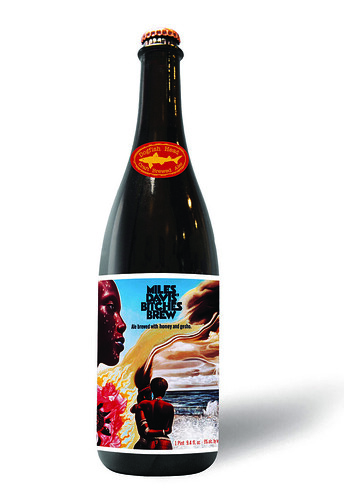 The newly created ale is designed, according to Dogfish founder and president Sam Calagione, “as the ultimate partner for chili or spicy curry chicken” and best enjoyed “sipped cool, not cold, from a snifter or red wine glass while listening to the Bitches Brew album.”

Calagione was drawn to the alchemical spirits in Bitches Brew right out of college, acquiring a copy of the album “within months of the first time I brewed a batch of homebrew in my apartment in New York City.  I listened to it when I was writing my Dogfish business plan.  I wanted Dogfish Head to be a maniacally inventive and creative brewery, analog beer for the digital age.  You could say that my dream was to have Dogfish Head, in some small way, stand for the same thing in the beer world that Bitches Brew stands for in the jazz world.  You can imagine how excited we are to be doing this project 17 years after I wrote that business plan.”

“There’s a spirit of innovation, of creativity and individuality, that’s at the core of Miles’ music,” said Adam Block, Senior Vice President and General Manager, Legacy Recordings.  “Sam and Dogfish Head approach their art from the same place and consequently the marriage is an easy and cool one.”

Later this year, on August 31, an anniversary edition of the recording — two, actually: a Legacy Edition and a deluxe Collector’s Edition — will be released on CD.