Today Dust Bowl Brewing of Turlock announced plans to build a new $10 million, 30,000 sq. ft. brewery in their hometown. The new facility is expected to be completed in November 2015, and will be located west of Highway 99, on the corner of Fulkerth Road and Dianne Drive, across from the Turlock Auto Plaza. According to the press release, “the new facility will have initial capacity of 17,000 barrels per year. Dust Bowl Brewing Co. projects sales of 10,000 barrels in the first 12 months, more than doubling current annual sales. The master plan allows room for expansion up to 100,000 barrels per year.”

“We bought the open land in 2013 and have been in the planning stages ever since,” shares Brett Tate, founder of Dust Bowl Brewing Company. “We’ve outgrown our current facility and are poised for expanded production and distribution. The craft industry is on the rise and we’re excited to be part of the upward movement.” 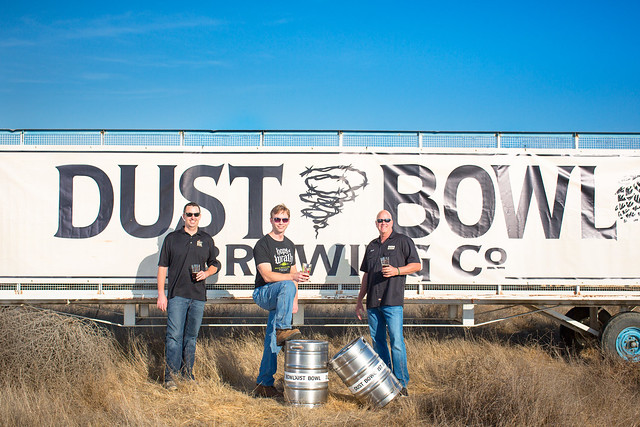 Founders Brett Honore and Brett Tate, with brewmaster Don Oliver in the middle.

“We bought the open land in 2013 and have been in the planning stages ever since,” shares Brett Tate, founder of Dust Bowl Brewing Company. “We’ve outgrown our current facility and are poised for expanded production and distribution. The craft industry is on the rise and we’re excited to be part of the upward movement.”

The new brewery brings significant growth to the young company. Brewmaster Don Oliver notes, “The nearly fully automated brewhouse will allow us to brew 64 barrel brews on our smaller beers in the 5% ABV range and 50 barrel batches on our bigger beers.” CFT Packaging, based in Parma, Italy, will be providing the majority of the brewery equipment, including the malt silos and handling, brewhouse, fermentation, brite tanks and a 125 bottle-per-minute bottling line. “The level of automation will allow us to improve our consistency on all products,” Oliver continues. “The new facility will also have a Quality Assurance lab, which will allow us greater control of the quality of the increased volume of beer.”

The initial product mix will focus on producing more of the company’s established styles. “Our flagship “Hops of Wrath” IPA will drive sales into new markets, so it’s essential to increase production. This particular beer showcases the Dust Bowl Brewing Co. branding and experience…a great IPA inspired by the Dust Bowl era,” comments Tate. “Differentiating and building a craft brand goes beyond quality; you have to provide an overall lasting experience with the consumer.” The company will expand its overall portfolio to include several year-round styles in bottles as well as increase its seasonal and specialty offerings. “The expanded capacity gives us room to be creative, and keep our Tap Room and other draft accounts well stocked with a nice variety of beers,” adds Tate.

The new facility is located off of Highway 99, where over 100,000 cars travel daily. The close proximity will offer easy freight access, provide excellent brand exposure as well as attract visitors. Owner Brett Honoré sheds some light on the brewery’s future plans. “We envision the new facility to evolve into a local destination and full-service venue. It’s going to be a very cool place for day-trippers and locals alike. Plans include a tasting room with a clear view of the brewing operation and packaging, outdoor patio and lounge seating, tours, and retail space to sell our beers and logo items. We eventually want to create an outdoor venue for special events.

An architect’s drawing of the what the new brewery will look like.