First there was Nude Beer (in its many incarnations), then Wanker, Skinny Blonde Ale and now comes the latest beer to play to the basest instincts of the male beer drinker: lingerie canned beer with fishnet stockings. 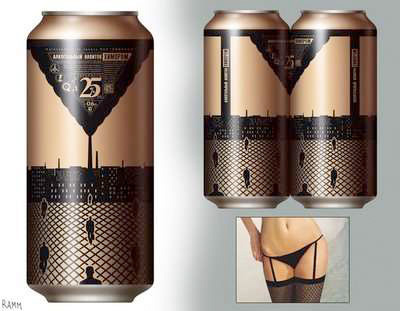 At least that was my original thought. The Fishnet Cans have been blogged and re-blogged all over that series of tubes known as the internet. But, as it turns out, they are just one of a pretty big series of can designs by Russian artist/illustrator Ramm ND. It’s not necessarily his or her fault that so many chose to highlight the one prurient themed can and ignored the more poignant works. Human nature is what it is. Take a closer look at the Fishnet Cans and you’ll begin to see new details that defy it being simply to titillate. Then take a look at his entire oeuvre of cans. Some are beer and some are soda, but they’re all more interesting than I would have guessed from just seeing the one in fishnets.

In fact, going through Ramm’s entire portfolio is eye-opening. And I think he’s making some larger points. These aren’t just can designs, they’re works of art using cans as the medium.

Ramm also has another portfolio on Coroflot.