You are here: Home / Beers / Guy de Maupassant’s “Waiter, A Glass Of Beer!”

Today is the birthday of French writer Guy de Maupassant. He was a prolific writer, very popular during his lifetime, and “considered one of the fathers of the modern short story and one of the form’s finest exponents.” He wrote half-a-dozen novels and around 240 short stories. One of them was entitled “Waiter, A Glass of Beer!,” although since the original was in French, it’s sometimes translated as “Waiter, A Bock!” It’s a somewhat melancholy tale, but there’s a couple of great quotes in the story, like how the barfly describes his life:

I get up out of bed at noon. I come here, I have a meal, I drink beer, I wait for the evening, I have dinner, I drink beer, and then, about half-past one in the morning, I go home to bed again, because, you see, they close at that hour—which is a nuisance. I have probably spent six years out of the last ten on this seat, in this corner, and the rest of the time in bed—none of it anywhere else. Occasionally I have a chat with some of the guests.

And in the “Bock” version of the story, the barfly is referred to as a “regular” in the beer bar, but in the “glass of beer” version they use an interesting term I hadn’t heard before: a “beerite,” which he describes as “one of those habitual frequenters of beer-palaces who come in the morning when the doors open, and leave when they close for the night.” I may have to try to get that word back into common usage, if indeed it ever was.

Because it’s in the public domain, several versions are available online. I’ve reprinted the Bartelby version below, but you can see others, such as one of the Bock versions at Classic Short Stories or at Google Books’ version at The Complete Short Stories of Guy de Maupassant. Enjoy. 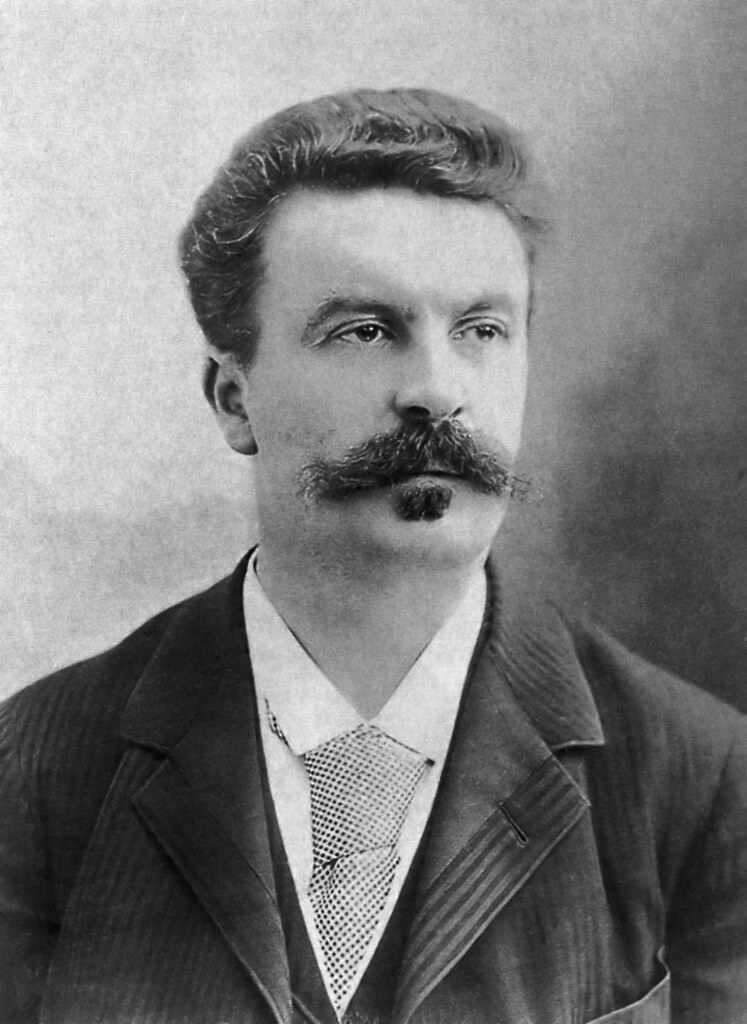 A photograph of Guy de Passant taken in 1888.

I WAS going nowhere in particular. I was merely taking a stroll after dinner. I passed the Lyonnais Bank, the Rue Vivienne, and other streets besides. Suddenly I halted before a half-empty beer-palace. With no special object in view—for I was not thirsty—I went in.

Casting a glance about for a comfortable place, I took a seat next to a man who looked rather old, and was smoking a cheap clay pipe, which was as black as coal. Half a dozen glass saucers piled up on the table in front of him indicated the number of glasses he had already consumed. I paid no closer attention to my neighbor, recognizing him at once for a “beerite,” one of those habitual frequenters of beer-palaces who come in the morning when the doors open, and leave when they close for the night. He was untidy, and bald on the top of his head, a shock of long, greasy, pepper-and-salt hair falling upon his coat collar. His clothes, which were too loose, had apparently been made at a time when he was stouter. One suspected that his trousers were not fastened on tight, and that every ten yards the wearer would have to stop and pull up that erratic garment. Had he a waistcoat on? The bare thought of his boots, and of what they might contain, made me shudder. His frayed cuffs were a deep black all round the edges—just like his nails.

No sooner had I sat down beside this individual, than he coolly addressed me:

I turned toward him in surprise, and looked him over. Then he resumed:

“You don’t recognize me?”

I was dumfounded. It was Count Jean des Barrets, an intimate friend of college days. I shook hands with him, but was too much perturbed to bring out a syllable. At last I stammered:

To which he placidly replied:

That was all he said. I tried to be civil, and racked my brain for an observation to make. At last I put the question:

“And—er—what are you doing at present?”

He answered in a tone of resignation:

I felt myself blushing. Nevertheless, I braved it out:

After puffing out an enormous cloud of smoke, he replied:

“It’s the same thing every day.”

Thereupon, giving the marble surface of the table a rat-tat-tat with a copper coin, he exclaimed:

A distant voice repeated, “Two glasses of beer!” A voice still more distant shouted a strident “Here you are!” Then appeared a man in a white apron, carrying two glasses, from which he spilt a few yellow drops as he shuffled speedily across the sanded floor.

Des Barrets emptied his glass at a single draft, and put it back on the table, sucking off the foam which had remained on his mustache. After this he inquired:

I really had nothing new to tell him, and so I muttered:

In the same even tone he asked me:

“Oh! And do you find that amusing?”

“No. But it can’t be helped. A fellow must do something or other.”

“Well—er—so as to have his time occupied.”

“What’s the use of that? I never do anything, as you see—no, not a thing. If one is poor, I understand that one must work. But as long as one has anything to live upon, then it’s quite unnecessary. Work—why work? Are you doing it for yourself or for others? If you are doing it for yourself, I suppose you enjoy it, and then it’s all right; if you do it for somebody else, you’re an idiot!”

Then, resting his pipe on the marble slab, he again cried out aloud:

Turning back to me, he continued:

“Talking makes me thirsty. I am not used to it. No, I have no occupation; I do nothing but simply grow old. I shall have nothing to grieve for when I die. This beer-palace will be my only parting memory. No wife—no children—no cares—no worry. That’s the best way.”

He drained the tall glass brought him, wiped his mouth with the back of his hand, and took to his pipe once more.

I was stupefied. Presently I said:

“I beg your pardon, always; ever since I left college.”

“But this is no life for you, my dear fellow! Why, it’s horrible! Surely you have something to do—you must have friends—you must be attached to somebody or something?”

“Not at all. I get up out of bed at noon. I come here, I have a meal, I drink beer, I wait for the evening, I have dinner, I drink beer, and then, about half-past one in the morning, I go home to bed again, because, you see, they close at that hour—which is a nuisance. I have probably spent six years out of the last ten on this seat, in this corner, and the rest of the time in bed—none of it anywhere else. Occasionally I have a chat with some of the guests.”

“But when you first came to Paris, what did you do, to start with?”

“I took my degree—at the Café de Médicis.”

“And what did you do next?”

“Next? Oh, I crossed the river, and came here!”

“Why did you take that much trouble?”

“Well, you know, a fellow can hardly stay in the Latin Quarter all his life. The students are too noisy. I shall never move again, now. Waiter, a glass of beer!”

I thought he was making game of me, and so persisted:

“Now, look here, tell me the truth! You have had some great sorrow, haven’t you? some unfortunate love-affair perhaps? You certainly look like a man who has been hard hit by fate. Tell me—how old are you?”

“Thirty-three; but I look at least forty-five.”

His wrinkled face, which was none too clean, might indeed almost have belonged to an old man. From the top of his skull fluttered a wisp or two of hair above some skin of a doubtful color. He had enormous eyebrows, a heavy mustache, and a thick, shaggy beard. There appeared to my vision—I can scarcely tell why—a basin full of dark water, in which he had attempted to wash.

“Yes,” said I, “you look older than you are. Surely you must have had some trouble.”

“None in the world, I tell you. I have aged because I never take any exercise. There’s nothing worse for people than this life in cafés.”

Still I could not believe him:

“Ah, then you’ve been a bit gay! One doesn’t get bald like that without running after the women a good deal.”

He tranquilly shook his head, sowing his coat collar with little white particles that fell from his last remaining locks.

“No,” he remarked, “I have always behaved myself.” And raising his eyes to the chandelier overhead, he added, “If I’m bald, the gas is to blame. It’s frightfully bad for the hair. Waiter, a glass of beer!—You don’t seem thirsty?”

“No, thanks. But really, your case is interesting. When did this—er—apathy set in? It isn’t normal; it isn’t natural. There’s something beneath all this.”

The glass that was brought him he gulped down at one swallow. Only, in taking up his pipe again, as his hand trembled, he let it drop, and it broke. This caused him a gesture of despair, and drew from him the complaint:

“Well, now, that’s really a tragedy, that is. It’ll take me a month to color another.”

And through the immense room, now full of tobacco-smoke and beer-drinkers, resounded again his everlasting cry: