Happy International Bacon Day everybody. It’s a relatively new holiday, to be held each year on the Saturday before Labor Day Monday. If you’re a regular Bulletin reader, you already know of my unbridled love of bacon. I already had some for breakfast and am now plotting how to work it into the rest of today’s meals. 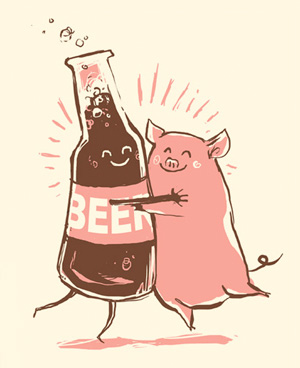 It’s no secret, of course, that beer and bacon work very well together. Rauchbiers and other smoked beers often have bacon aromas. But as far as I’m concerned, bacon pairs nicely with many styles of beer. But what about a bacon beer? 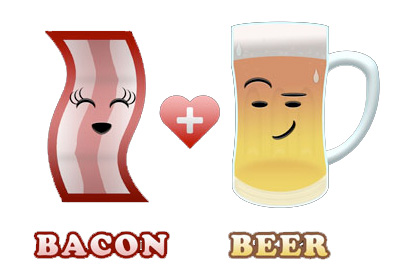 Well, it turns out that at least two breweries are making one. First, Garrett Oliver is making one for the bowling alley, Brooklyn Bowl, that’s across the street from the Brooklyn Brewery.

Using a special malt smoked in the same room as the bacon made by Benton’s Smoky Mountain Country Hams of Tennessee, he’s making a bacon barley wine ale. Picking up the story from the New York Times:

[Brooklyn Brewery] plans to brew about 15 gallons of barleywine with that malt. In the meantime, he’s been infusing a brown ale with the flavor of Benton’s bacon fat through a technique known as “fat washing.” (Nick Fauchald described the process in this profile of the bartender Eben Freeman.) Oh, and the bacon-fat-infused ale was also aged in bourbon barrels, because bourbon and bacon go together like, um, beer and bacon.

Eventually, the barleywine with the bacon-smoked malt and the bourbon-aged, bacon-fat-infused ale would be blended to create one monstrously bizarre beer.

“One of two things will happen,” Mr. Oliver predicted. “Either this will be the most amazingly disgusting thing you’ve ever tasted in your life. Or I shall rule the earth.”

A little closer to home, the Uncommon Brewers down in Santa Cruz are also working on a Bacon Brown Ale. Given their track record of successfully using uncommon ingredients in their beer, I’m actually optimistic that they could pull this off. Bacon is being used these days in all manner of different ways, so it’s only a matter of time before somebody perfects a bacon beer.