You are here: Home / Beers / Hello, Is It Beer You’re Looking For?

First Willie Nelson did ads for Taco Bell to pay his back taxes, and now Lionel Richie is apparently doing the same thing, crooning a version of his hit song “Hello, Is It Me You’re Looking For” to pay the $1.1 million he owes in back taxes to the IRS. The ad itself is pretty funny, a man in searching his refrigerator, presumably looking for a beer, when we here Richie singing his song, and then the man sees him singing through the back of the refrigerator. Cut to the inside of the icebox, and there’s Lionel Richie, dressed in white, sitting a white piano in an all-white room. 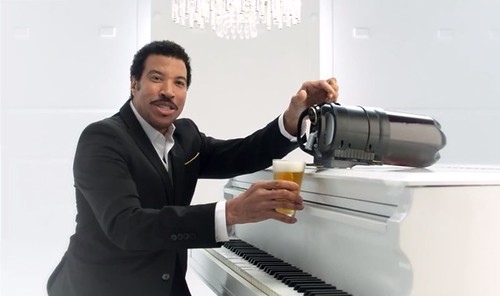 He stops playing long enough to fill a pint glass of beer using the new Tap King dispenser from the Lion Nathan Brewery. Richie reportedly was paid $1.5 million for the ad, which should get him out of hot water with the taxman. The only thing that would have made it better would have been if he’d actually sung “hello, is it beer you’re looking for?”

If the ad won’t play (the embed code has been giving me error messages off and on), try this link here or watch it on AdWeek or Australia’s newspaper The Age.