Today is the birthday of Edward Cecil Guinness a.k.a. Edward Guinness, 1st Earl of Iveagh (November 10, 1847–October 7, 1927). He was one of three sons of Benjamin Guinness, 1st Baronet, and younger brother of Arthur Guinness, 1st Baron Ardilaun. He ran the Guinness brewery beginning in 1868 when his father died. He later became the chairman of the board for life, a position he held until his death in 1927. 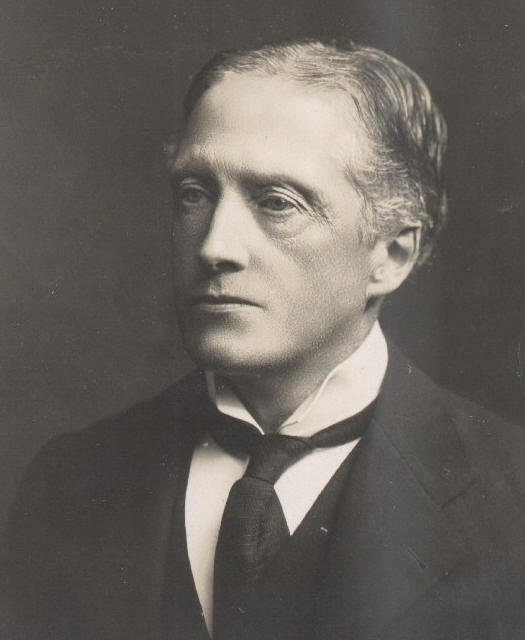 He was born in Clontarf, Dublin,and educated at Trinity College Dublin, graduating with BA in 1870, he served as Sheriff of Dublin in 1876, and nine years later became the city’s High Sheriff. That same year, he was created a baronet of Castleknock, County Dublin, for helping with the visit of the then Prince of Wales to Ireland. In 1891, Guinness was created Baron Iveagh, of Iveagh in County Down. He was appointed a Knight of St Patrick in 1895, and ten years later was advanced in the Peerage of the United Kingdom to Viscount Iveagh. Elected to the Royal Society in 1906, he was two years later elected nineteenth Chancellor of Dublin University in 1908–27, he served as a vice-president of the Royal Dublin Society from 1906–27. In 1910 he was appointed GCVO. In 1919, he was created Earl of Iveagh and Viscount Elveden, of Elveden in the County of Suffolk.

Lord Iveagh was chief executive of the Guinness partnership and company, from his father’s death in 1868 until 1889. He subsequently became the chairman of the board for life, running the largest brewery in the world on 64 acres (26 ha). By the age of 29 he had taken over sole ownership of the Dublin brewery after buying out the half-share of his older brother Lord Ardilaun for £600,000 in 1876.

He then become the richest man in Ireland after floating two-thirds of the company in 1886 on the London Stock Exchange for £6,000,000 before retiring a multi-millionaire at the age of 40. He remained chairman of the new public company Guinness, and was its largest shareholder, retaining about 35% of the stock. The amount can be compared to the 1886 GDP of the UK, which was £116m. 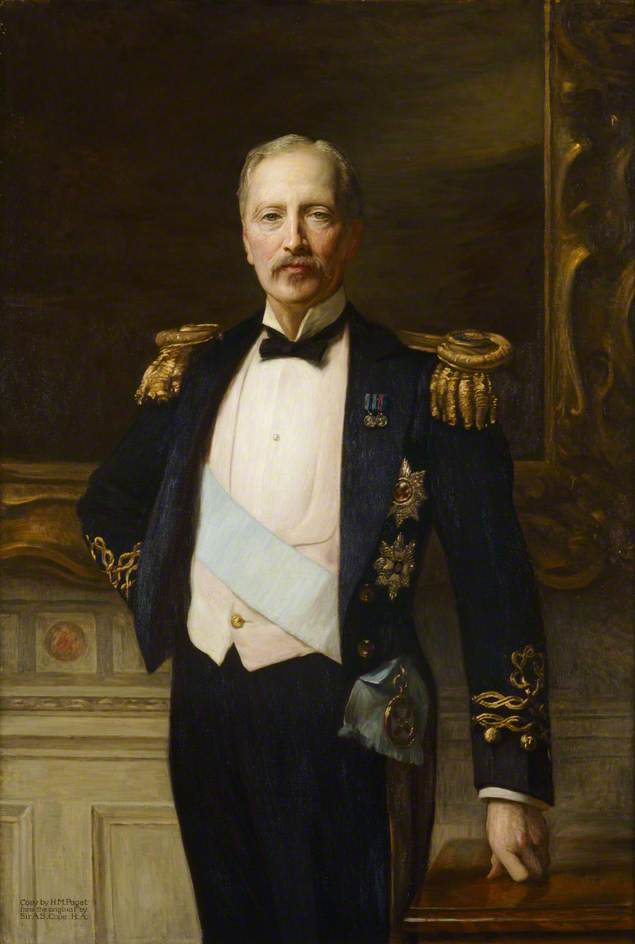 Like his father and brother, Lord Iveagh was a generous philanthropist and contributed almost £1 million to slum clearance and housing projects, among other causes. In London this was the ‘Guinness Trust’, founded in 1890. Most of his aesthetic and philanthropic legacy to Dublin is still intact. The Dublin branch of the Guinness Trust became the Iveagh Trust in 1903, by a private Act of Parliament, which funded the largest area of urban renewal in Edwardian Dublin, and still provides over 10% of the social housing in central Dublin. In 1908 he gave the large back garden of his house at 80 Stephens Green in central Dublin, known as the “Iveagh Gardens”, to the new University College Dublin, which is now a public park. Previously he had bought and cleared some slums on the north side of St Patrick’s Cathedral and in 1901 he created the public gardens known as “St. Patrick’s Park”. In nearby Francis Street he built the Iveagh Market to enable street traders to sell produce out of the rain.

Iveagh also donated £250,000 to the Lister Institute in 1898, the first medical research charity in the United Kingdom (to be modelled on the Pasteur Institute, studying infectious diseases). In 1908, he co-funded the Radium Institute in London. He also sponsored new physics and botany buildings at Dublin University in 1903, and part-funded the students’ residence at Trinity Hall, Dartry, in 1908.

Iveagh helped finance the British Antarctic Expedition (1907–09) and Mount Iveagh, a mountain in the Supporters Range in Antarctica, is named for him.

Interested in fine art all his life, from the 1870s Edward Cecil amassed a distinguished collection of Old Master paintings, antique furniture and historic textiles. In the late 1880s he was a client of Joe Duveen buying screens and furniture; Duveen realised that he was spending much more on fine art at Agnews, and refocused his own business on art sales. He later recalled Edward Cecil as a: “stocky gentleman with a marked Irish brogue”.

While he was furnishing his London home at Hyde Park Corner, after he had retired, he began building his art collection in earnest. Much of his collection of paintings was donated to the nation after his death in 1927 and is housed at the Iveagh Bequest at Kenwood, Hampstead, north London. While this lays claim to much of his collection of paintings, it is Farmleigh that best displays his taste in architecture as well as his tastes in antique furniture and textiles. Iveagh was also a patron of, then current artists such as the English school portrait painter Henry Keyworth Raine. 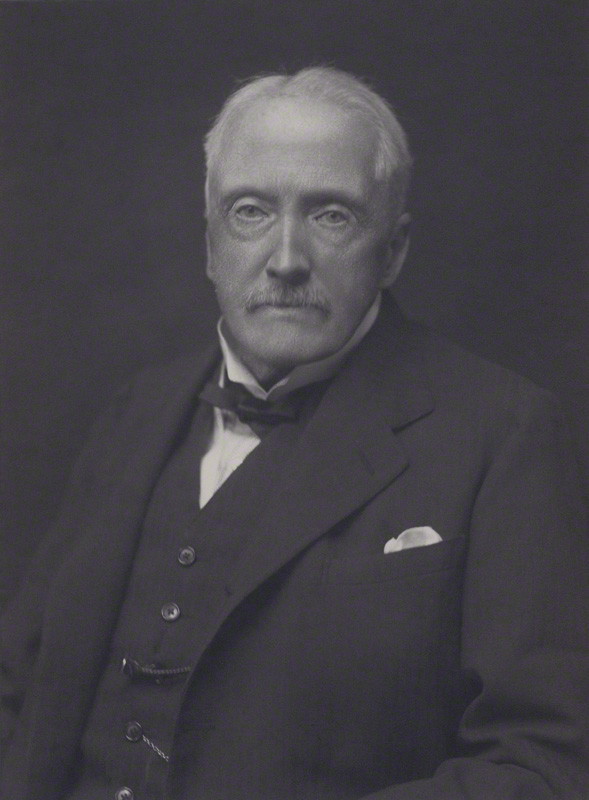 Portrait of Guinness, by Walter Stoneman, 1926.

Guinness, Edward Cecil, first Earl of Iveagh 1847-1927, philanthropist, was born at St. Anne’s, Clontarf, county Dublin, 10 November 1847, the youngest of the three sons of Sir Benjamin Lee Guinness [qv.], brewer, of Dublin, by his wife, Elizabeth, third daughter of Edward Guinness, of Dublin. His eldest brother, Arthur, was raised to the peerage as Baron Ardilaun in 1880. Edward Cecil Guinness was not sent to any public school, but was prepared by a tutor for entrance to Trinity College, Dublin, where he took his degree in 1870. His father died in 1868, leaving him a share in the Guinness brewery at St. James’s Gate, Dublin. The brewery had been bought by his great-grandfather, Arthur Guinness, in 1759 from Mark Rainsford, and in 1855 Sir Benjamin Guinness had become the sole proprietor. A large export trade was developed, and the business became famous all over the world. After leaving the university Edward Guinness took up his part in the management of this great concern, and showed administrative and financial ability of a very high order. He also interested himself in public affairs, and from early manhood was a prominent figure in Dublin municipal life. He was high sheriff of the city in 1876, and of the county in 1885.

In 1886 the Guinness brewery was incorporated as Arthur Guinness, Son, & Co., Ltd. When the public company was formed the capital required by the vendors was subscribed many times over. Indeed the applications received amounted to more than a hundred million pounds, so anxious was the public to acquire shares. Edward Guinness became chairman.

Three years later Guinness retired from active management of the company, though he retained the chairmanship. In November of that year (1889), in order to mark his retirement, he placed in trust the sum of £250,000, to be expended in the erection of dwellings which could be let at such rents as would place them within reach of the poorest of the labouring population. £200,000 was to be spent in London, and the remainder in Dublin. Guinness followed up this gift by presenting another quarter of a million pounds to Dublin for the purpose of pulling down slum property in the Bull Alley district. As a result seven acres which had been covered with squalid dwellings were cleared. This was one of the greatest benefits that Guinness ever conferred upon his native city. Among later instances of his munificence was a contribution of £250,000 to the Lister Institute of Preventive Medicine in London for the endowment of bacteriological research.
In 1885 Guinness was created a baronet, and in 1891 he was raised to the peerage of the United Kingdom as Baron Iveagh, of Iveagh, county Down. During the South African War he equipped and maintained an Irish field hospital. In 1903, when King Edward VII and Queen Alexandra visited Ireland for the first time after their coronation, Lord Iveagh gave £5,000 to the Dublin hospitals, and he repeated this act of liberality on the occasion of the visit of King George V and Queen Mary in 1911.

In 1905 Lord Iveagh was raised to a viscounty. By this time he lived chiefly in England, where he had bought Elveden Hall, in Suffolk, a well-known sporting estate. Here he entertained both King Edward and King George for pheasant and partridge shooting. But his interest in Ireland did not diminish. The Iveagh markets, which were opened in Dublin in 1907, were due chiefly to his generosity. In 1908 he was elected chancellor of Dublin University in succession to the fourth Earl of Rosse—an appropriate honour, for his services to his old university had been both liberal and judicious. In September 1909 he received a striking compliment, when the nationalist corporation of the city of Dublin presented him with an address of thanks for his many and lavish gifts to Dublin, gifts which, in the words of the address, constitute the noblest monuments of your generosity and civic patriotism. About the same time there was a movement among the nationalists to offer him, notwithstanding his strong and openly expressed unionist views, the lord mayoralty of Dublin; but, with a tact which was characteristic and which left behind no ill feeling, he declined to allow his name to be put forward.

The disturbances in Ireland during and immediately after the European War caused much distress to Lord Iveagh. He took no active part in the settlement of 1922, but he maintained his connexion with the Irish Free State, and continued his many charities under the new régime. In 1919 he was advanced to the dignity of an earldom, becoming Earl of Iveagh and Viscount Elveden. In March 1925, when the Ken Wood preservation committee had come to the end of its resources, he purchased the remainder of the Ken Wood estate to the north of Hampstead Heath, about seventy-six acres, and arranged that this area should become public property in ten years’ time, or at his death should it occur before that term. The estate was thus saved from being sold for building purposes.

Iveagh was a man of quiet and unassuming manner, impressing all who came into contact with him by his courtesy and genuine kindness no less than by his high sense of public duty and undoubted ability. He certainly took the utmost care that his great benefactions should be used to the best advantage of those whom they were intended to benefit. In addition to his other honours he was created a knight of St. Patrick in 1896 and received the G.C.V.O. in 1910. He was elected F.R.S. in 1906 and was granted honorary doctorates by the universities of Dublin and Aberdeen. He married in 1873 his cousin Adelaide Maud (died 1916), daughter of Richard Samuel Guinness, M.P., of Deepwell, co. Dublin, and had three sons. He died at his London house in Grosvenor Place, 7 October 1927, and was succeeded as second earl by his eldest son, Rupert Edward Cecil Lee (born 1874).

Lord Iveagh’s estate at his death was valued provisionally at £11,000,000. He bequeathed to the nation a valuable collection of pictures, including twenty-four examples by Reynolds and Romney. It was his intention that these should form the nucleus of an art gallery at the house at Ken Wood which he endowed with the sum of £5,000 for this purpose. 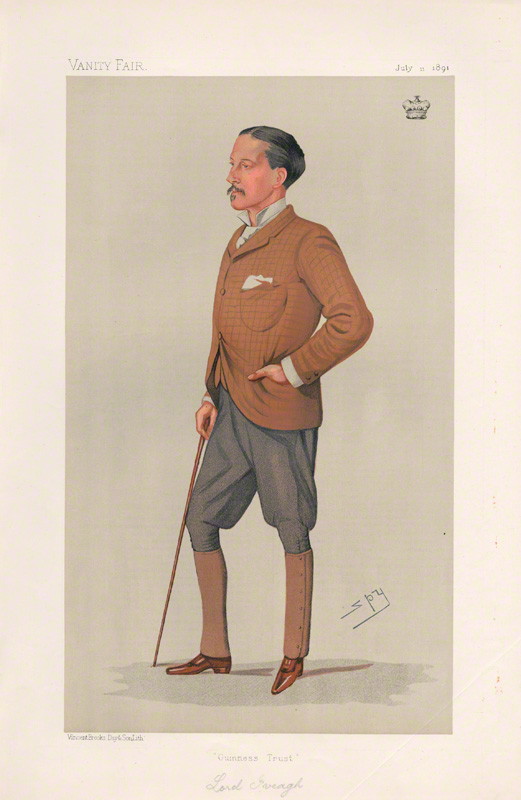