Today is the birthday of Emanuel Bernheimer (August 3, 1817-March 26, 1890). He was born in Baden-Württemberg, Germany, and apprenticed as a brewer in Germany, coming to New York City when he was 27, in 1844. With a partner, August Schmid, in 1850, he founded the Constanz Brewery on East 4th Street near Avenue B, and a couple of years later, with a different partner, James Speyers, he started the Lion Brewery on Columbus Ave, between 107th and 108th Streets in Manhattan, next door to the beer garden at the Lion Park, and indeed it is sometimes referred to as the Lion Park Brewery. The business was reorganized in 1868, and his old business partner August Schmid also became a partner in the Lion Brewery, and by 1890 its official name was the Bernheimer & Schmid Brewery, though they continued to trade under the Lion Brewery name. In 1895, it was the sixth-largest brewery in the U.S. After 1903, it was called the Lion Brewery of New York, presumably to avoid confusion with the many other breweries with Lion in their name. Lion survived prohibition but closed for good in 1942.

Here’s a biography of Bernheimer from Find-a-Grave, originally from the New York Times, for March 29, 1890:

Emanuel Bernheimer, one of the owners of the Lion Brewery and one of the oldest brewers in this part of the country, died at his home, 351 West Fifty-fifth street, on Thursday, from complaints incident to his advanced age. He had not been in good health for several years, and for some months was unable, save rarely, to leave his house. The funeral will be held at his home to-morrow at 9:30 A.M., the Rev. Dr. Gottheil officiating. The burial will be in the Salem Field Cemetery, the Rev. Dr. Silverman leading the services at the grave. Mr. Bernheimer was born in Germany in 1817, and served an apprenticeship of some years in a brewery in his native country before he came to this city in 1844. When he arrived here it was with some capital, and he engaged in the general importing business in Beaver-street. In 1850 he formed a partnership with August Schmid, and, recognizing the possibilities of brewing in this city, established the Constanz Brewery in East Fourth-street. This was one of the first breweries started here, and it was successful beyond the hopes of the partners. Hundred and Eighth-street, which, with its additions of a big garden and a park for picnics, soon became quite famous, parties being made up in all parts of the city to take the then long trip to Lion Park for an evening’s enjoyment. Mr. Bernheimer began the extensive and elaborate system of advertising which is now a characteristic of the trade, and was the first to establish beer saloons of his own in various parts of the city, gradually disposing of them to their lessees, much the same as is done at present. Under the firm name of Speyer & Bernheimer he continued the business for several years. About 1868 the firm was reorganized by the admission of August Schmid, and a year or so later it was changed into Schmid & Bernheimer by the admission of Joseph Schmid. In 1878 Mr. Bernheimer retired from active participation in the brewery business, his son, S. E. Bernheimer, succeeding him. The business was carried on under the name of Schmid & Bernheimer until Mr. August Schmid died in July, 1889. Then the firm was composed of Mr. Bernheimer’s three sons, S. E., Max E., and Henry Bernheimer. During the civil war Mr. Bernheimer was a liberal contributor to the various funds which were then established. He was a Democrat throughout his life, following his party in national affairs. In local politics he was disposed to be independent. He was one of the oldest members of the Temple Emanu-El, was an active participant in the work of the German Widows and Orphans’ Society, a patron of the Mount Sinai Hospital, the Hebrew Orphan Asylum, the German Hospital, and the Montefiore Home for Chronic Invalids. Besides his sons, he leaves one daughter. His wife died four years ago to-day. 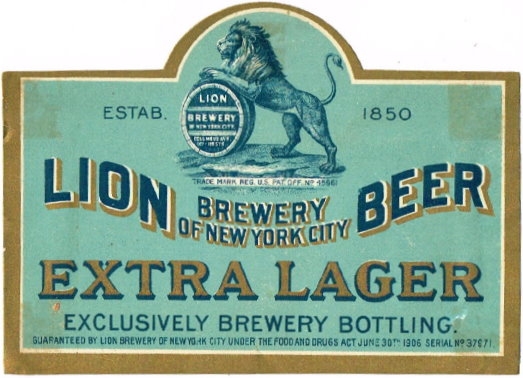 And this account of Bernheimer is from the West Side Rag:

Emanuel Bernheimer was born in Germany in 1817 and served an apprenticeship there before coming to New York in 1844. He arrived “with some capital” and set up an importing business on Beaver Street. In 1850, he became a partner of August Schmid in the Constanz Brewery which is described as “successful beyond the hopes of the partners.” In all, at its height, the firm of Bernheimer and Schmid owned and operated five breweries, including the Lion, on Staten Island and in Manhattan. 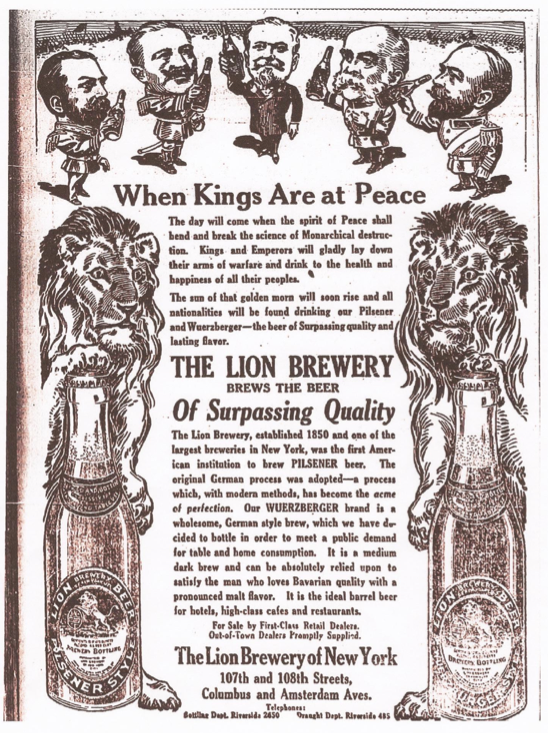 Bernheimer’s genius seems to have been advertising. He began an elaborate system of marketing which was quickly adopted by his fellow brewers and he established “beer saloons of his own in various parts of the city, gradually disposing of them to their lessees,” not unlike the franchise system of today. The advertisement shown [here] is a perfect example of business savvy combined with some of the higher ideals of the day: “Kings and Emperors will gladly lay down their arms of warfare and drink to the health and happiness of all their peoples. The sun of that golden morn will soon rise and all nationalities will be found drinking our Pilsener and Wuerzberger – the beer of Surpassing quality and lasting flavor.” An image of 19th century paradise accompanied by a glass of Lion Brewery beer. Perfect. 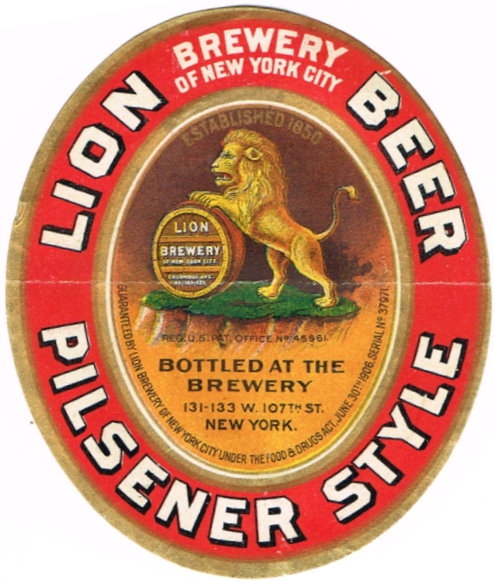 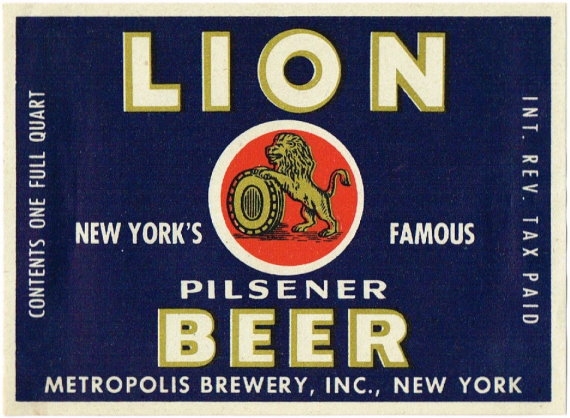 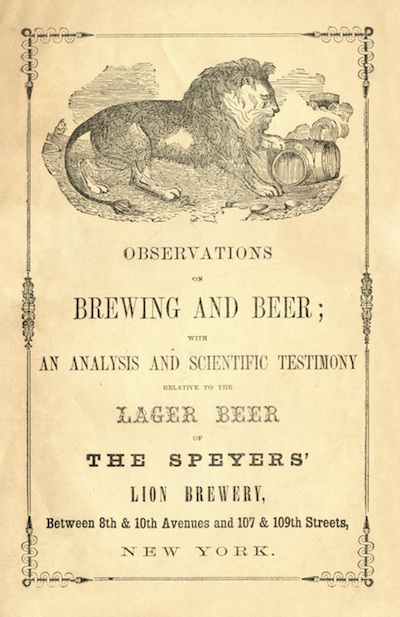 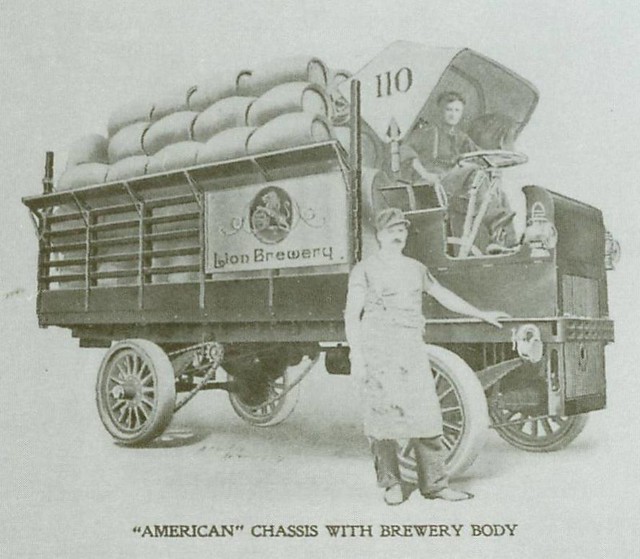 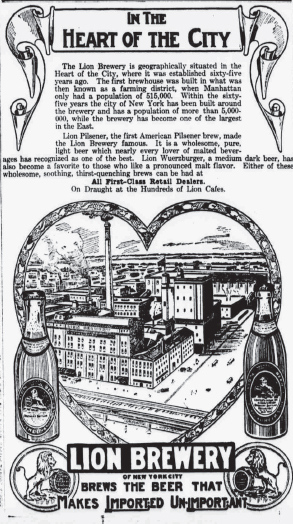