Today is the birthday of Eugene O’Keefe (December 10, 1827-October 1, 1913). He “was a Canadian businessman and philanthropist, well-known in the brewing industry for his signature brews. He founded the O’Keefe Brewery Company of Toronto Limited in 1891.” 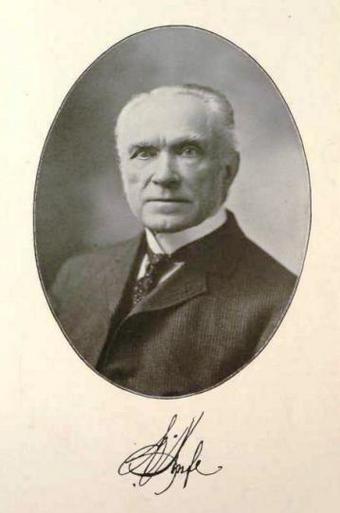 Born in Bandon, County Cork, he moved with his family to Canada when he was five eventually settling in Toronto. He married Helen Charlotte Bailey in 1862. They had a son and two daughters.

From 1856 to 1861, he worked at the Toronto Savings Bank. He later was president of the Home Bank of Canada. In 1861, he was one of the purchasers of Toronto’s Victoria Brewery (founded by George Hart and Charles Hannath c.1840s as Hannath & Hart Brewery[1]), at the corner of Victoria and Gould Streets, with had an annual production of 1,000 barrels. In 1891, he incorporated it as O’Keefe Brewery Company of Toronto Limited. The brewery would expand to a capacity of 500,000 barrels. He sold the business after his son died in 1911. The company would later be part of Carling O’Keefe Breweries.

In 1909, Pope Pius X made him the first Canadian layman to be made a private Papal chamberlain. He died at his home on Bond Street in 1913, aged 85.

The O’Keefe name is well established in Toronto due to the many charitable donations Eugene O’Keefe made throughout his life. He donated millions of dollars to the Catholic Church in Toronto; built five churches in Toronto; built the St. Augustine’s Seminary in Scarborough; and built Toronto’s first low-income housing development. The O’Keefe name was used as a tribute on the new O’Keefe Centre when it was built in 1960 by E. P. Taylor, then the head of O’Keefe Brewing Company. In 1996, the name was changed to the Hummingbird Centre. In 2007 the name was changed to the Sony Centre for the Performing Arts. His former mansion (O’Keefe House), located across from the former O’Keefe Brewery serves as a residence for students at Ryerson University and the brewery itself is now the Image Arts faculty building.

Since then, a handful of individuals have been actively trying to reestablish the O’Keefe name due to the vital role the man played in shaping the city during the Victorian period. It was not until 2006, when the official biography was written on O’Keefe; the delay due in large part to scant information and lack of personal and company records. 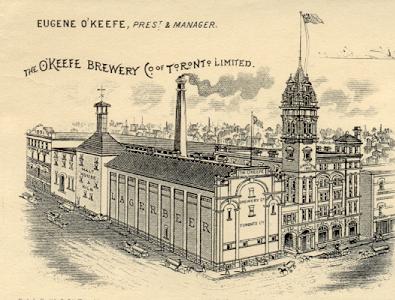 And this biography of O’Keefe is from the Canadian Encyclopedia:

Eugene O’Keefe, brewer, banker, philanthropist (born 10 December 1827 in Bandon, Ireland; died 1 October 1913 in Toronto, ON). O’Keefe is best known for founding the O’Keefe Brewery Company of Toronto Limited. A successful Catholic businessman and philanthropist, he was the first Canadian layman to be made a private chamberlain to the pope.

Eugene O’Keefe (born Keeffe) came to Canada in 1832, when he was five years old. The family appears to have changed its name to O’Keefe after immigrating to Canada. O’Keefe was educated in Toronto schools. In 1856, he began working at the Toronto Savings Bank, which had been established two years earlier by Bishop Charbonnel and members of the Society of Saint Vincent de Paul. O’Keefe worked at the bank until 1861, but maintained ties with the institution, serving as board member, director, vice-president and eventually president (1901) of what would become the Home Bank of Canada. 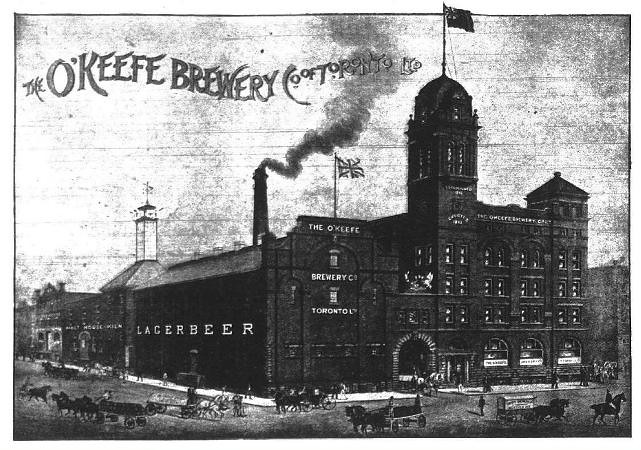 In 1861, O’Keefe partnered with two other men to buy Toronto’s Victoria Brewery (owned by Charles Hannath and George Hart). At the time, the brewery produced about 1,000 barrels of ale and stout per year. By the 1890s, O’Keefe was one of the largest brewers of lager beer in Canada, and had implemented new technologies including refrigeration, plant electrification, crown-cap bottles and motorized delivery vehicles. The company was incorporated as the O’Keefe Brewery Company of Toronto Limited in 1891. Devastated by the death of his son in 1911, O’Keefe sold his brewery shares to his partner, Widmer Hawke, and to Sir Henry Pellatt. By that time, the brewery could produce 500,000 barrels a year. After Hawke’s death, the brewery was sold to a holding company, O’Keefe Limited, under Pellat, Sir William Mulock and Charles Vance Millar. This company was bought by E. P. Taylor in 1934 and incorporated into his Brewing Corporation of Canada Limited (later Canadian Breweries Limited).

O’Keefe donated much of his wealth to charity, particularly the Catholic Church. He financed several new churches in Toronto, including St. Monica’s Church and St. Stanislaus Kostka Church, and donated $400,000 to build St. Augustine’s Seminary in Scarborough. In 1909, he was recognized for his benefactions to the Roman Catholic Church when he became the first Canadian layman to be appointed private chamberlain to the pope. 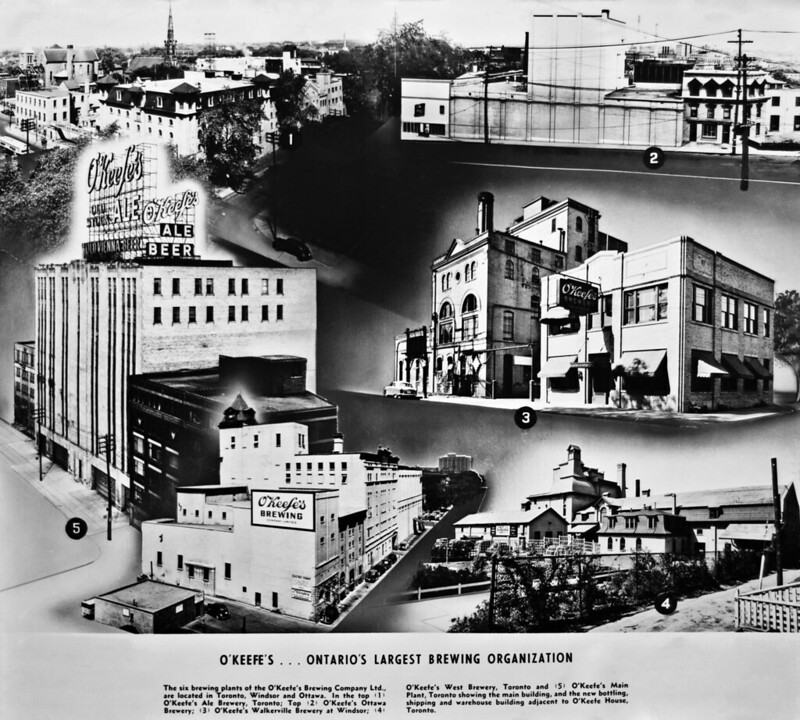 And this is from the Dictionary of Canadian Biography:

Little is known of Eugene O’Keefe’s early life. His family came to the Canadas when he was five; two years later they settled in Toronto. It seems the family adopted the O’Keefe spelling when they immigrated. John O’Keefe was possibly the tavern proprietor and, later, the sailor listed in Toronto directories. Eugene was educated at the private school run by Denis Heffernan and at “the regular church schools.” In his youth he acquired a reputation as an expert bowler, oarsman, and horseman. Apparently he was an ensign in the local volunteer rifle company. Its captain, Denis K. Feehan, was a close friend, and the two men had much in common. They were Irish Catholics in a distinctly Protestant city and members of the Society of St Vincent de Paul, the principal conduit for Catholic charity in Toronto.

O’Keefe’s brother-in-law, John Murphy, operated a hotel and when he died O’Keefe helped his sister run it. He reputedly spent some time too in the grocery business. In 1856 he became a clerk at the Toronto Savings Bank, established two years before by Bishop Armand-François-Marie de Charbonnel* and members of the Society of St Vincent de Paul. Perhaps Feehan, who had promoted the bank, played a role in O’Keefe’s appointment. O’Keefe worked for the bank until 1861, acquiring in the process a thorough knowledge of business practices, particularly accounting. His association with it did not end then, however. A director before and after its reorganization in 1872, he stayed on the board after the assets of the bank were taken over in 1879 by the Home Savings and Loan Company Limited. Later the same year Archbishop John Joseph Lynch* sold this company to Frank Smith*, a wealthy Catholic politician who made himself president and O’Keefe vice-president. O’ Keefe succeeded Smith in 1901 and oversaw another name change, to the Home Bank of Canada, which enjoyed its most prosperous years under his leadership.

In 1861 O’Keefe had made a business decision that was to have a profound effect not only on his own fortunes, which were far from secure at the time, but also on the welfare of the archdiocese. When the Victoria Brewery, at the corner of Victoria and Gould streets, came up for sale, he formed a partnership with George Macaulay Hawke and a brewer, Patrick Cosgrave, to purchase this small but reputable operation. Its annual production was 1,000 barrels of traditional English ales and stout. Within a year Cosgrave left, but O’Keefe and Hawke continued in association as O’Keefe and Company. When their partnership ended in 1882, O’ Keefe joined with Hawke’s son, Widmer, and Joseph Hooper Mead; the following year the firm was narrowed down to O’Keefe and Widmer Hawke. In 1891 they had it incorporated as O’Keefe Brewery Company of Toronto Limited.

On entering the business O’Keefe had known nothing about brewing, but, according to one biographer, “his business training had shown him that here was an industry with unlimited capacity for expansion.” Before long he had increased productivity to 7,000 barrels a year. Ambitious and forward-looking, O’Keefe supervised additions to the plant in 1872, 1882, and 1889. Shortly after incorporation the entire brewery was replaced by a modern facility equipped with a 60,000-bushel malt-house. This plant lasted until 1911, when a brewery with a capacity of 500,000 barrels was built. 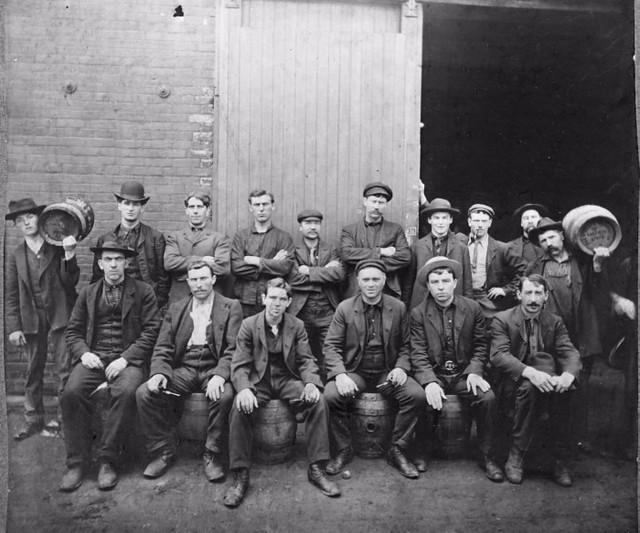 Brewing in 19th-century Ontario was a highly conservative and tradition-bound business. The source of O’Keefe’s rapid success was his willingness to be innovative and aggressive at every level of production and distribution. In 1879 he had introduced the large-scale production of lager; in 1898 he was the first brewer in Canada to install a mechanically refrigerated storehouse; and later he began using motorized vehicles. As early as the 1880s he was outselling his competition everywhere in Ontario. Recognized within the industry, he served as a president of the Ontario Brewers’ and Maltsters’ Association.

The premature death in 1911 of his only son, Eugene Bailey, effectively ended O’Keefe’s interest in his brewery’s long-term future. He sold his shares to Hawke and Sir Henry Mill Pellatt*. The sizeable proceeds were applied to O’Keefe’s favourite charities, such as Peter’s pence, St Michael’s Hospital, and the repair of the rectory of St Michael’s Cathedral, of which he was a member. O’Keefe, who rarely did anything on a small scale, had already set out to erect new Catholic churches. For example, in 1907 he built St Monica’s Church on Broadway Avenue as a memorial to his wife. Four years later he purchased West Presbyterian Church on Denison Avenue and turned it over to immigrant Poles, who renamed it St Stanislaus Kostka Church. In each case he spent $30,000. His most impressive and lasting legacy is St Augustine’s Seminary on the Scarborough Bluffs, which opened in August 1913. O’Keefe gave the colossal sum of $400,000 towards its construction. Even in death he was generous. His will, which confirmed his status as the Catholic Church’s greatest benefactor in Toronto, directed the distribution of additional sums to church and civic charities, out of an estate worth $968,300; eventually $184,776 was given out.

Eugene O’Keefe was a Conservative in politics and a moderate nationalist in Irish affairs. He went to Ottawa in 1887 in an unsuccessful bid to stop William O’Brien, a fiery Home Ruler, from appearing in Toronto at the same time as Governor General Lord Lansdowne [Petty-Fitzmaurice*]. One of Toronto’s richest men, O’Keefe carried more weight in the field of philanthropy. He exercised considerable influence over the work of the Society of St Vincent de Paul, the Catholic League, and the local branch of the United Irish League, and he was a trustee from 1906 of the Toronto General Hospital. As well, he was an original director of the Catholic Church Extension Society, and he sat on numerous parish committees at the cathedral. For his munificence and dedication to the church, he was the first Canadian layman to be made a private chamberlain to the pope, on 9 Jan. 1909.

O’Keefe died on 1 Oct. 1913 at his home, which he had built in the 1880s on Bond Street, across from his brewery. He was survived by one daughter, Helena Charlotte French. Three thousand people, including hundreds of brewery workers, attended his Requiem. 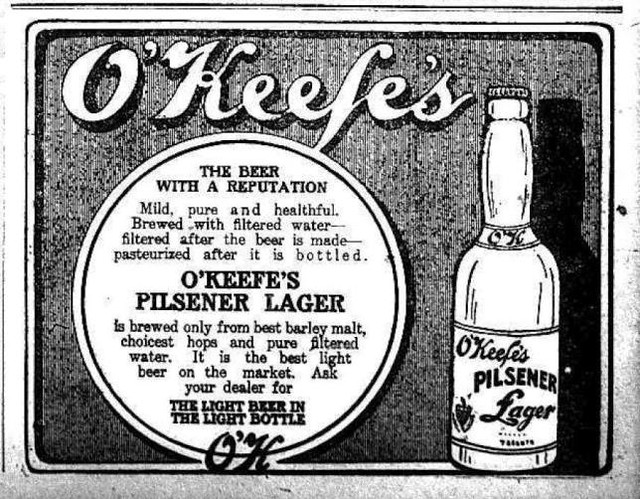 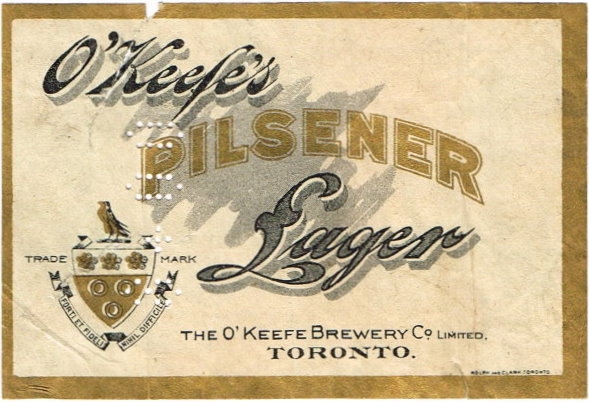