Today is the birthday of George Ehret (April 6, 1835-January 21, 1927). He was born in Hofweier, Buden, Germany but followed his father to America, arriving in New York in 1857, age 31. Having been trained as a brewer, he worked for a few years and then founded his own brewery, the George Ehret Brewery, which was also known as the Hell Gate Brewery, in 1866. It stopped producing beer in 1920 due to prohibition and limped along until 1927, when it closed due to his death. 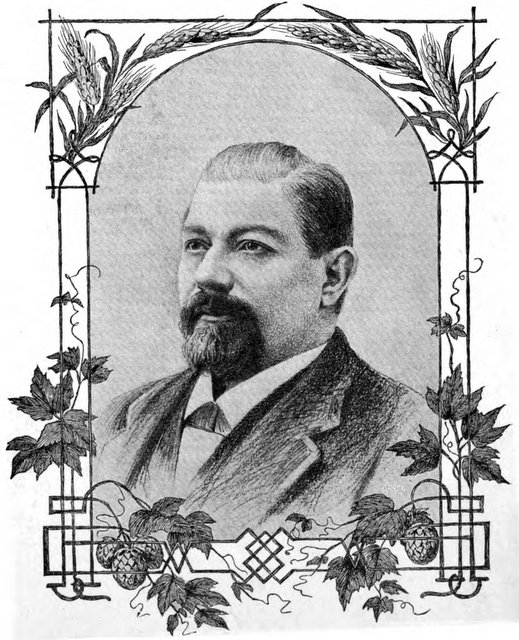 100 Years of Brewing has a much fuller account of Ehret and the Hell Gate Brewery:

The Hell Gate Brewery was established by George Ehret in the year 1866; hence, at a time when the annual production of malt liquors [in the U.S.] had increased to 5,115,140 barrels. He had then just attained the age of thirty-one years, the date of his birth being April 6, 1835. Nine years before the establishment of this brewery, Mr. Ehret came to America (1857) to join his father, who had emigrated from Germany in August, 1852.

Mr. Ehret, being a thoroughly practical brewer, strictly devoted to his calling, had not long to serve in the brewery of A. Hupfel before he rose to the foremanship and gained the full confidence and friendship of his employer. When he made known his intention to start a brewery for himself, Mr. Hupfel, a man of generous instincts and philanthropic disposition, at once promised and, at the proper time, gave his support and assistance to the new enterprise. 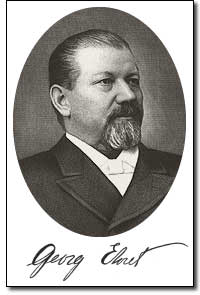 The site selected by Mr. George Ehret for his brewery was at that time of a decidedly rural character. It was opposite a dangerous passage in the East river, which had been designated “Hell Gate.” From this fact Mr. Ehret decided to name his brewery “The Hell Gate Brewery.”

The building in which he began brewing was erected under his supervision on the lower part of the block, between Ninety-second and Ninety-third streets and Second and Third avenues, and its interior appointments were completed at the beginning of the year 1867. This building is no longer standing. It was succeeded by another in 1871, which formed the nucleus of the establishment that now covers the greater part of an entire block. It is at present almost hidden by the over-towering brewery buildings which have sprung up around it in the course of a quarter century, and a full view of it can only be gained from the quadrangular yard, of which it forms the interior side, the buildings flanking it being the offices and the storehouse, both fronting on Ninety-second street. 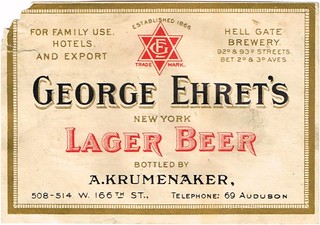 Mr. George Ehret, from the very beginning, aimed at the brewing of a beer as nearly like the best quality of Munich lager as the difference between our water and that of the river Isar would admit. How well he succeeded in this may be inferred from the popularity which his beer attained in a few years. As has been said, he began brewing immediately after the completion of his plant. At the beginning of January, 1867, the first brew was stored in the cellars; in March of the same year his wagons, freighted not only with kegs, but also, metaphorically speaking, with all his expectations and anxieties, left his yards for the first time to serve his new customers. Five years after that date he sold 33,512 barrels; seven years later, 74,497 barrels, and in 1874 he produced and sold 101,050 barrels — a quantity which twenty-eight years ago was manufactured by but very few of the largest establishments. This growth was then all the more remarkable, because Mr. Ehret’s operations had suddenly been checked for a considerable time on account of a fire which, on the 19th of September, 1870, destroyed the greater part of his brewery, including books and papers. It is owing to this fact that we are unable to give the quantities of beer brewed during the four years preceding the fire. 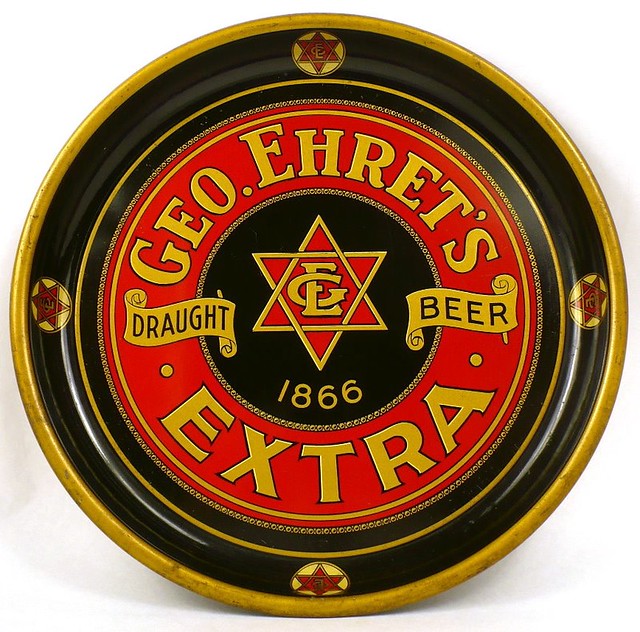 The year 1870 may be called the second starting point in the growth of Hell Gate Brewery. In a certain sense the fire was not an unmixed evil, especially in view of the fact that the demand for Ehret beer was fast outgrowing the capacity of the original plant, necessitating a considerable extension of the premises and buildings, and many additions to the machinery and other appointments.

This immense production has been attained without any forced efforts to open new channels outside of the limits of the State of New York; although, naturally enough, whenever a demand was shown to exist in outside markets, Mr. George Ehret endeavored to supply it, and thus established a number of agencies. The home demand always proved so great that the idea of engaging in an extensive export trade beyond the sea could not be entertained, save in conjunction with plans for a further enlargement of the brewery premises and increase in equipment.

On approaching the brewery, one is impressed at the very first glance with the unusually large dimensions of the grounds upon which the buildings are erected. In a smaller city this would not be anything worthy of note, but in New York, and especially in that part of it to which we refer, where scantness of territory and an immense and ever-growing population render necessary the utmost economy in the utilization of space (much to the detriment of architectural beauty), such extended premises as those we speak of can not fail to make an impression. The grounds, extending from within a short distance of Third avenue to Second avenue, and from Ninety-first to Ninety-fourth streets, comprise, inclusive of stables and storage buildings on Second avenue between Ninety-first and Ninety-third streets, seventy-five city lots, or one hundred and eighty-seven thousand five hundred square feet.

The main building, an imposing structure, surmounted by a graceful clock tower, fronts on Ninety-third street, extending southward to a considerable depth; it is flanked on either side by lower wings, which, in point of architecture and symmetrical proportions, harmonize perfectly with the principal facade. Ornamental gables, rising from the cornices of every building, enhance the impression of uniformity which, next to utility, was manifestly one of the prime objects of the architect. 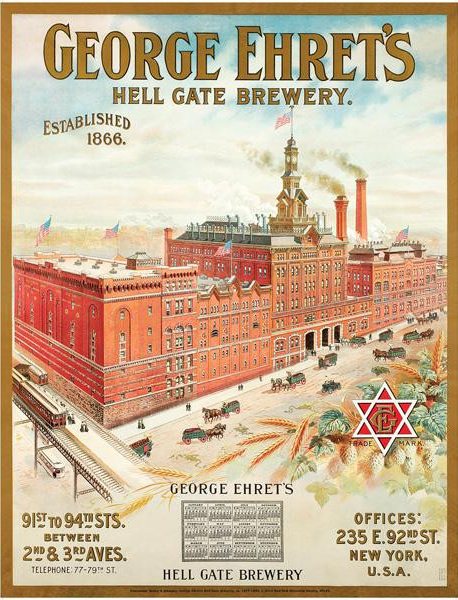 100 Years of Brewing was published in 1903, so the rest of the story can be found in Will Anderson’s Breweries of Brooklyn:

George Ehret, once this nation’s largest brewer, passed away in January of 1927 (leaving an estate valued at $40,000,000!). It was beginning to look as if Prohibition would last forever and the executors of Ehret’s estate debated whether they should sell the mammoth brewery buildings on the upper east side of Manhattan. For years they held off but in April of 1935 Col. Jacob Ruppert, Ehret’s neighbor on Third Avenue and 92nd Street, made an offer that the Ehret family just couldn’t refuse. With the sale to Ruppert, the Ehrets had even more money to add to what they’d inherited earlier — but they had no brewery. This problem was solved very nicely by the cash purchase, in July of 1935, of the Interboro Beverage Co. facilities [in Brooklyn]. Although the location was new, the brewery was still very much under the control of the Ehret family. Louis J. Ehret, George’s son, headed the firm, and he was aided by two of George’s grandchildren, George Ehret Burghardt and William Ehret Ottmann. Richard Barthel, brewmaster at the old Ehret plant in Yorkville, also made the move to Brooklyn. Over $200,000 was spent to thoroughly recondition the plant throughout, and by the summer of 1936 Louis J. Ehret had the plant in full production.

Ehret’s Extra Beer and Ale were brewed in Brooklyn for the next 12 years, until 1948, when the company transferred its operations to Union City, New Jersey. Whether Ehret’s moved because of an irresistible offer from Schlitz [who bought the Brooklyn plant] or because the Union City plant seemed preferable is unknown. In any case, move to New Jersey they did, where they remained in operation but three more years. 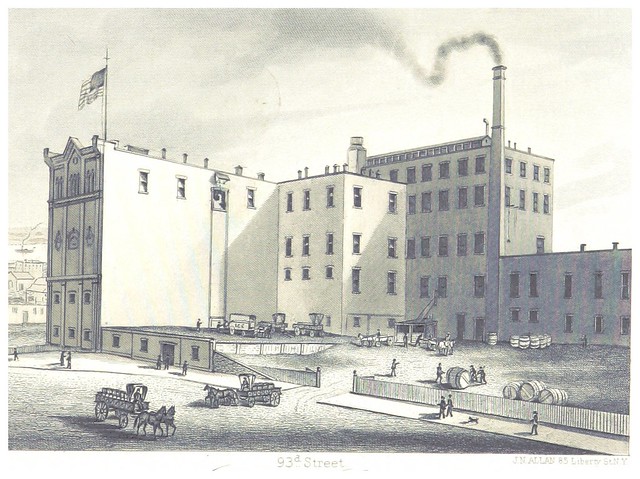 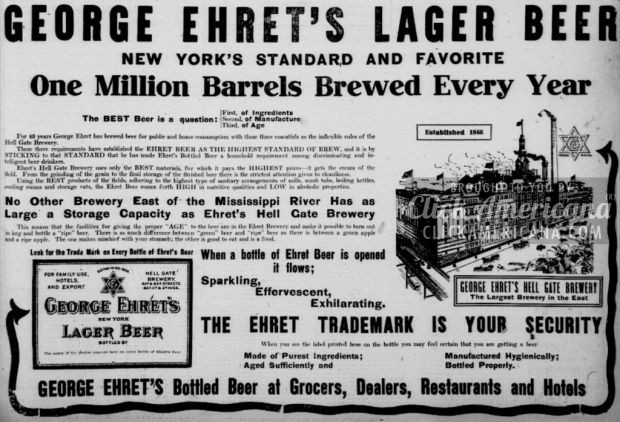