Today is the birthday of George Hauck (January 31, 1832-April 20, 1912). He was born in Germany, but came to America when he was 18, in 1850, and after working in several breweries, in 1863. settled in Kingston, New York. In 1864, he and a partner, George Dressell, founded a brewery, initially known as the Geo. Dressell & Co. Brewery. Twenty years later, Dressell passed away, and Hauck became the sole proprietor, changing the name to the George Hauck Brewery. In 190s, his sons joined him in the business, and it became known as the Geo. Hauck & Sons Brewing Co., before it closed due to prohibition in 1916. It was re-opened by a few different business entities after repeal in 1933, but none proved sustainable and it closed for good in 1938. 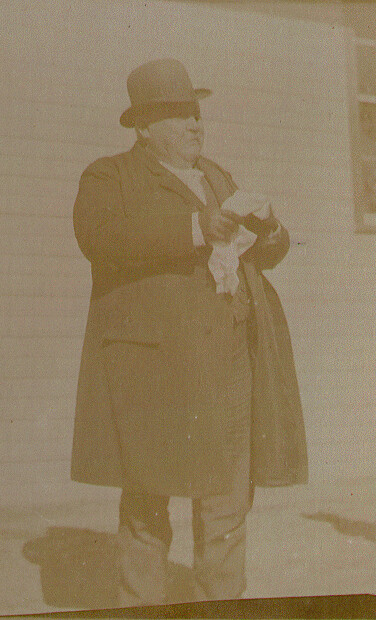 In “The History of Ulster County, New York,” there’s an entry on Hauck: 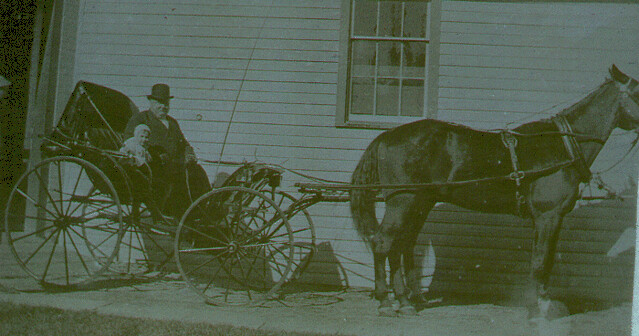 George Hauck and a young child in a horse and buggy, around 1900.

George Hauck, president of the George Haurk and Sons Brewing Company, died on Saturday evening at his home on Wurts street, aged 80 years. He had been in failing health for some time. Mr. Hauck was born in Germany In 1832, a son of Adam Hauck. His father was a brewer by occupation. Coming to this country in 1849 be became associated with hib father In the latter’s brewery at the corner of Broome and Wooster streets in New York. Two years later they moved to Sheriff street where the brewery was continued. The son went to Cincinnati in 1852 and made a study of brewing. Four years later he returned to New York and entered the employ of Kress & Schaffer. He next went with the Lyon brewery and remained until it was destroyed by fire. From that time until 1861 Mr. Hauck entered the. employ of William Bertsche, who had a brewery where the Hoffman brewery now stands at Hone and Spring streets. Three years later Mr. Hauck and George Dressel formed a partnership and began brewing on the site of the present brewery at the corner of Wurts and McEntee streets. From the death of Mr. Dressel in 1884 until 1890 Mr. Hauck continued the business alone. The company was incorporated in that year. In 1867 Mr. Hauck married Miss Barbara Welker of Worms, Germany. Five children were born to then: John Hauck, Adam Hauck, Minnie Hauck, wife of Prof. C. W. Louis Stiehl of Oklahoma City; Louise Hauck, wife of John B. Kearney Mr. Hauck was a member of United German Lodge, No. 303. I. O. O. F., Franklin Lodge, No. 37, Knights of Pythias, the First German Sick and Aid Society and the Rondout Social Mannerchor. In politics Mr. Hauck was a staunch Democrat. The funeral will be held on Wednesday afternoon at 2 o’clock at his late residence, 115 Wurts street. Interment in Montrepose cemetery.

This is short history of the brewery, from Thierry’s breweriana website:

George Hauck was born in 1832 in Germany. His father, Adam Hauck, was a brewer. George Hauck came to the United Sates as a young man in 1849. He went to work in his fathers brewery in New York City. In 1852 Hauck went to Cincinnati to contiue his brewing studies, only to return to New York 4 years later. Upon his return to New York City he went to work for Kress & Schaffer. He then went to work for Lyon Brewery until it was destroyed by fire. In 1861 Hauck went to work for William Bertsche in Rondout NY. Bertsche had a brewery on the corner of Hone and Spring Streets, later the Jacob Hoffmann Brewery would be located there. By 1864 Hauck and George Dressel formed a partnership and began brewing on the Corner of Wurts and McEntees Streets. The brewery was called Geo. Dressel and Co. Lager Beer Brewery. They were soon producing 5,000 barrels of beer a year. Hauck and Dressel ran the brewery until Dressel died in 1884. That same year that the main brick brewery building was built near the corners of Wurts St and McEntee St. The bottling plant was near the corner of Hone St and McEntee St. The bottling plant had been built earlier into a hillside with a cave at the rear of the building for cooling and storage of the beer that they produced.

The cave had resulted from an unusual partnership between a brewer and a baker. William Bertsche and his partner, Martin Uhle, had dug out the cave as a result of a business venture in October of 1856. Bertsche and Uhle had entered into a contract with Abraham Crispell to construct a “tunnel” on Crispell’s property on Holmes St (now known as McEntee St). Accordind to the contract, said “tunnel” was only be used for the purpose of storing Lager Bier”. Bertsche and Uhle would pay a yearly fee of $15.00 for the privilage of storing beer in the newly constructed cave. Records showed that the fee of $15.00 was paid to Crispell for the years of 1857, 1858 and 1859.

Later, Martin Uhle, who had been a baker, became a saloon owner and sold Bertshce’s beer and the cave that they had dug together would become the property of Geroge Hauck, Bertsche’s former employee.

Hauck then ran the brewery alone until 1890, the year the brewery was incorporated as the George Hauck Brewing Company.

In 1892 the Brewery was producing it’s signature “Red Monogram” beer. There even was a “Red Monogram” baseball team sponsored by the Hauck Brewing Company. In 1908, advertisements appeared in the local directory for Hauck’s “Rock Cellar Brew”. It was named after the cave that the held the bottling plant. By 1912, the brewery was turning out approximately 35,000 barrels of beer a year.

On April 20th 1912, the founder, George Hauck, died at his home after a long illness. His son, Adam Hauck, assumed the Presidency upon his father’s death. John, became the Vice-President.

In 1918, prior to the passage of the 18th Amendment, better known as Prohibition, the brewery was remodeled for the manufacture of peanut oil production. It was marketed as “Salanut”, “Refined Virgin Peanut Oil”. The brewery was now known as the Hauck Food Products Corporation. On December 9th 1920, John Hauck, 62 years of age, died at his home after a long illness. In early 1922, the Hauck Food Products Corporation was sold to Bankers Underwriters Syndicate of New York. John Kearney, Adam Hauck’s brother in-law, remained Vice-President while Adam and Mary had no part in the operation of the peanut oil factory.

Plagued by taxes and competition, the brewery never re-opened after the repeal of prohibition in 1933. A city directory in 1934 showed the Frank Brady Brewery as the new owner. Frank Brady continued to brew “Red Monogram” beer during his brief ownership. City directories 1935-1939 listed the Peter Doelger Brewing Corp as being located at that address. Finally in 1940 the Staton Brewery Inc was listed as a “Wholesale Beverage” distributor. Shortly afterwards, the building laid empty and became a city owned property. An oil company attempted to purchase the site, but public opposition to a zoning change stopped the sale. The Hauck buildings were demolished around 1942. 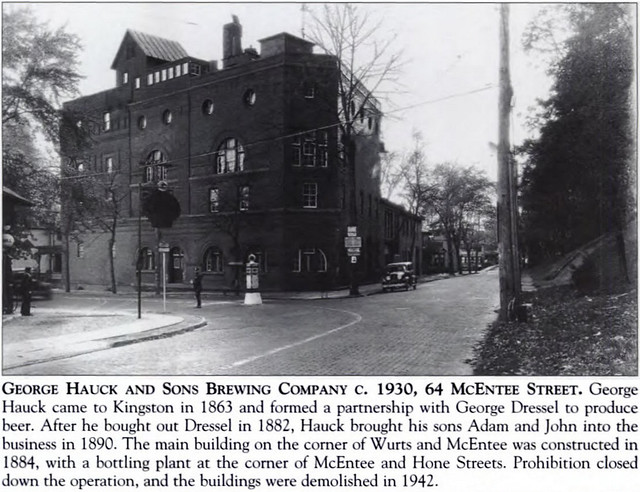 There was also a John Hauck Brewery in Ohio, but as far as I can tell they are not related. Also, George’s brother did start his own brewery in New Jersey, which was known as the Peter Hauck Brewery. 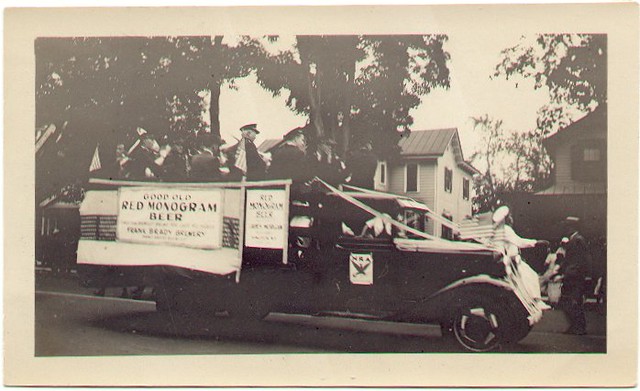 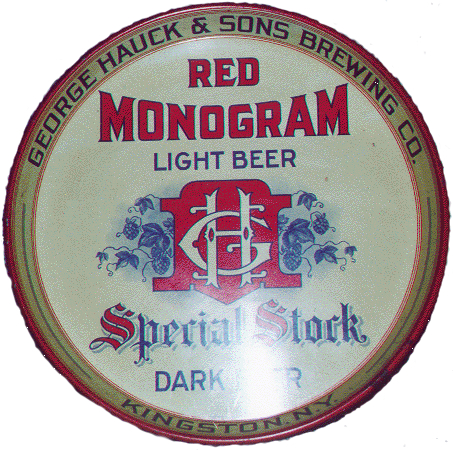 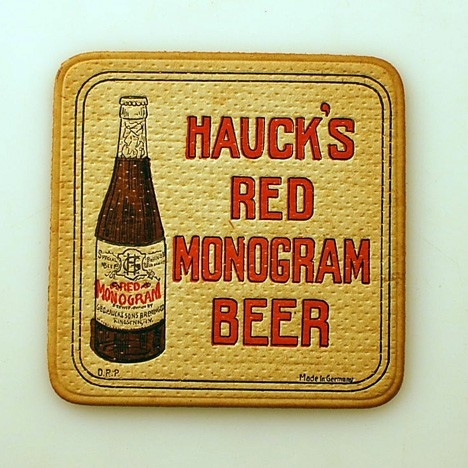