Today is the birthday of Gottlieb Sigismund Kirchhof (February 19, 1764-February 14, 1833). He was born in Teterow, Mecklenburg-Schwerin, but spent most of his life in St. Petersburg, Russia, and considered himself to be Russian. Trained as a pharmacist and a chemist, and “in 1812 he became the first person to convert starch into a sugar, by heating it with sulfuric acid. This sugar was eventually named glucose. He also worked out a method of refining vegetable oil, and established a factory that prepared two tons of refined oil a day. Since the sulfonic acid was not consumed, it was an early example of a catalyst.” In other research, “he provided the groundwork for scientific study of the brewing and fermentation processes.” 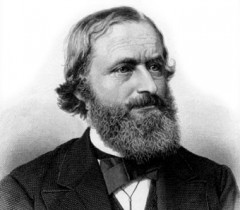 Here’s a biography from Encyclopedia.com.

Kirchhof’s father, Johann Christof Kirchhof, owned a pharmacy until 1783 and at the same time was a postmaster. His mother, the former Magdalena Windelbandt, was the daughter of a tin smelter.

In his youth Kirchhof helped his father run the pharmacy; after the latter’s death in 1785 he worked in various pharmacies in the duchy of Mecklenburg-Schwerin, qualifying as a journeyman apothecary. In 1792 he moved to Russia and worked in the same capacity at the St. Petersburg Chief Prescriptional Pharmacy. From 1805 he was a pharmacist and became a member of the Fizikat Medical Council, a scientific and administrative group that supervised the checking of the quality of medicaments and certain imported goods. Kirchhof began his chemical studies under Tobias Lowitz, the manager of the pharmacy, and A. A. Musin-Pushkin. A few of his works were undertaken jointly with A. N. Scherer, and all of his scientific activity was carried out in Russia. In 1805 he was elected a corresponding member, in 1809 an adjunct, and in 1812 an academician adjunct of the St. Petersburg Academy of Sciences. In 1801 Kirchhof was elected a member of the Mecklenburg Natural Science Society, in 1806 a member of the Russian Independent Economical Society, in 1812 a member of the Boston Academy of Sciences, in 1815 a member of the vienna Economical Society, and in 1816 a member of the Padua Academy of Sciences.

Kirchhof’s first major discovery was the decomposition of barite with water, which Lowitz reported in “Vermischte chemische Bemerkungen” (Chemische Annalen [1797], 179-181), explicitly mentioning the discoverer. Klaproth had discovered this reaction much earlier. In 1797 Kirchhof reported two important results: the bleaching of shellac, which had an appreciable significance for the production of sealing wax, and a wet process that made it possible to begin industrial production of cinnabar. Cinnabar was produced of such high quality that it supplanted imported cinnabar, and some was exported. In 1805 Kirchhof developed a method for refining “heavy earth” (barite) by allowing caustic potash to react with barium salts. In 1807 he entered a competition organized by the Independent Economical Society to develop a method for refining vegetable oil. In collaboration with Alexander Crichton he worked out the sulfuric acid method of refining oil and received a prize of 1,000 rubles. The two men founded an oil purifying plant in St. Petersburg on Aptekarskiy Island, the largest factory at that time, with an output of about 4,400 pounds of oil per day. In many respects (for example, in the method of adding acid and the clarification of oil by glue) Kirchhof’s method is closer to modern methods than that of Thénard (1801).

In 1809 Kirchhof resigned from the Chief Prescriptional Pharmacy but continued to carry out the assignments of the Fizikat Medical Council in his laboratory there; he also conducted investigations in his home laboratory. During this period he began prolonged research to find a method for producing gum from starch in order to supplant the imported products; he then began investigating the optimal conditions for obtaining sugar from starch.

Kirchhof studied the action of mineral and organic acids (sulfuric, hydrochloric, nitric, oxalic and so on) on starch and found that these acids inhibit the jelling of starch and promote the formation of sugar from starch. He also studied the effect of acids on the starches of potatoes, wheat, rye, and corn as well as the effect of acid concentration and temperature on the rate of hydrolysis. At the same time he was searching for new raw materials for producing sugar by the hydrolysis of starch. In 1811 Kirchhof presented to the St. Petersburg Academy of Sciences the samples of sugar and sugare syrup obtained by hydrolysis of starch in dilute acid solutions. He advanced a technological method for producing sugar that was based on his investigations published in 1812. Best results were obtained by adding 1.5 pounds of sulfuric acid in 400 parts of water to 100 pounds of starch. The duration of reaction was between twenty-four and twenty-five hours at 90-100° C. The bulk of the acid did not enter into the reaction with starch, because after completion of the reaction, Kirchhof neutralized it with a specific amount of chalk. This was the first controlled catalytic reaction.

In 1814 Kirchhof submitted to the Academy of Sciences his report “Über die Zucker bildung beim Malzen des Gestreides und beim Bebrühen seines Mehl mit kochendem Wasser,” which was published the following year in Schweigger’s Journal für Chemie und Physik. This report describes the biocatalytic (amylase) action, discovered by Kirchhof, of gluten and of malt in saccharifying starch in the presence of these agents. He showed that gluten induces saccharification of starch even at 40-60° C. in eight to ten hours. During the first hour or two the starch paste was converted into liquid, which after filtration became as transparent as water. Mashed dry barley malt saccharified the starch at 30° R. in one hour. Similarly, Kirchhof studied the starch contained in the malt, separating starch from gluten by digesting it with a 3 percent aqueous solution of caustic potash. The starch treated in this manner could not be converted into sugar. Thus he proved that malt gluten is the starting point for the formation of sugar, while starch is the source of sugar.

The catalytic enzyme hydrolysis of starch discovered by Kirchhof laid the foundation for the scientific study of brewing and distilling and resulted in the creation of the theory of the formation of alcohol.

In his last years of scientific activity Kirchhof developed a method of producing unglazed pottery by treating it with drying oils; a method to refine chervets (a substitute for cochineal) from oily substances; and a method for rendering wood, linen, paper, and other substances nonflammable. For refining chervets he suggested the regeneration of turpentine by mixing it with water and then distilling the mixture.

And here’s a more thorough explanation of what he discovered, and how it applied to brewing beer, from Science Clarified:

A Brief History of Catalysis

Long before chemists recognized the existence of catalysts, ordinary people had been using the process of catalysis for a number of purposes: making soap, for instance, or fermenting wine to create vinegar, or leavening bread. Early in the nineteenth century, chemists began to take note of this phenomenon.

In 1812, Russian chemist Gottlieb Kirchhof was studying the conversion of starches to sugar in the presence of strong acids when he noticed something interesting. When a suspension of starch in water was boiled, Kirchhof observed, no change occurred in the starch. However, when he added a few drops of concentrated acid before boiling the suspension (that is, particles of starch suspended in water), he obtained a very different result. This time, the starch broke down to form glucose, a simple sugar, while the acid—which clearly had facilitated the reaction—underwent no change.

Around the same time, English chemist Sir Humphry Davy (1778-1829) noticed that in certain organic reactions, platinum acted to speed along the reaction without undergoing any change. Later on, Davy’s star pupil, the great British physicist and chemist Michael Faraday (1791-1867), demonstrated the ability of platinum to recombine hydrogen and oxygen that had been separated by the electrolysis of water. The catalytic properties of platinum later found application in catalytic converters, as we shall see.

In 1835, Swedish chemist Jons Berzelius (1779-1848) provided a name to the process Kirchhof and Davy had observed from very different perspectives: catalysis, derived from the Greek words kata (“down”) and lyein (“loosen.”) As Berzelius defined it, catalysis involved an activity quite different from that of an ordinary chemical reaction. Catalysis induced decomposition in substances, resulting in the formation of new compounds—but without the catalyst itself actually entering the compound.

Berzelius’s definition assumed that a catalyst manages to do what it does without changing at all. This was perfectly adequate for describing heterogeneous catalysis, in which the catalyst and the reactants are in different phases of matter. In the platinum-catalyzed reactions that Davy and Faraday observed, for instance, the platinum is a solid, while the reaction itself takes place in a gaseous or liquid state. However, homogeneous catalysis, in which catalyst and reactants are in the same state, required a different explanation, which English chemist Alexander William Williamson (1824-1904) provided in an 1852 study.

In discussing the reaction observed by Kirchhof, of liquid sulfuric acid with starch in an aqueous solution, Williamson was able to show that the catalyst does break down in the course of the reaction. As the reaction takes place, it forms an intermediate compound, but this too is broken down before the reaction ends. The catalyst thus emerges in the same form it had at the beginning of the reaction.

Enzymes: Helpful Catalysts in the Body

In 1833, French physiologist Anselme Payen (1795-1871) isolated a material from malt that accelerated the conversion of starch to sugar, as for instance in the brewing of beer. Payen gave the name “diastase” to this substance, and in 1857, the renowned French chemist Louis Pasteur (1822-1895) suggested that lactic acid fermentation is caused by a living organism.

In fact, the catalysts studied by Pasteur are not themselves separate organisms, as German biochemist Eduard Buchner (1860-1917) showed in 1897. Buchner isolated the catalysts that bring about the fermentation of alcohol from living yeast cells—what Payen had called “diastase,” and Pasteur “ferments.” Buchner demonstrated that these are actually chemical substances, not organisms. By that time, German physiologist Willy Kahne had suggested the name “enzyme” for these catalysts in living systems.

Enzymes are made up of amino acids, which in turn are constructed from organic compounds called proteins. About 20 amino acids make up the building blocks of the many thousands of known enzymes. The beauty of an enzyme is that it speeds up complex, life-sustaining reactions in the human body—reactions that would be too slow at ordinary body temperatures. Rather than force the body to undergo harmful increases in temperature, the enzyme facilitates the reaction by opening up a different reaction pathway that allows a lower activation energy.

One example of an enzyme is cytochrome, which aids the respiratory system by catalyzing the combination of oxygen with hydrogen within the cells. Other enzymes facilitate the conversion of food to energy, and make possible a variety of other necessary biological functions.

Because numerous interactions are required in their work of catalysis, enzymes are very large, and may have atomic mass figures as high as 1 million amu. However, it should be noted that reactions are catalyzed at very specific locations—called active sites—on an enzyme. The reactant molecule fits neatly into the active site on the enzyme, much like a key fitting in a lock; hence the name of this theory, the “lock-and-model.”