Today is the birthday of J.C. Jacobsen, or Jacob Christian Jacobsen (September 2, 1811-April 30, 1887). He “was a Danish industrialist and philanthropist best known for founding the brewery Carlsberg,” which he named for his son Carl Jacobsen. 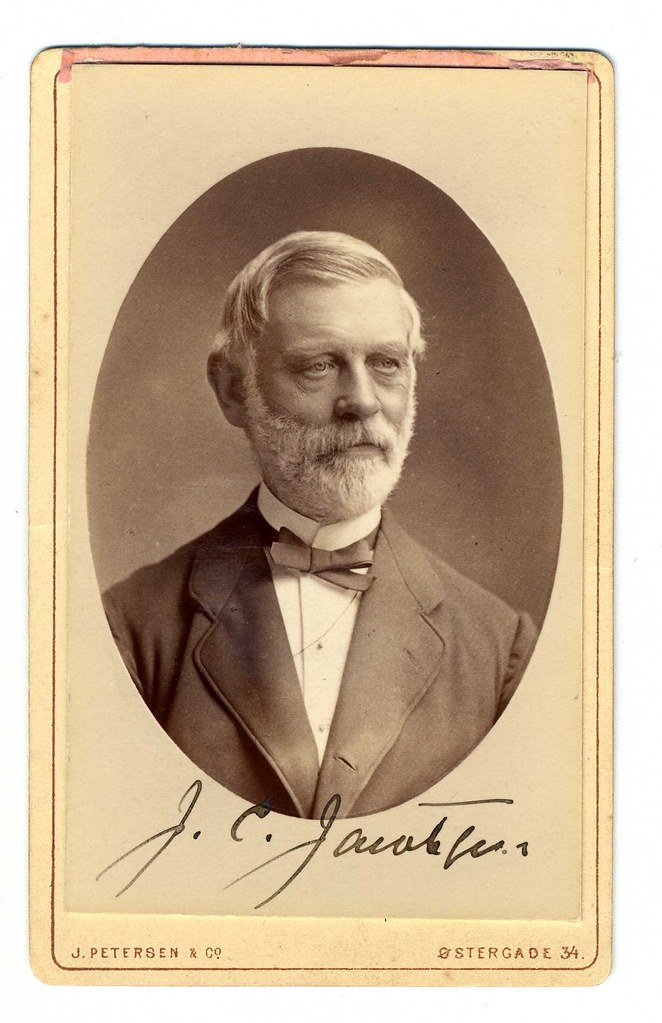 Here’s a short biography from his Wikipedia page:

He had no formal academic or scientific training (although he had attended some lectures by Hans Christian Ørsted). In the 1840s he had come to realise that production of beer, which had until then been done in numerous small breweries, now had to be based on scientific methods and to be industrialised. 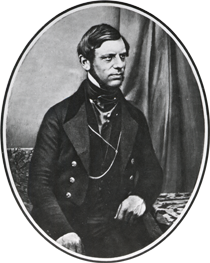 Jacobsen was only 24 when he founded the brewery.

Starting in 1847, he established his brewery Carlsberg (named after his son, Carl Jacobsen), in Valby on the outskirts of Copenhagen, on a site where it has remained since. Being extremely scrupulous as for the securing of high quality beer, in 1875 he founded the Carlsberg Laboratory.

He took much interest in public affairs and supported the National Liberal Party – being gradually more of a conservative – both as a Member of Parliament for some periods between 1854 and 1871 and as a strong supporter of the case of defence. Besides he was a well-known patron of art. After the fire of Frederiksborg Palace in 1859 he paid its rebuilding.

1876 he also founded “Carlsberg-fondet” – the Carlsberg Foundation that became his heir because of family problems of the next years. A bitter conflict with his son Carl led to the latter’s foundation of the Ny Carlsberg (New Carlsberg) Brewery 1882. A reconciliation was however obtained 1886. This conflict was the theme of a debated Danish TV drama series aired in 1997. 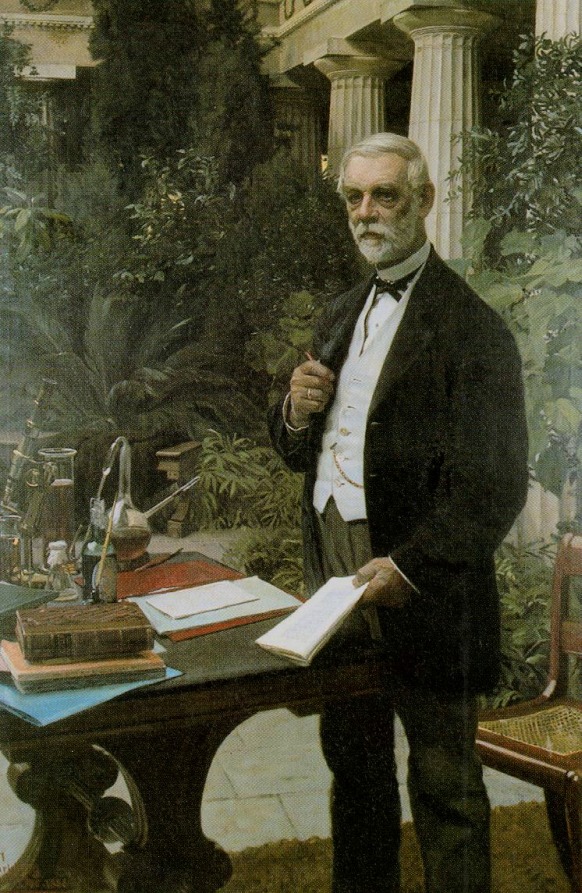 Here’s the biography that Carlsberg Group has on their website, entitled “Creating Carlsberg: The Greatest Gift of J.C. Jacobsen.”

It wouldn’t be hyperbolic to dub Jacob Christian Jacobsen, better known to most as J.C., “a legend.” The man did, after all, found one of the world’s most renowned breweries. And well over a century after his death, he remains one of Denmark’s most epochal characters.

It was a Wednesday – November 10th, 1847 – when J.C. Jacobsen’s newly created brewery Carlsberg completed its first brew. Shortly after, his traditional Bavarian lager was introduced to the Danish masses. The name Carlsberg was chosen to combine the name of his sole-surviving son “Carl” and the German word “berg,” meaning hilltop after the hilltop it was built upon.

A young boy’s passion for brewing and science

Strange as it may sound today, it was clear from a very young age that J.C. would dedicate his life to brewing. He was, after all, the son of a brewer. It was in his blood.

As a child, J.C. could often be found experimenting in the basement of his father’s brewery on Brolæggerstræde in central Copenhagen. He was completely dedicated to the craft of beer and the intricacies of the natural sciences, both of which he went on to study as an adult at the new Technical University in Copenhagen. He sat in on lectures taught by H.C. Ørsted—a chemist who was particularly interested in the fermentation and brewing industries—and it was these lectures that inspired J.C.’s lifelong journey to “develop the art of making beer to the greatest possible degree of perfection.”

The year was 1836 when, in a wine merchant’s cellar, J.C. tasted his first imported Bavarian lager beer. Impressed and intrigued, J.C. ventured to Hamburg to study the production method first-hand. Upon returning to Copenhagen, he spent the next several years producing and selling small batches of Bavarian beer.

In 1838, J.C. married Laura Holst, a merchant’s daughter, and on March 2nd, 1842 their son Carl was born. But becoming a family man didn’t slow down J.C.’s pursuit towards crafting the perfect beer.

In 1845 he traveled to the Zum Späten brewery in Munich, where he was introduced to bottom-fermenting yeast. Although he didn’t know it at the time, this was to become the backbone of the beer produced at Carlsberg. 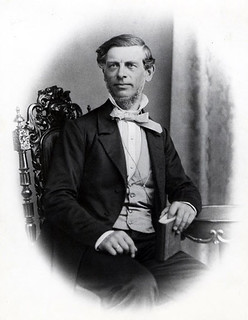 Beyond Beer: Establishing The Carlsberg Foundation

But more than a brewer and entrepreneur, J.C. was a patron of the arts, sciences, and, most notably, his home country of Denmark.

In 1875, he founded the Carlsberg Laboratory to explore and improve the beer-making process. It was here where the method for cultivating pure yeast was discovered—a discovery that J.C. shared with brewers all across the globe to improve the quality of beer everywhere – not just in his own brewery. A year later, using funds from the brewery, he created The Carlsberg Foundation to provide support to the Carlsberg Laboratory and also to Danish research ranging from the natural sciences and mathematics to the humanities and philosophy. The Carlsberg Foundation still exists today as a major contributor to modern science and art. It is run by a team of scientists who are the deciding shareholders of Carlsberg A/S and are also responsible for appointing a handful of the company’s board of directors—including the chairman.

Due to the turbulent nature of the relationship between J.C. and his son Carl, J.C. left his brewery to the Foundation—not Carl—when he passed away. In 1902, about a decade before Carl’s death, the Foundation also claimed ownership of the New Carlsberg Brewery.

Historically, The Carlsberg Foundation has been a part of many momentous projects in Denmark. In 1878, it sponsored the restoration of Frederiksborg Castle during its transformation into the Museum of National History. And in the spirit of J.C. himself, the Foundation continues to provide generous support to Danish pioneers. For example, it funded the building of The Danish Institute in Athens, a research center for archeologists, Greek historians, and philologists. There’s also the Danish Institute in Rome, established by The Carlsberg Foundation in 1967 to facilitate a cultural exchange between Denmark and Italy. In addition, The Foundation awards yearly monetary grants to Danish scientific researchers.

Outside of Carlsberg, J.C. held interests in politics and the arts. He served as a member of the Danish Parliament (“Folktinget”) for two terms. He designed and funded the Palm House at the University of Copenhagen’s Botanical Garden. He also designed his own Villa, which became a meeting grounds for the era’s intellectual elite like author Hans Christian Andersen and chemist Louis Pasteur.

His ingenuity and generosity continue to inspire generations of Carlsberg employees, who want to achieve, as their predecessor once said, “the greatest possible degree of perfection.” 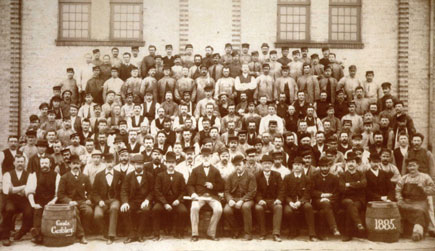 J.C. Jacobsen with his entire staff.
Photographed in 1885 at the Carlsberg brewery.

Before J.C. created Carlsberg, he was simply the son of Caroline Frederikke Schelbeck and Christen Jacobsen. Caroline was the daughter of a Copenhagen silk weaver, while Christen grew up a farmer’s son in Northern Jutland. In 1801, Christen packed his bags and made way for Copenhagen to start a better life for himself, quickly finding work as a brewery hand in the King’s Brew-House (Kongens Bryghus) and shortly thereafter becoming the director. By 1826 he’d set up his own brewery on Brolæggerstræde in central Copenhagen, in the same building where his son J.C. spent his childhood.

J.C., the first and only child of Caroline and Christen, was born on September 2nd, 1811. Drawn to his father’s work at an early age, J.C. took on many responsibilities as his father’s health began to fail. In 1835, when Christen died, J.C. continued his father’s legacy and ran the family brewery. When his mother died a decade later, J.C. inherited both the brewery and also a great sum of money, which was later invested into the founding of Carlsberg Brewery. 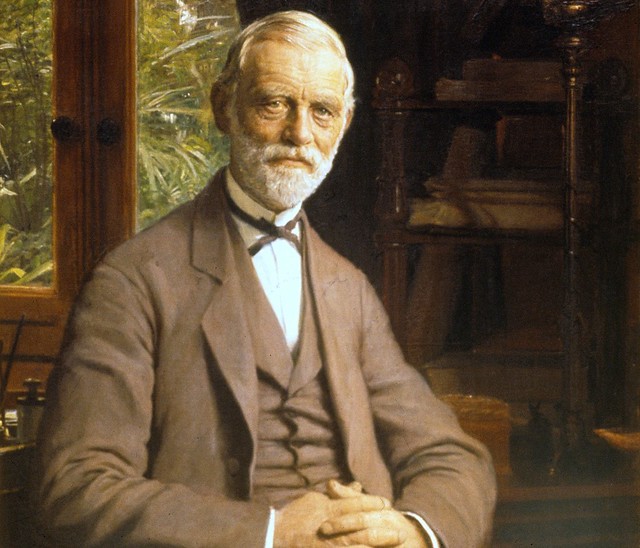 And here’s a promotional video history of Carlsberg, created by the Carlsberg Group:

A few years ago I was in Copenhagen, meeting with J.C. Jacobsen, or at least standing in front of his portrait while Martyn Cornell snapped our photo. 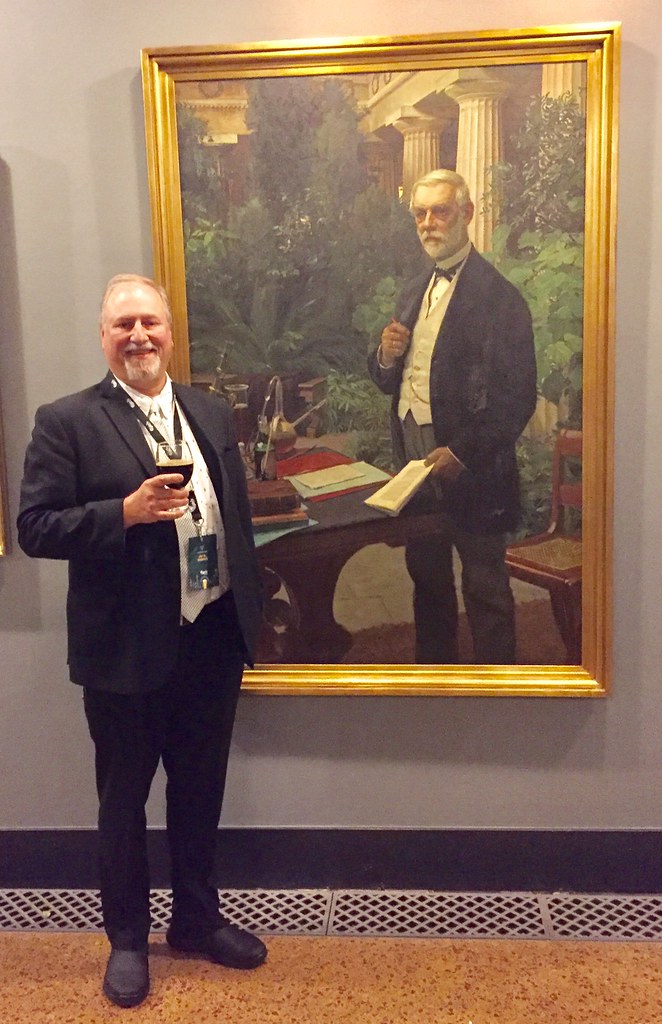