Today is the birthday of Louis Hennepin (May 12, 1626-c. 1705). Hennepin “was a Roman Catholic priest and missionary of the Franciscan Recollet order (French: Récollets) and an explorer of the interior of North America.” His name was used for a Farmhouse Saison brewed by Brewery Ommegang known as Ommegang Hennepin. 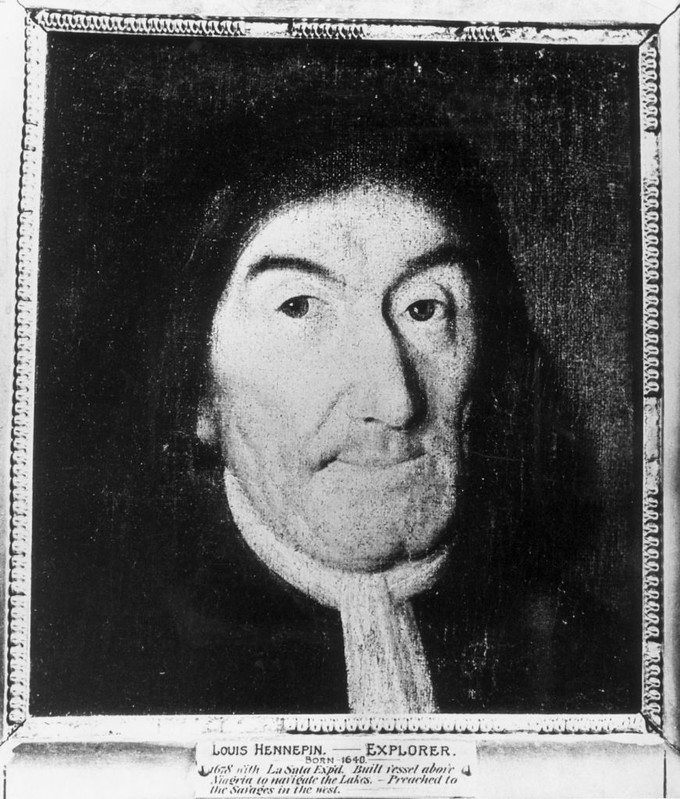 Antoine Hennepin was born in Ath in the Spanish Netherlands (present-day Hainaut, Belgium). In 1659, Béthune, the town where he lived, was captured by the army of Louis XIV of France. Henri Joulet, who accompanied Hennepin and wrote his own journal of their travels, called Hennepin a Fleming (i.e. a native of Flanders).

At the request of Louis XIV the Récollets sent four missionaries to New France in May 1675, including Hennepin, accompanied by René Robert Cavelier, Sieur de la Salle. In 1678, Hennepin was ordered by his provincial superior to accompany La Salle on an expedition to explore the western part of New France. Hennepin was 39 when he departed in 1679 with La Salle from Quebec City to construct the 45-ton barque Le Griffon, sail through the Great Lakes, and explore the unknown West.

Hennepin was with La Salle at the construction of Fort Crevecouer (near present-day Peoria, Illinois) in January 1680. In February, La Salle sent Hennepin and two others as an advance party to search for the Mississippi River. The party followed the Illinois River to its junction with the Mississippi. Shortly thereafter, Hennepin was captured by a Sioux war party and carried off for a time into what is now the state of Minnesota.

In September 1680, thanks to Daniel Greysolon, Sieur Du Lhut, Hennepin and the others were given canoes and allowed to leave, eventually returning to Quebec. Hennepin returned to France and was never allowed by his order to return to North America. Local historians credit the Franciscan Récollect friar as the first European to step ashore at the site of present-day Hannibal, Missouri.

Two great waterfalls were brought to the world’s attention by Hennepin: Niagara Falls, with the most voluminous flow of any in North America, and the Saint Anthony Falls in what is now Minneapolis, the only waterfall on the Mississippi River. In 1683, he published a book about Niagara Falls called A New Discovery. The Regionalist painter Thomas Hart Benton created a mural, “Father Hennepin at Niagara Falls” for the New York Power Authority at Lewiston, New York.

Because of explorations with La Salle throughout the Great Lakes region, there are geographic places named for Hennepin in Illinois, Michigan, New York, Ontario Canada, but especially Minnesota, where he’s considered the unofficial godfather of the state. For example, here’s a more thorough entry on Hennepin from the Minnesota Encyclopedia:

Father Louis Hennepin, a Recollect friar, is best known as an early explorer of Minnesota. He gained fame in the seventeenth century with the publication of his dramatic stories of the exploration of the Mississippi River. Father Hennepin spent only a few months in Minnesota, but his influence is undeniable. While his widely read travel accounts were more fiction than fact, they allowed Hennepin to leave a lasting mark on the state.

Louis Hennepin was likely born in 1640, although some sources suggest it was as early as 1626. The son of a wealthy banker, he was baptized in the small town of Ath in what is now Belgium on April 7, 1640. Hennepin joined the Recollect Friars at a monastery in Béthune, France, and was ordained a priest in 1666. A few years later, Hennepin asked his superiors for permission to join the Recollect missionaries in North America. In 1675, he sailed to Quebec.

The Recollects were a French branch of the Franciscan order. They were active throughout France’s territory in North America. Hennepin spent his first three years as a missionary in the area of the eastern St. Lawrence River, ministering to voyageurs, colonists, and American Indian communities. In 1678, Hennepin was chosen to accompany René-Robert Cavelier Sieur de la Salle on his exploration of the Mississippi. In 1680, while on La Salle’s expedition, Hennepin and two other members of the party, Michel Accault and Antoine Auguelle (Picard du Gay), were sent to explore the section of the Mississippi north of the Illinois River.

The three men set out early in March 1680, progressing north while avoiding ice that remained on the river. They had just reached Lake Pepin on April 11 or 12 when they encountered a Dakota war party. The Dakota took the three men captive and transported them to a village near Lake Mille Lacs. Hennepin, Accault, and Auguelle lived in the Dakota village until late June or early July of 1680.

At midsummer, Hennepin and Auguelle received permission from the Dakota to canoe down the Mississippi to the mouth of the Wisconsin River. There they planned to collect supplies that the La Salle expedition had left for them. During this trip Hennepin and Auguelle first encountered the waterfall on the Mississippi that Hennepin named in honor of his patron saint, St. Anthony of Padua.

During his own expedition, Daniel Greysolon, Sieur du Lhut, heard rumors that the three men were being held captive. On July 25, 1680, Greysolon arrived at the Dakota village to negotiate the release of Hennepin, Accault, and Auguelle. By August, the three captives had begun their journey back to French forts in the east. Hennepin left Canada in the fall of 1681 and returned to France.

Once in France, Hennepin embarked upon the literary career that would bring him both fame and criticism. His first book, A Description of Louisiana, newly discovered to the South-West of New France, was published in Paris in 1683. It detailed his travels, his experiences living with the Dakota, and his discovery of St. Anthony Falls. From the start, Hennepin’s work was a blend of myth and fact. In his travel accounts he made waterfalls much higher and wildlife far more dangerous. He depicted the American Indian populations of North America as barbarous savages. An egotistical and vain man, Hennepin portrayed himself as La Salle’s favorite and most trusted confidant.

In his following two books, published in 1697 and 1698, Hennepin exaggerated further. He claimed that he had traveled from Illinois down the Mississippi to the Gulf of Mexico and back before being captured by the Dakota. The details of his improbable canoe trip, covering some three thousand miles in only a month, were taken directly from accounts of La Salle’s own trip down the Mississippi two years after Hennepin’s time in Minnesota. While his books continued to circulate widely, his reputation was significantly damaged.

Little is known about the end of Hennepin’s life. Around 1700 he traveled to Rome to seek funding from Franciscan authorities. Some say that Hennepin died in Rome around 1701, while other sources suggest he returned to Utrecht and died in 1705. Hennepin’s memory lives on in the many parks, landmarks, schools, and streets, including one in his home city in Belgium, named in his honor. 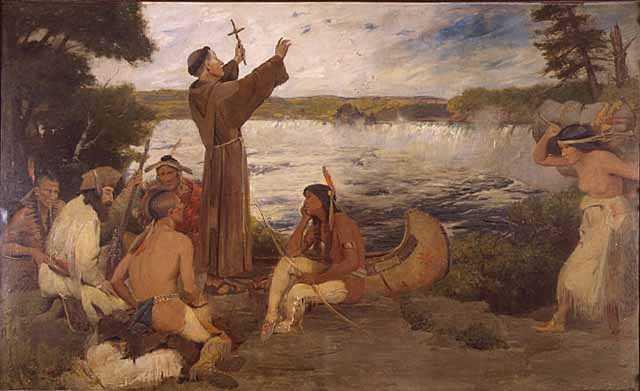 Perhaps most amazing, Hennepin is believed to be the first European to see the splendor of Niagara Falls, and at a minimum his journal account of seeing them in 1678 is the earliest known written reference to the famous falls. 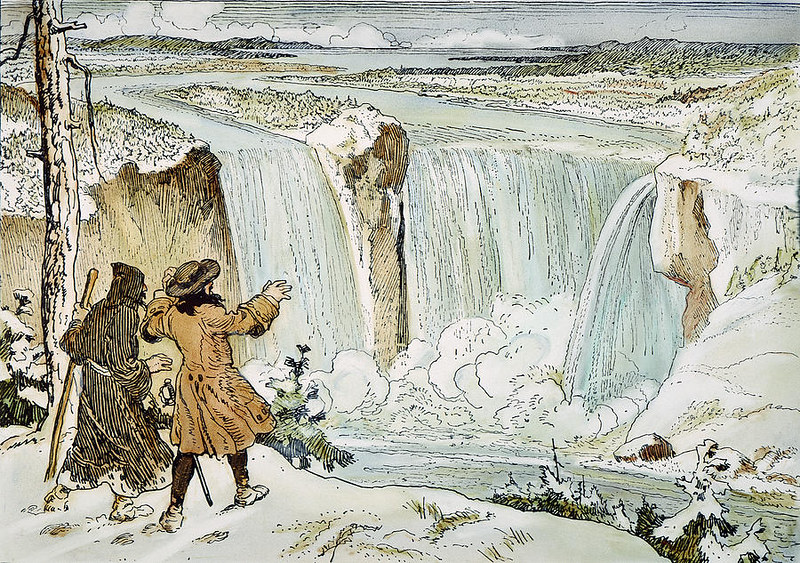 Father Hennepin at Niagara Falls in 1678. Drawing by C.W. Jefferys. 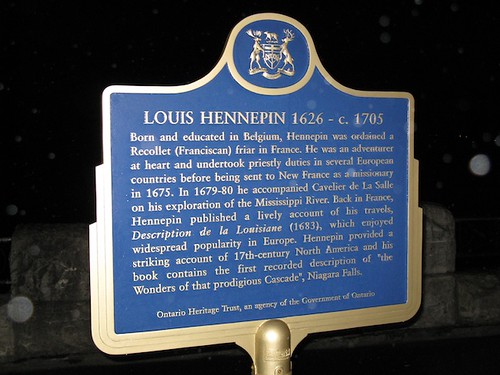