Today is the birthday of Peter Ganser (June 24, 1836-August 5, 1915). He was born in Germany, but settled in Steele County, Minnesota, buying the Knobloch & Mannheim brewery and founding the Peter Ganser brewery in Owatonna, along with his brother Adam. It was generally known as the Peter Ganser, City Brewery, off and on from 1865, before it finally closed a few years into prohibition. 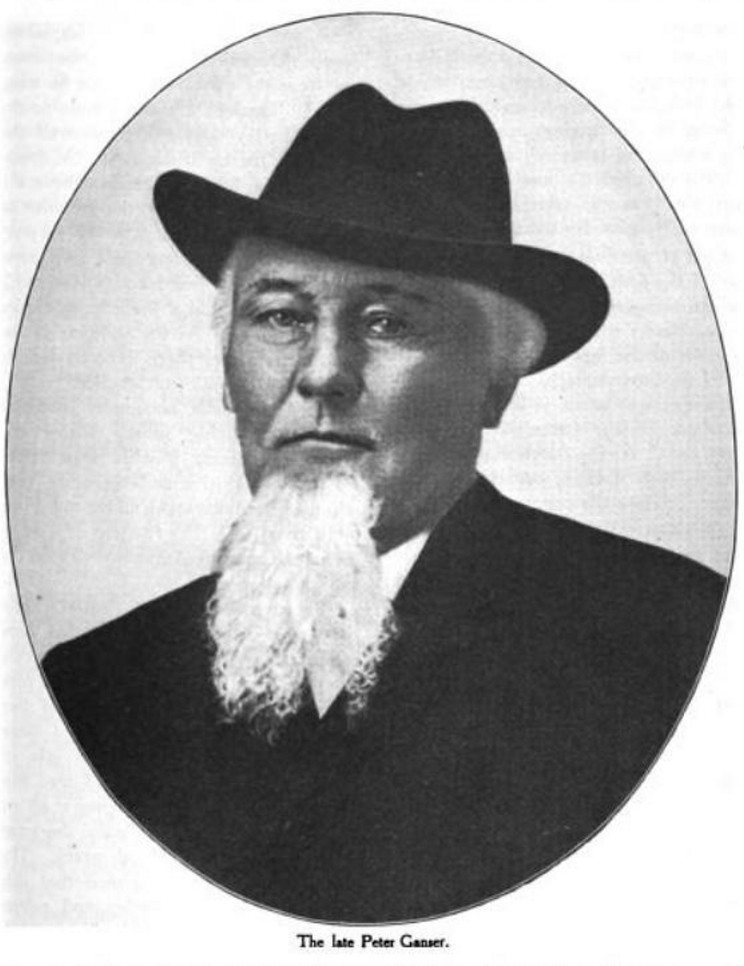 Here’s his obituary, from the American Brewers Review: 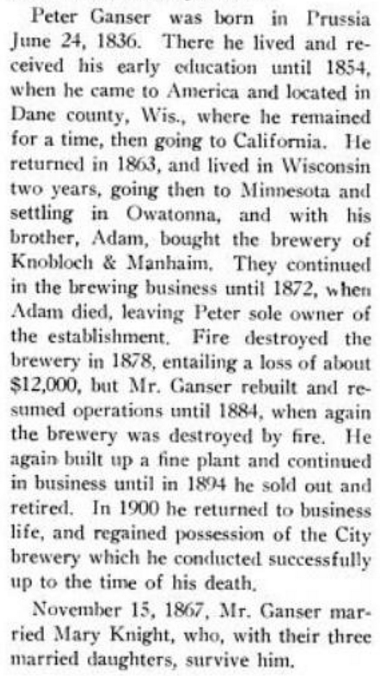 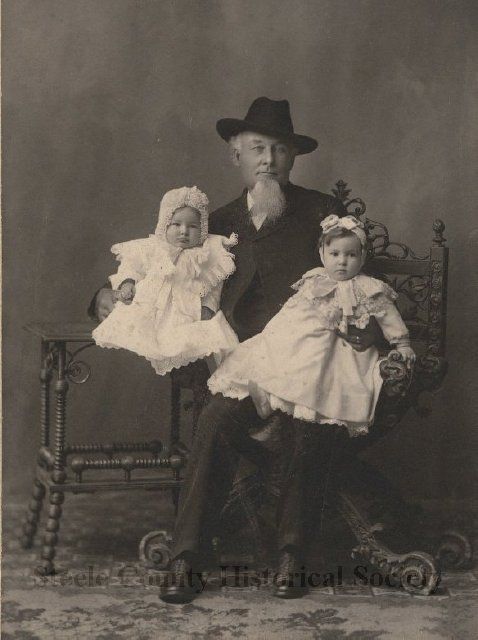 Local brewer Peter Ganser sits on an ornate chair, holding two of his daughters. On the left is Adeline, who later became Mrs. William Zamboni; on the right is his daughter, Catherine, who later married Harry Brown (from the Steele County Historical Society).

And here’s another account from the “History of Rice & Steele Counties, Minnesota, Illustrated, Vol. II,” and published in 1910:

Peter Ganser, proprietor of the Owatonna City Brewery, is one of those substantial citizens, who, in building the foundations for their own fortunes, find the time to take an interest in all worthy causes that tend toward the development of the community. He combines liberality with shrewd common sense and business ability and from his first settlement here he has had an unbounded faith in Owatonna’s future. Mr. Ganser was born in Prussia, Germany, June 24, 1836. He received his early education in the public schools and remained in his native country until 1854, when he came to America and located in Dane county, Wisconsin, where he lived for a time and then went to California. In 1863 he returned to Wisconsin and there remained until 1865 when he came to Owatonna and, together with his brother, Adam, purchased the city brewery, which they continued together until 1872, at which time the brother died. The subject of this sketch then became the sole owner and proprietor. In 1878 the brewery was destroyed by fire, entailing a loss of about $12,000. Undaunted by this loss, Mr. Ganser rebuilt, but in 1884 again suffered a similar disaster. The present building, to which additions and improvements have been made from time to time, was erected in 1884. In 1879, Mr. Ganser, in company with Jacob Glaeser, erected the building then known as the Germania Hall. Mr. Glaeser has carried on a large and increasing business from year to year. In 1894 he sold out his business for six years lived a retired life. In 1900 he again came into possession of the brewery, which he has since conducted. Mr. Ganser was married in 1867 to Mary Knight, who was born in Indiana. The fruit of this union was three children, viz: Margaret, now the wife of William Fleckenstein of the Fleckenstein Brewery at Faribault; Adeline, now Mrs. W. C. Zamboni; Kate, now Mrs. H. D. Brown, of Owatonna. Mr. Ganser is a Democrat in political faith. He takes an active interest in public affairs, and served as a mayor of Owatonna one term, and alderman of the fourth ward for two years. Mr. Ganser is a self-made man, enterprising in business, and has won his position by persevering efforts. He lives in a very find residence at 508 South Oak street. 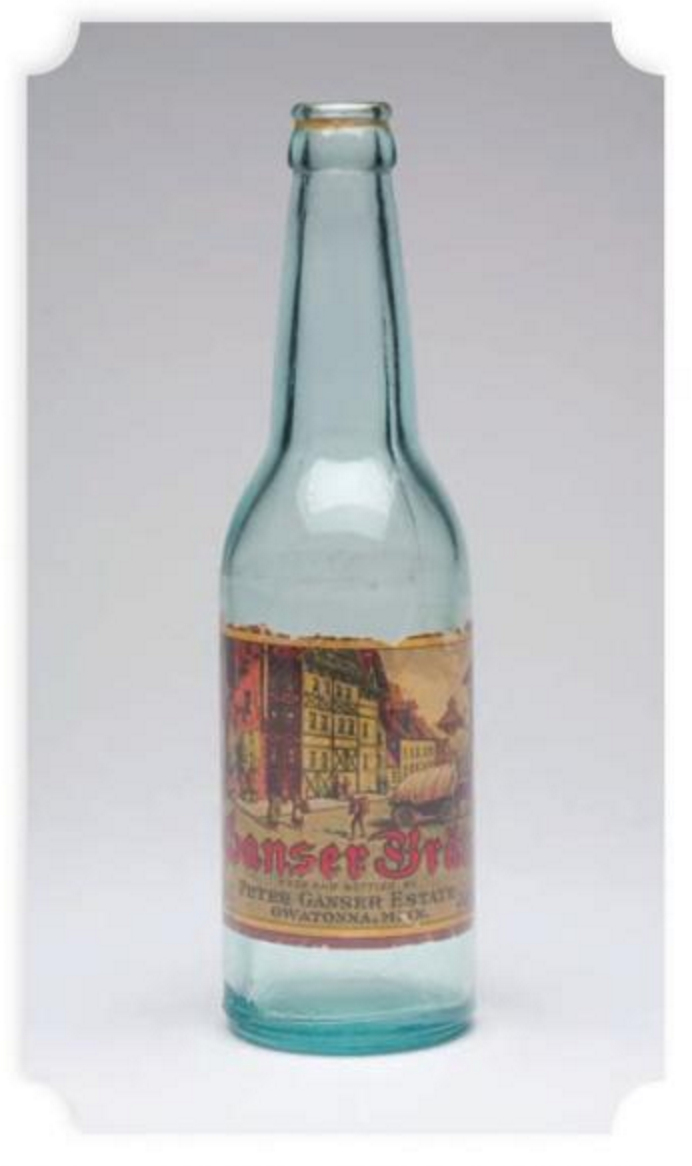 And this is from Land of Amber Waters: The History of Brewing in Minnesota: 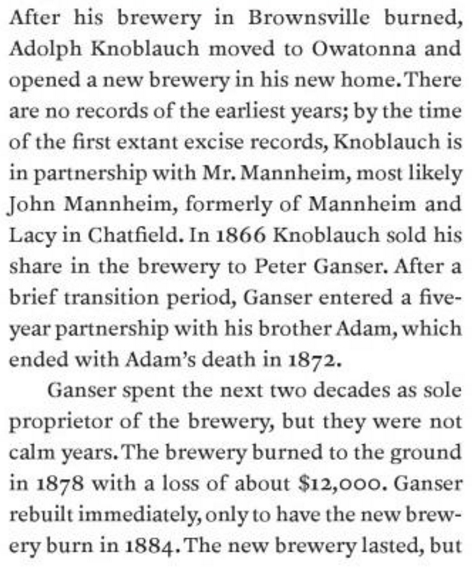 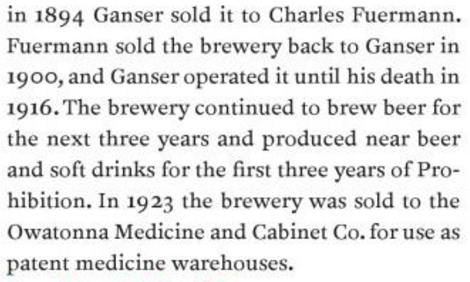 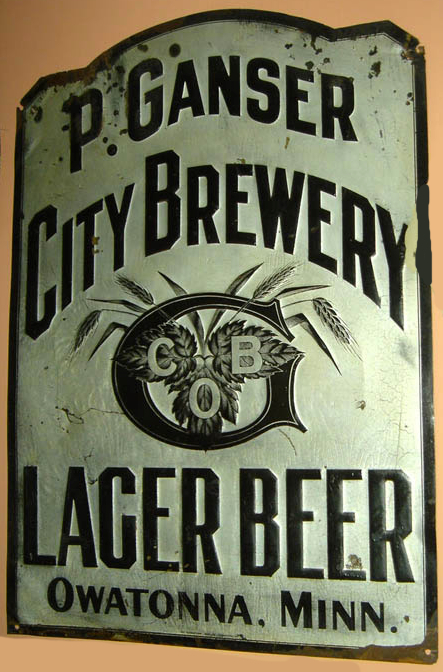