Today is the birthday of Max McGee. Don’t worry if you’ve never heard his name, most people haven’t. He “was a professional football player, a wide receiver for the Green Bay Packers in the NFL. He played from 1954 to 1967, and is best known for his 7 receptions for 138 yards and two touchdowns in the first Super Bowl in 1967.” And it’s his performance in that first Super Bowl that was so amazing, in no small part because he was badly hungover.

In 1967, McGee was at the end of his career. In fact, it was the second-to-last season he played. He was not a starter for the Packers that year they went to the first Super Bowl, and caught only four balls all year. So apparently, not expecting to play at all during the Super Bowl, the night before he broke curfew and spent the night with two women he met at the hotel bar. He rolled in around 6:30 a.m. the morning of the big game, passed Bart Starr in the hallway just getting up, and tried to catch a few winks before game time.

He was feeling pretty rough, but took his spot on the bench, fully expecting to be glued to it all game. He told starting wide receiver Boyd Dowler “I hope you don’t get hurt. I’m not in very good shape,” referring to the fact that he was badly hungover. Unfortunately, shortly after the game started, Dowler separated his shoulder and came out of the game, replaced by McGee. He had to borrow a helmet from another teammate, because he had left his in the locker room. McGee was reportedly startled as he heard Vince Lombardi yell, “McGee! McGee! Get your ass in there.” 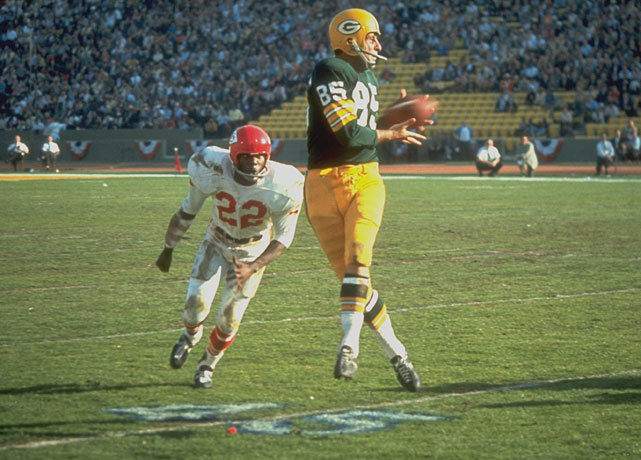 A few plays later, McGee made a one-handed reception of a pass from Bart Starr, took off past Chiefs defender Fred Williamson and ran 37 yards to score the first touchdown in Super Bowl history. This was a repeat of his performance in the NFL championship game two weeks earlier, when he had also caught a touchdown pass after relieving an injured Boyd Dowler. By the end of the game, McGee had recorded seven receptions for 138 yards and two touchdowns, assisting Green Bay to a 35-10 victory.

Just check out that first catch, for the very first touchdown in a Super Bowl. Unfortunately, the NFL won’t allow you to watch the video on my site, even though you can see it on YouTube or directly the NFL website. Thank goodness they protected a 50-year old event from being seen here. Who knows what money might have been lost by them had you been able to see it here instead of their own website.

Here’s more about the story from Sports Illustrated:

McGee came to California ready to party. He chafed at a week of locked-down training camp in Santa Barbara and when the team moved to Los Angeles on the eve of the big game, he made plans with those two flight attendants, assuming that Hornung, who was nursing an injured neck and wouldn’t play in the game, would join him. McGee snuck out after assistant coach Hawg Hanner’s 11 p.m. bed check and soon afterward, called Hornung. “He called and said ‘I’ve got two girls and yours is gorgeous,’ ” says Hornung. ” ‘Come out and have a couple drinks with us.’ ” The fine was at least $5,000 and Hornung was getting married later that week and his neck was sore. He declined. The next time he heard from McGee was at 6:30 the next morning. “He called from the lobby and asked if they did a second check. I said ‘No, you lucky bastard, now get your ass up here.’ ”

Before every game, Dowler, Dale and McGee would have a brief, ritual meeting to go over the game plan and review tendencies one last time. “We’re having our little meeting,” says Dowler, 79 and living in Richmond, Va., “and Max says, ‘Whatever you do, don’t go down today.’ I said, What do you mean? Max says, ‘I was out all night and I had a few more drinks than I should have and I didn’t get much sleep. So just don’t go down.'” 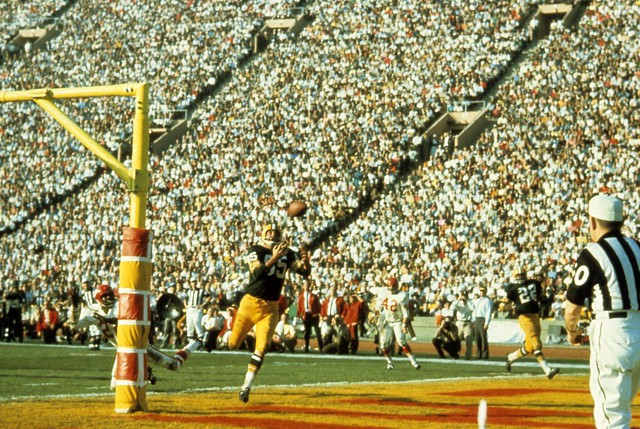 Dowler says, “Max had a strong constitution. I figured he could deal with it. But he did not expect to play.” This was a potential problem. Dowler had played most of the 1965 season and all of the ’66 season with a bad right shoulder; a calcium deposit had developed on the joint. Yet the Packers’ coaching staff had seen weaknesses in the Chiefs’ pass defense, including a propensity to leave the middle of the field open on blitzes. Starr was going to throw the ball extensively. “Plus, their defensive backs,” says Dowler. “They had ‘The Hammer’ [future Hollywood actor Fred Williamson] on one side and some other guy, No. 22 [Willie Mitchell] on the other side. Neither one of them were very good, one-on-one. It wasn’t going to be like trying to beat Lem Barney or Night Train Lane [of the Detroit Lions].”

(McGee knew this, too. Maraniss, in When Pride Still Mattered, quotes McGee as telling Packers broadcaster Ray Scott, “I’ve been studying film and I’ve found me a cornerback. I’m gonna have him for breakfast, lunch and dinner.” Still, if he had expected to play, he most likely would have stayed in the night before. Or possibly not.)

On the Packers’ first series, McGee took a seat next to Hornung on the bench and made small talk about the night before and Hornung’s upcoming wedding. On the field, Lombardi opened with three consecutive running plays. On the third, Dowler executed a crackback block on Chiefs’ free safety Johnny Robinson, who was dropping down in run support. “My shoulder was not in good shape at all coming into the game,” says Dowler. “I usually put a foam pad underneath my shoulder pad, but since we were going to be throwing the ball a lot, I wanted to have some flexibility. I took the pad out. When I hit Johnny Robinson, I heard the calcium deposit crack and I knew immediately that I was finished.” 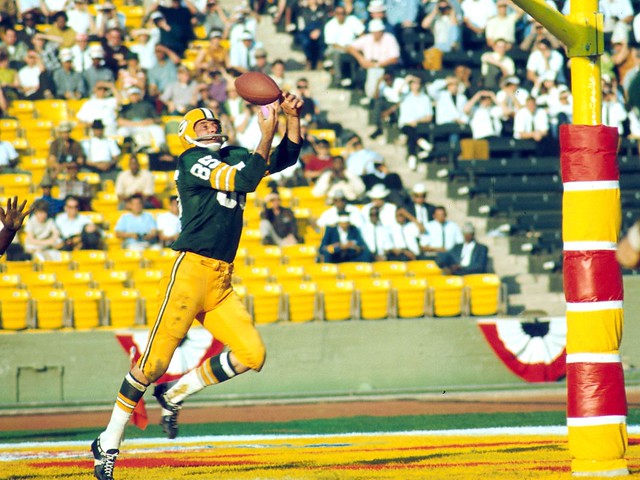 McGee was summoned into the game, but couldn’t find his helmet. He put on a giant lineman’s helmet with a full cage and on his first snap missed connecting with Starr on a curl route. On the Packers’ next possession, Starr came out throwing: 11 yards to tight end Marv Fleming, 22 yards to running back Elijah Pitts, 12 yards to Dale. And then on third-and-three from the Kansas City 37, McGee ran a simple skinny post against Mitchell’s outside position and broke wide open. Robinson had blitzed, leaving acres of green in the middle of the secondary. Starr’s pass was far behind McGee, who reached back, controlled the ball and then turned straight upfield, into the end zone and history. It was a remarkable catch, by a man with a hangover and no sleep, running at full speed. McGee’s second touchdown, on another inside move against Mitchell, gave the Packers a 28–10 lead in the third quarter. That one came on a better throw by Starr, but McGee juggled it as he crossed beneath the goalposts, which were on the goalline. “The game of his life,” says Hornung. 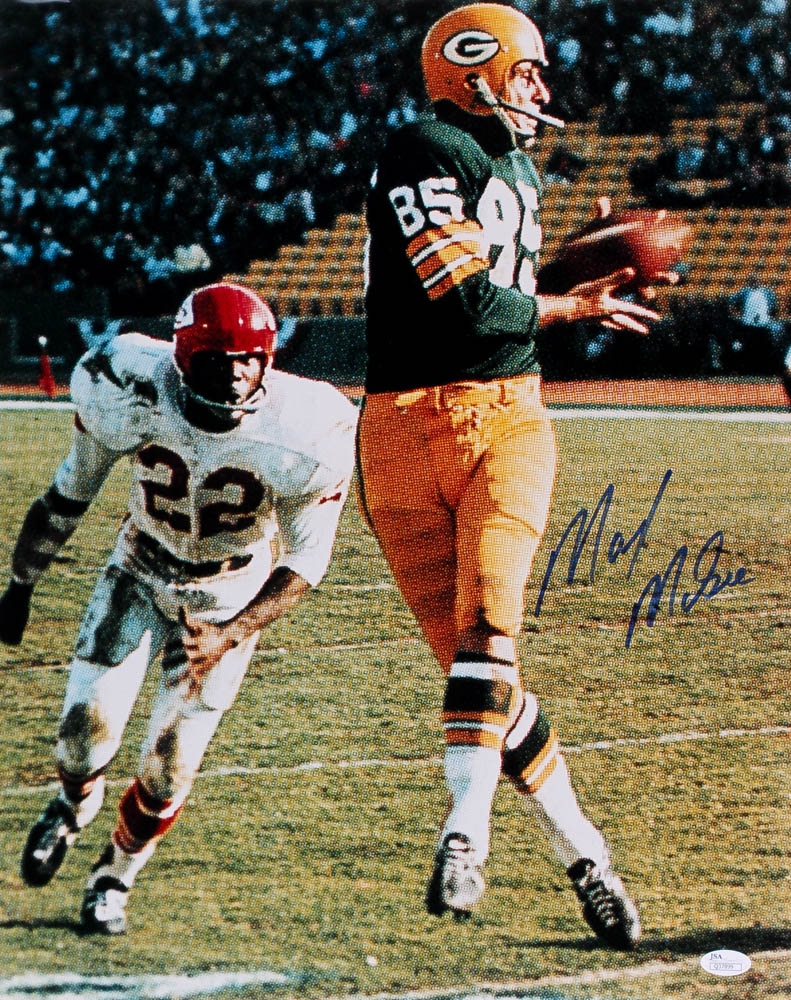 You can also see more video from television programs talking about McGee performance, such as when a TV show ranked the Top 50 Super Bowl Performances, and picked McGee’s Super Bowl I play as #31, and in another show which ranked McGee’s catch #10 among the “Top 10 Super Bowl Plays.”

And while it’s true that I’m a giant Green Bay Packers fan, and they’re the only football team I’ve ever rooted for, I still love this story about how the hungover Max McGee helped them win the first Super Bowl in 1967. 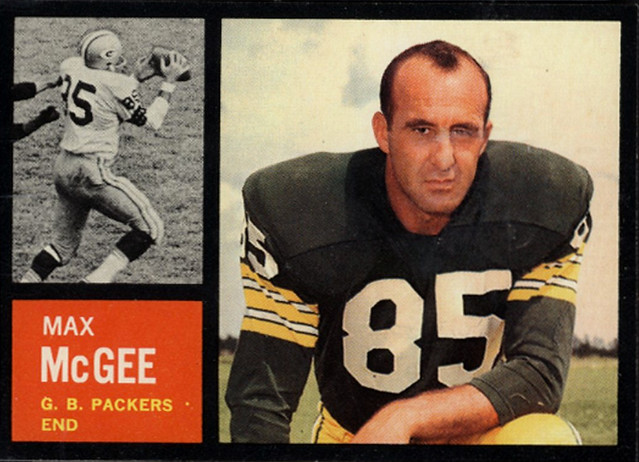