Tuesday I left for a short trip to London along with brewers Shaun O’Sullivan (21st Amendment) and Christian Kazakoff (Triple Rock) and beer fans Motor and Thomas. Because of the time change, our flight was effectively a red eye and we arrived in the U.K. the following morning around seven in the morning. We had no specific plans for the day, apart from some drinking and trying to stay awake as long as possible in order to fight our jet lag. 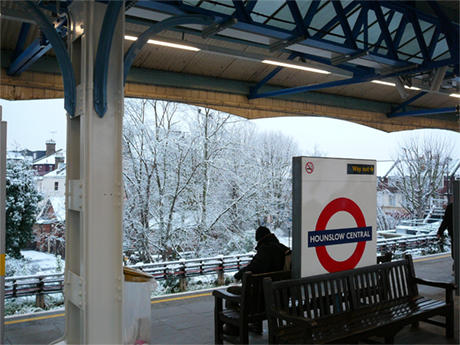 London had received a rare bit of snow and our tube ride in from the airport was a winter wonderland. 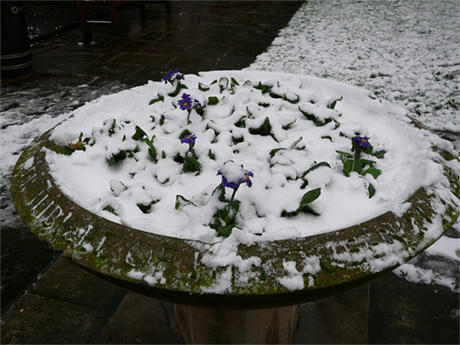 The snow was so unexpected, there were still flowers in the parks. 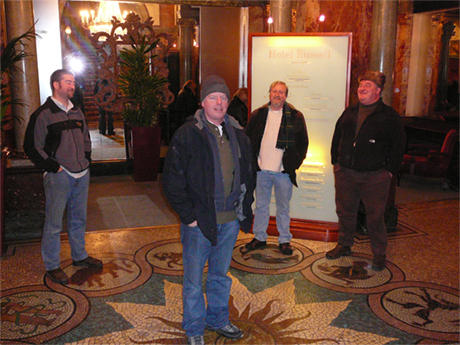 Christian, Shaun, me and Motor in the lobby of our hotel in Russell Square. 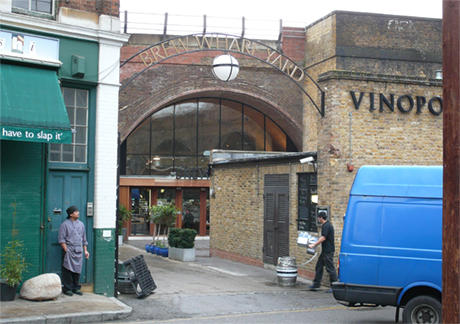 We went for a walk down to the Borough Market and tried a brewpib there, the Brew Wharf Yard. They only had one house beer on, the Wharf Rebel, which was, I’m sorry to say, very dissapointing. But they did have all of the Meantime beers and a good selection of imported Belgian and American beers. 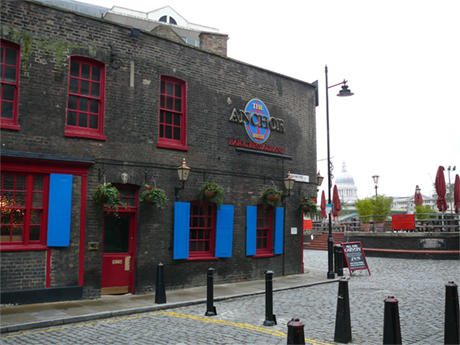 The Anchor pub next to the Thames was a bit of a tourist bar but in a great location and with a decent selection. 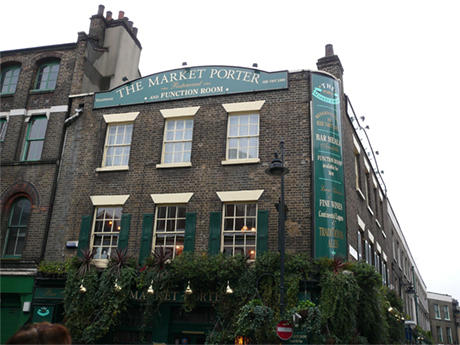 By far the best pub in the area was the Market Porter, which had great atmosphere and an even better beer selection. 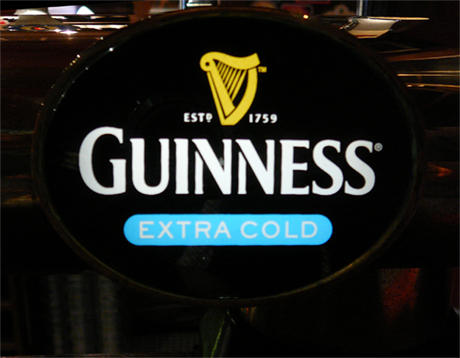 Though ridicuously the Market Porter also carried Guinness Extra Cold, whatever that means. Actually, according to the Guinness website: 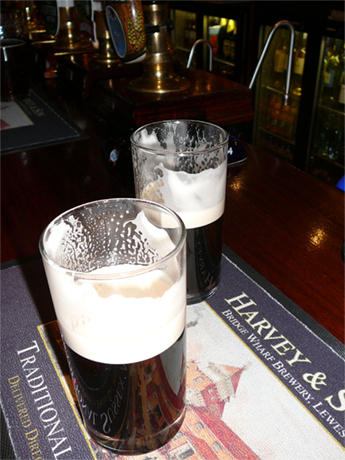 We did our own taste test of Guinness vs. Guinness Extra Cold — GEC is in the foreground. Not surprisingly, there was absolutely no difference. As suspected, it was merely a marketing gimmick. 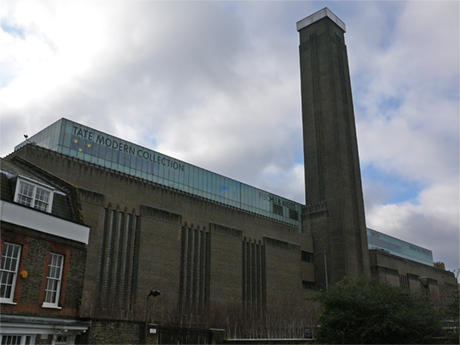 Next, it was off to the Tate Modern, which was only a short walk away. 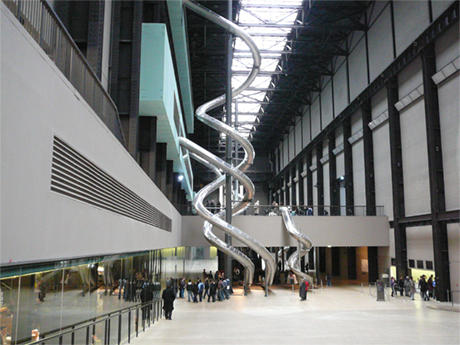 The highlight was probably the The Unilever Series by Carsten Höller. It was a series of amazing slides that you take from the second, third and even the fifth floor. 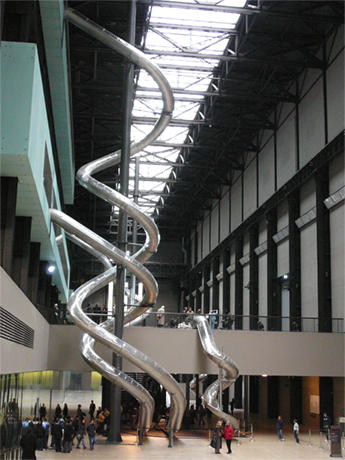 The slides wind around a central pole. 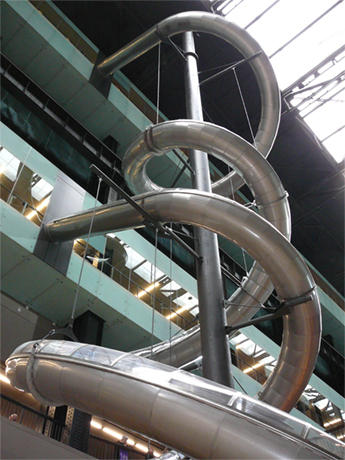 There’s solid on the bottom half but glass on the upper half so you can see where you’re going. 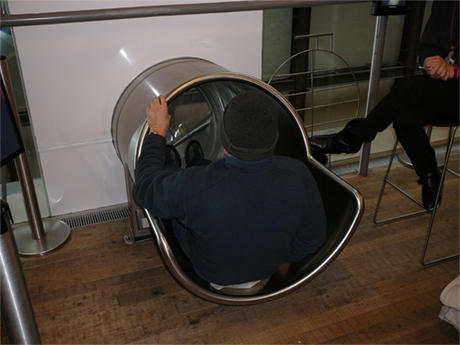 You sit on and put your feet into a canvas towel to ride down the tube. Here Shaun O’Sullivan enters the fifth floor slide. 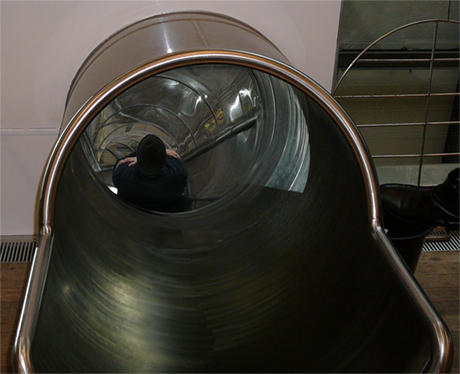 Here Christian Kazakoff somes out at the bottom after his five-story ride. 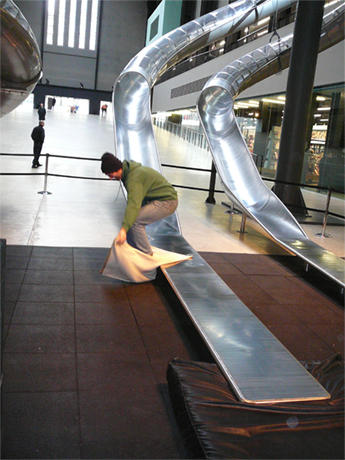 A better look at the canvas towel as Christian dismounts the slide. 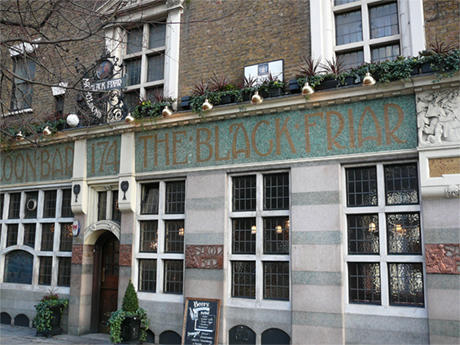 Afterwards, we went to the Blackfriar, an absolutely beautiful pub steeped in ornate details and history. 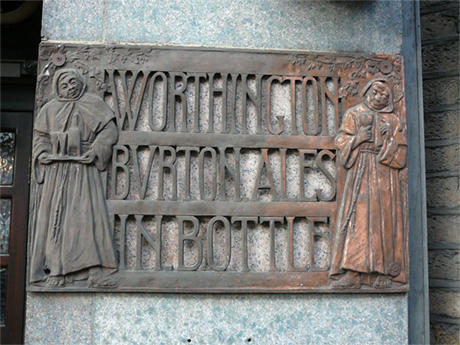 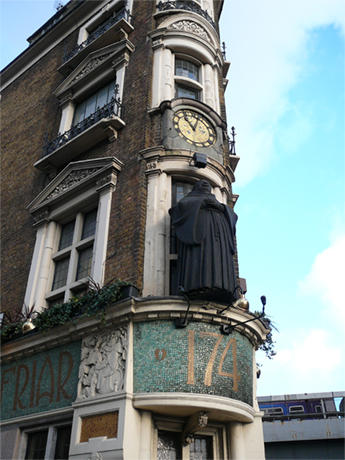 Unfortunately, inside — though also quite ornate and stunningly beautiful — it smelled of sulfur and sewage, as if the pipes had recently backed up. The people inside either didn’t seem to notice or had grown used to it. But none of us could stay inside for very long and so we kept moving. 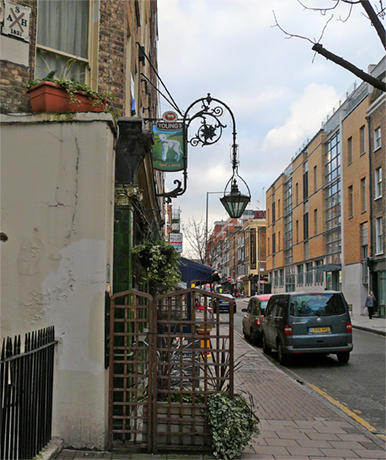 We had a late lunch at the Lamb, near our hotel. The beer was decent, but the food could have been better. Overall, it was a little disappointing to see that most pubs looked great outside and in, but carried a somewhat narrow range of beers that differed only according to what pub company owned them. There were very few true free houses. And while I might argue that their beers, and especially the popular ones, were still real ales and much better overall then the beers that dominate our bars, there was still a lack of diversity found in many average Bay Area bars.