You are here: Home / Beers / Native But Unnatural

Earlier this month, AC Golden Brewing — a wholly-owned subsidiary of MillerCoors — announced their newest project, Colorado Native. AC Golden is essentially just the Coors pilot brewery located inside Coors’ massive brewery complex in Golden, Colorado. Pretending they’re a small, separate, independent company may work on paper, for legal purposes, but I’d like to believe that most people can see through the deception. 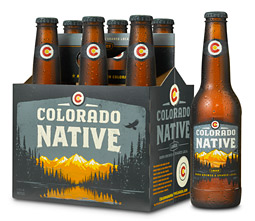 The beer itself is an amber lager, which should at least please Michael Lewis, who at this year’s CBC famously dissed any craft beer that’s not a lager. Still, it’s hard to get worked up about a beer, no matter how well-intentioned, that’s made in the heart of one of the largest single breweries in the world. To me that sends a mixed message at best. The beer may taste fine, and probably does, but it’s not be marketed on taste, it’s being used instead to sell an idea. And that’s where I think it’s doomed to fail. No matter how native Colorado Native is, it still can’t separate itself from the unnaturally large parent company that’s about as un-local as a business can be.

The other odd bit about Colorado Native is that it’s also being promoted using social media, as detailed in Advertising Age. They have a Facebook page and will be using SnapTag technology on its packaging, something other “small” companies like Unilever, Ford and Crayola are also using to reach and data mine customers. In the AdAge piece, here’s how they characterize breweries using social media.

Brewers have typically been slow to move into mobile and social-media channels because of concerns that age verification presents too big a hurdle for consumers to be willing to jump over — Anheuser-Busch InBev’s Michelob is perhaps the only major-brewery owned brand on Twitter, for instance — but that isn’t stopping MillerCoors here.

Huh, how did they miss the literally hundreds of small breweries on Twitter and Facebook, so many it’s a damn phenomenon. Over the past two years, the Craft Brewers Conference has held two panel discussions about the use of social media by breweries, one of which I sat on the panel. And their comment about age verification continues to stick in my craw. Where the hell does it say only adults can TALK or READ about alcohol? Drink, yes, I disagree with that but understand it. That people under 21 aren’t allowed to read about beer on websites is something that makes no earthly sense.

But back to Colorado Native. Using tools that only very large companies can afford doesn’t make them seem particularly small or local, which as far as I can tell is the image they’re trying to project. In the Denver Business Journal, SnapTag’s chief marketing officer Jane McPherson was quoted. “Rather than just looking at the bottle, they [consumers] can have a much fuller brand experience.” I know marketing is important, but really? A “fuller brand experience?” I have no doubt that the brewers tried to create the best-tasting beer they could, but this whole “project” seems more about the image and marketing than the beer. It’s more about trying to fit an identified niche than just creating a beer they like and trying to see if people like it and will buy it, too. It just feels too calculated. And that’s why, to me, it may be a native beer, but it still seems entirely unnatural.