You are here: Home / Beers / Ownership Of Beer Brands & Varieties 2010

A couple of years ago, shortly after Anat Baron released her film Beer Wars, people kept asking her which big beer companies owned which beer brands. In December 2009, she put together a list of Who owns what? That inspired to me took take a closer look myself, and that produced my own list, The Bigs Brewers’ Brands. At the time, I had hoped to keep it current, but that’s proved too time-consuming a task and it hasn’t been updated since December 4, 2009.

Now Philip H. Howard, an assistant professor at Michigan State University, in the Department of Community, Agriculture, Recreation and Resource Studies, has created an infographic on the Concentration in the US Beer Industry. The bubble chart seeks to show the major companies selling beer in the U.S. — domestic and imports — and also uses different lines to show arrangements of distribution and partial ownership, where applicable. 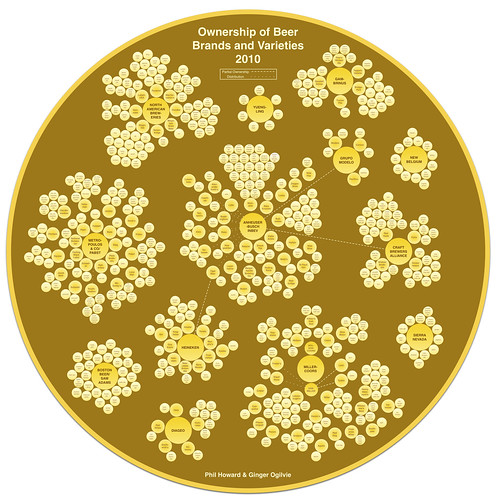 You can see more detail on the full size image, which can be seen here. You can also zoom in using Zoom.It. Howards also notes “that the graphic above focuses on the top 13 firms, and excludes varieties of malt liquor and non-alcoholic beers.”

His write-up also includes the following:

AB InBev owns, co-owns or distributes more than 36 brands, for example, while MillerCoors controls at least 24 more. MillerCoors also brews Metropoulos & Company’s products under contract (thus the company that controls Pabst and 21 other brands is a “virtual” beer company).

In 1959 the 10th largest brewery in the country (Pabst) acquired the 18th largest brewery (Blatz), resulting in a combined national market share of 4.5%. Seven years later the US Supreme Court reversed the merger, noting that:

If not stopped, this decline in the number of separate competitors and this rise in the share of the market controlled by the larger beer manufacturers are bound to lead to greater and greater concentration of the beer industry into fewer and fewer hands. [Justice Hugo Black in U.S. v. PABST BREWING CO., 384 U.S. 546 (1966)]. 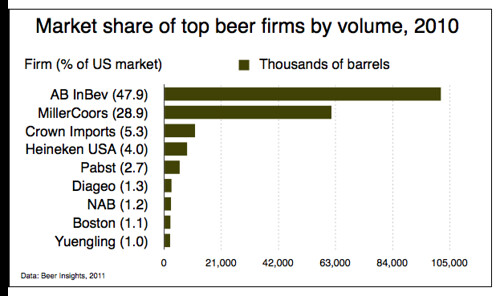 Howard also quotes Stephen G. Hannaford, writing in 2007, in Market Domination!: The Impact of Industry Consolidation on Competition, Innovation and Consumer Choice. “The beer industry is not only dominated by two firms, it is dominated by a small number of varieties — just six account for more than half of all sales. The result is an ‘oligopoly within the oligopoly'” Howard demonstrates this relationship with another chart.

You can also explore this one better by using Zoom.It.