I’m sure like most politicians, the members of the New Hampshire Senate have been called a lot worse, but this morning Alcohol Justice called them “fools” simply for not voting the way they wanted them to, and then somewhat misrepresented the facts. In AJ’s tweet, they claimed “Fools turn blind eye to alcohol-related harm http://bit.ly/1o7BZFN New Hampshire Senate approves booze billboards.” 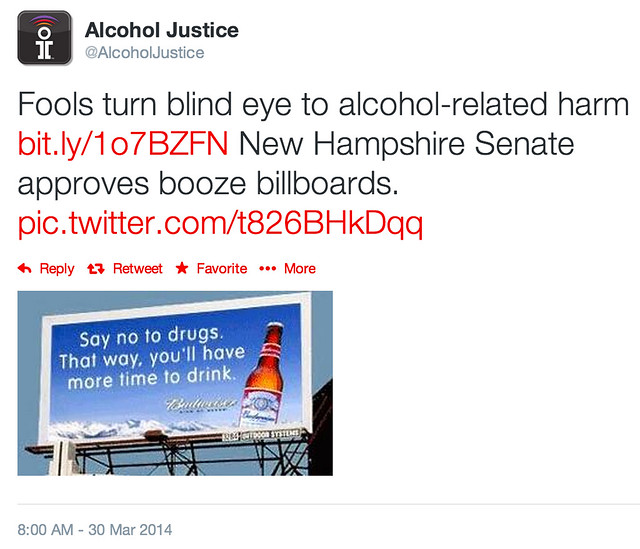 If you’re a regular reader here, you’ll no doubt be unsurprised to learn that the state Senate didn’t exactly turn a blind eye to anything, but vigorously debated whether to allow alcohol companies to advertise on billboards. According to the Telegraph newspaper report, they spent hours discussing the bill.

One senator, David Pierce (D-Hanover), said “it’s clear to him this ban is an unconstitutional restriction on the freedom of speech that would not stand up in court.” In an odd show of seemingly not understanding her job, Senator Jeannie Forrester (R-Meredith), said “that wasn’t a good enough reason to lift the ban.” If being unconstitutional isn’t a good enough reason to change a law, please tell me what might be considered “good enough?”

Senator Donna Soucy (D-Manchester), logically said “critics of this should seek to ban alcohol advertising in newspapers and on radio and television airwaves. The restriction should be across the board and not simply on a board. That’s the distinction,” she said. Which makes sense, if something is legal in other media, it makes no sense that it should be illegal in another. Apparently, only five states currently ban alcohol advertising on billboards.

After a long debate, “[u]ltimately, the Senate passed it 13-11 after Senator Sam Cataldo (R-Farmington), changed his mind and decided to support it.” But with the bill’s passage it doesn’t actually “approve booze billboards,” but fixes an unconstitutional law and will now “permit alcohol makers to apply for” one, or more, of the state’s current highway billboards. They still have to compete against every other business or company who might want their message on one of New Hampshire’s billboards.

But perhaps the most troubling aspect of AJ’s calling the Senate “fools” for doing their job, was the image they sent out with the tweet. 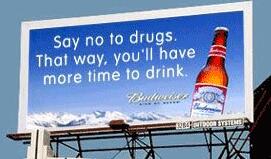 With this picture, they come right up to precipice of opening themselves up to a defamation suit from ABI, because they never come out and say this is a real billboard for Budweiser. It is, however, fairly implicit that that’s their intended meaning. At a minimum, I think most people would do a double take, and wonder if it’s a real ad. And you can be excused for thinking that, because AJ doctored the ad, presumably just for that reason. A Google image search brings up numerous comedy websites that include the image, and for reasons unclear claim it to be Canadian, as you can find the satirical billboard among Freeple’s Canadian Billboards, Jokeroo’s Canadian Billboards, and Izismile’s Brazen Billboards From Canada.

But there’s one critical difference between the image that AJ used in their tweet and every other instance of it that I could find on the internet. And that’s a watermark identifying it as having been created by dribbleglass.com, a humor website billing itself as the “internet’s official humor site.” So in the original image, it’s obviously a work of satire and not meant to be taken seriously. 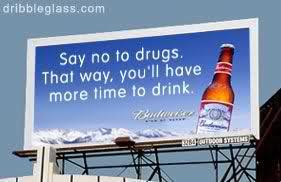 It’s also clear from the original image that AJ simply removed the watermark identifying where it came from, cropping it, and thereby making it appear more like a genuine billboard. And yet they’re the “watchdogs” who claim to be keeping the evil alcohol industry honest. Who exactly are the fools here?