You are here: Home / Just For Fun / Quick! Hurry Up! The Next Session’s Tomorrow! Write… And Make It Good!!

For the 104th Session, our host will be none other than Alan McLeod, who now holds the title for hosting The Session more times than any other human alive today. Alan, of course, writes A Good Beer Blog. For the topic, he’s extending the discussion I started a few weeks ago in The Monthly Session: Should It Continue Or Should We Let It Go? Fifteen people weighed and cast a vote, and the ayes held the day, 10 to 5. So there you have it, we’re still alive, though on life support. Alan, who magnanimously offered to step in this month, did just that, and donning his cape and wearing his matching knickers on the outside, is here to save the day. And he’s not fooling around, writing in his announcement for the October Session, Session 104: Quick! Write… And Make It Good!!, “I am hosting and you bunch of sookie babies are writing blog posts. Got it?” Got it. Read the full monty here:

The first Friday of the month is tomorrow. And no one signed up to host it. So, they called the undertaker. Me. The voice of beer blogging doom. Gloomy dour Cain to all you cheery half-lit passion-wracked Abels. See, Jay got the shakes mid-September. Got them bad. He struck by a bought of existential angst about where things were going. I understand that’s fairly common after a big batch of beer judging gigs. Bear with me. Jay gets a bit verklempt:

… I fear we may have hit a wall. With just two weeks to go before Session #105 is scheduled to take place, we have no host and no prospects for one, or so it seems. I could start asking previous hosts to step up — and perhaps I should — but that also seems a little contrary to the spirit of it being organic, something that just chugs along all by itself. I could also start begging and cajoling bloggers who have never hosted, but then again I don’t want anyone to feel obligated. It’s supposed to be fun, otherwise it won’t work. Which brings me to the elephant in the ether.

Poor lad. He’s clearly schwazzled. It’s only Session #104 for one thing. I hear Stan’s no better. He’s in a ball in the corner of the rec room now, sobbing… comforted with only the thought of upcoming affordable local post-season baseball and enough freebie liquor samples in the basement to calm the Soviet army after their victory at Stalingrad. These guys have been giving and giving and giving and what the hell do you losers do? You let them down. You heartless bastards.

So, time to suck it up. I am hosting and you bunch of sookie babies are writing blog posts. Got it? I was going to tell you to write anything you feel like whether it makes any sense or not… but then I realized that’s what you do anyway. Especially you. Yes, you!! So you are going to write about this: if we just “take the philosophical approach, that the Session has run its course” aren’t we really admitting that beer blogging is a massive failure? I say no. I say this is a fabulous way to cover up problem drinking with anti-social internet addictions. Maybe you know of another reason we should keep writing and try to make some sense of the beer and brewing world. Well, goodie for you. Write about it. Explain yourself. Because if you can’t you are really admitting (i) you’ve wasted the best part of the last decade or (ii) you live in a fantasy world where think you are a beer writer and not a beer blogger and that’s soooooo much more important… as if your friends don’t share concerned messages about you behind your back:

Linda? It’s Barry. Yes, I saw him. He still pretends he writes about alcohol as a job… she’s the strong one… poor things… where will it end?

Make it good. Leave a link in the comments when you do. 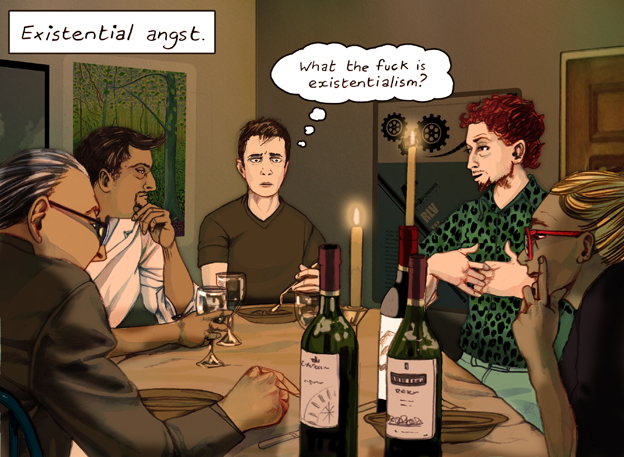 So start listening to your existential angst now. What is it telling you? There’s isn’t much time. Just a few hours. So let us know. To participate in the October Session, leave a comment to the original announcement, on Friday, October 2.