It’s been exactly a year now since Here’s to Beer debuted at last year’s Super Bowl. But this year there wasn’t even a whisper about the beer advocacy campaign and a quick survey of the website reveals that news there hasn’t been updated since September of last year and the most recent industry news is from last July. Now that Bob Lachky has been promoted onto greener pastures (he became chief creative officer in October) it doesn’t seem like A-B’s attempt to promote beer is really going anywhere.

I met with Bob Lachky at an A-B reception held in conjunction with GABF last September. He was quite gracious, even about all of the criticism about Here’s to Beer from me and others. He spoke with great enthusiasm about the project and indeed seemed quite sincere. But he also was so polished and well-spoken that he seemed a bit like a politician. That’s not necessarily a criticism but it made what he was saying lack spontanity and you couldn’t help but think he’d given this speech before, and probably over and over again. But, of course, you don’t rise quickly in a large corporation without learning a few things about how to present yourself, and I suspect that’s the reason Bob Lachky is where he is today.

But the week following GABF, Augie IV had a new job for Lachky and I’ve heard nary a thing about Here’s to Beer since. Nor has there been any news about the documentary film they are supposedly sponsoring, American Brew, by Roger Sherman. Sherman’s Florentine Films website still lists the film as “in production,” but they were showing a healthy, polished looking percentage of the film as a teaser at GABF back in September. The point is, with Lachky gone I suspect the enthusiasm for the Here’s to Beer idea has likely faded, too. A-B is no longer feeling as threatened as they did in late 2005, which is what led to them starting Here’s to Beer in the first place.

I continue to think an advocacy campaign to educate and promote good beer generally is a terrific idea, but A-B was never the right company to take on such a task. Perhaps the Brewers Association or the even the Beer Institute could take it over and do something with it. Until then, we’ll just have to continue promoting beer in the same we have been for years and years; one drink at a time, one person at a time. 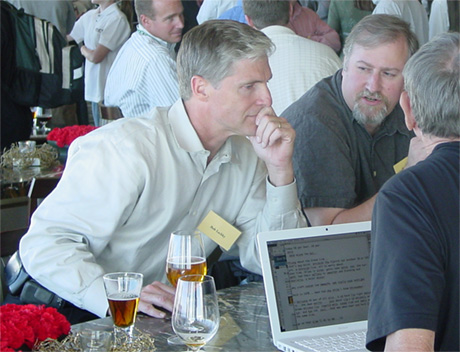 Bob Lachky, me and Bill Brand at the GABF reception given by A-B.