This is remarkably the 106th Session and for the magic third time (3 is a “magic number” for those of you remember Schoolhouse Rock) I’ll be your gracious host. For my topic, I’ve chosen Holiday Beers.

Of all of the seasonal beers, the Solstice/Christmas/Hanukkah/Kwanza/Mithra time of the year is my mostest favorite. A few weeks ago, we had our fifteenth annual holiday beer tasting for the Celebrator Beer News, and sampled 42 of this year’s Christmas beers. Each year, in the introduction of the tasting notes for the holiday tasting, I include the following description:

Holiday beers are by design no one style, but are a chance for individual breweries to let their talent and imagination run wild. At the holidays, when people stop their busy lives and share some precious time with family and friends, the beer they choose should be equally as special as the time they’re sharing. So a holiday beer should be made to impress, to wow its audience, to stand out. That’s the only criteria that should be met by one of these beers. Will it impress? Different breweries, thankfully, do this in many, many different ways. Some use unusual spices or fruits, some use special malts or hops, some use other uncommon ingredients like spruce or rye, and some make a style that itself is unusual. So there’s nothing to tie these beers together apart from their celebration of the season. That makes it both a delight and a challenge to judge. Ultimately, perhaps more than any other tasting, these beers are simply a matter of what you like and our judging is a matter of what we like. So try them and discover for yourself the many flavors of this holiday season.

So for this Session, I asked people to write about whatever made you happy, so long as it involved holiday beers, offering the following suggestions, but (hopefully) making it clear they should celebrate the holiday beers in your own way.

As for me, winter seasonals are by far my favorites of the beer year. I’m not entirely sure why, other than I think they’re not as defined by the season itself. Apart from often being spicy, and perhaps heavier both in mouthfeel and strength (thanks to the cooler weather), they’re not as defined by the weather outside as the other seasons. Spring and Summer seasonals are generally lighter to take advantage of the warmer, often hotter, weather. You rarely see a summer barley wine. Fall seasonals are more marzen-like, just slightly darker than summer fare, or have pumpkin aromas and flavor … not that there’s anything wrong with that.

Also, more than the other seasons, winter beers are often meant as gifts, or are taken to parties as something to offer the host and thank them for putting on the festivities. I suppose one might bring a summer wheat to a backyard barbecue, but I would still argue it’s the holidays when that is at its most prevalent.

The range of tastes, additives of fruit, spices, and other flavorings is also unparalleled compared to the other seasons’ beers. I’m particularly fond of Unibroue’s Quelque Chose, one of the few beers that’s served heated, mulled really. You’d never find that beer at an Independence Day picnic on a sweltering hot July day. Sadly, it’s not currently in production.

I really like spice beers, too, although I know I’m in the minority on that one. I loved the period of time when Anchor’s Our Special Ale was really spicy, though they’ve dialed it back quite a bit nowadays. Another beer that wasn’t being brewed for a long time was Pike Auld Acquaintance , which I recall being way spicier than its current version which returned after the Finkel’s bought back the brewery. It used to be one of annual favorites.

I’m somewhat surprised by many winter seasonals that don’t seem to do very much to really stand out as a winter seasonal. Way too many just seem to be another hoppy beer or an IPA, while still others are just something relatively bland or unexciting. I don’t want to name names, but they’re fairly easy to spot.

To my way of thinking, a holiday beer is a chance for the brewer to let his freak flag fly, to go nuts, to make something designed to impress. A Christmas beer should make me want to get dressed up, go out in a snowstorm to have some beers on a tray with my equally dapper friends. I’m not doing that for your weak ass lager or ale that’s no different from anything you make the rest of the year. I want your best, your wackiest and the most flavorful concoction you can muster. Even the arguably best mistake ever made — Lagunitas Brown Shugga’ — is better than many winter seasonals made on purpose. If I can’t give it to a beer-loving friend and have them say something like “wow, thanks; I can’t wait to try this beer” then you’ve failed. 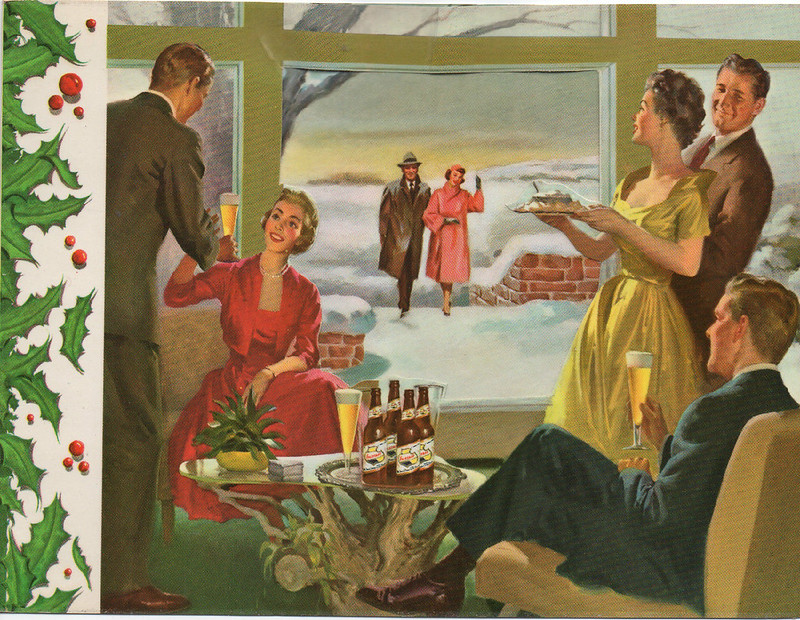 I just really like the concept of “seasonal,” and not only with beer. Seasonal foods are awesome, too. I hate that we have produce flown in from around the world so we don’t have to do with some fruit or vegetable when it’s out of season in our part of the world. We lose its sense of being special. We no longer appreciate it when it is around, knowing it will only be here for a short window of time. If people know they can get it any time they want, then it’s no longer as fascinating or desirable, at least in my opinion.

To me, a good beery illustration of this is the strong beer made by Mendocino Brewing, Eye of the Hawk. When it was around for just a short time, made only twice a year, I think in the spring and fall, it would sell like hotcakes, because people knew it would be available for just a short time. When they decided to make it a year-round beer, its sales flattened considerably. It was no longer special. There was no longer any motivation to pick it up as soon as you saw it, if you knew it would be there all year long.

And while that’s true of all the seasonals, it’s the holiday ones that really ring my bell and get me really excited. There are plenty of great Spring, Summer and Fall seasonal beers, to be sure, but for some reason I’m never quite as excited about them as the winter ones. Unfortunately (or fortunately), I think they’re all here to stay, with the seasonal category being the second most popular in traditional outlets, beat only by IPAs. People love variety, and seasonals certainly provide a great rotating opportunity to continually try new things.