You are here: Home / Editorial / Session #119: The Discomfort Of Burning Mouth Beer

For our 119th Session, our host is Alec Latham, who writes Mostly About Beer …. For his topic, he’s chosen Discomfort Beer, by which he means a beer which initially tasted funny, or odd, or off, or something, but which later became a favorite. Or maybe it didn’t. I’m not sure if I’m explaining that very well, so I’ll just let Alec take over and describe what he means:

What was your first ever taste of beer like? For me, it was like chilled copper coins mixed with tonic water and was disgusting. This is a process us committed beer drinkers can revisit every time we try something new.

A few years ago, I visited a pub in Pimlico called the Cask and Kitchen. There was a beer called Wild Raven by Thornbridge Brewery. Making assumptions based on the title, I ordered a pint as I love stout. I remember opening the sluices and then seizing up. Something wasn’t right. It had the chocolatey flavour of a stout but there was an intruder – lemon rind hissed in my nostrils and tainted my palate. Citrus grappled with the roast malt. Was it supposed to taste like this? Was it infection? Detergent? I spent some time staring at the floor in a suspended double-take.

That was my first ever Black IPA and at the time I wasn’t sure. Initially, I didn’t like it but whilst deciding whether or not to return it to the bar I kept giving it the benefit of the doubt. The dislike diminished. The acceptance grew. The pint gradually drained.

Black IPA is now one of my favourite styles but it could have gone the other way.

And does a Black IPA still get me blinking at the floor in a state of disquiet? No. Neither does the astringent character of Brett nor the dry bite of Lambic. All styles have been comprehensively “locked in”. Ultimately, familiarity devours discomfort.

For Session 119 I’d like you to write about which/what kind of beers took you out of your comfort zones. Beers you weren’t sure whether you didn’t like, or whether you just needed to adjust to. Also, this can’t include beers that were compromised, defective, flat, off etc because this is about deliberate styles. It would be interesting to see if these experiences are similar in different countries.

I think this could be a good archive for people researching fads, the origins of styles and the dearths of others – but especially how new ones were initially perceived.

Over the past year I’ve had a black barley wine, a braggot, a rye wine, a seaweed and cloudberry Gose, a beer made with Saki yeast and several made with Champagne yeast. I’ve sipped stout with Tonka beans, drank mulled lager and many tea beers – some with the tea complementing the hops – others completely replacing them. This has also been a year where 9 ABV hop-forward beers have become standard (from the UK perspective).

Some of the above I loved, others I liked and some I hated. What remains to be seen is which will catch on and which are just brief social media cameos.

The beer that brings me the most discomfort I first tried in the mid-1990s. It was Ed’s Cave Creek Chili. Every bottle has a whole chili pepper inside of it. Why? Besides being novel, and eye-catching, some people — many people — like hot and spicy food. I am not one of those people, which immediately puts me at a disadvantage. It came across my desk as the chain beer buyer for Beverages & more. And so I tried it, and instantly regretted it. And still do to this day. Besides the pain of the barrage of hot and spicy flavors, these beers completely ruin me for any other beer I might want to drink, or really anything I might to eat too. Basically, it makes me unable to taste anything else for a period of time, and not just a few seconds; more like minutes, sometimes well over an hour. 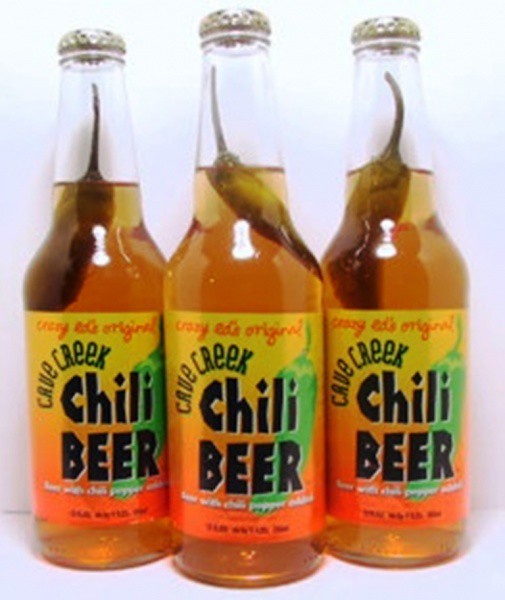 Of course, we brought it in. Just because I don’t like something shouldn’t mean others wouldn’t want to try it. And there was some obvious appeal for people who like that sort of thing, and it sold reasonably well, probably to just the sort of person who loves four-alarm (or is it five-alarm now?) chili or ghost peppers. People who must go to the extremes, who never met a challenge they wouldn’t try.

The beer is still around, though it’s now called Cave Creek Chili Beer, and is brewed in Mexico. As far as I know, it was the first modern chili beer. It was certainly the first one I ever tried. And they appear to even be growing in popularity. Chili Beer was in a subgroup for GABF and World Beer Cup judging, but recently were broken out into their own category. That only happens if they’re getting a growing number of entries each year. I always bow out of judging that category.

To be fair, I don’t like hot or spices in anything, food or liquid. I am unabashedly a spice wuss. I grew up in rural Amish country Pennsylvania, and like to joke that my family only used two spices: salt and lard. But that’s not far off, as most of the dishes I remember eating were fairly bland; corn pie, meatloaf, casseroles, stews, potato soup, stuff with very few spices. Maybe it was just my Mom, but most of her recipes came from other family members, so I don’t think so. Anyway, to this day I don’t even eat mustard or mayonnaise, no pepper, never touch any Indian food, and will eat only the plainest Mexican fare. After over twenty years, my wife will still hand me something, saying it’s not too hot, and I’ll gag from the spiciness. Of course, this usually makes her laugh, so maybe she’s been doing it on purpose all this time.

But that aside, I don’t think that beer should compete with my food, or even my tongue, for attention. It can wash down and compliment or even contrast my food, but if it renders me unable to taste the next bite, then to my way of thinking it’s not doing its job. It should also be pleasant and ultimately enjoyable. And burning the inside of my mouth has never accomplished that, even though I realize that is actually a goal for some people.

But using any more than the barest amount of chili peppers usually results in it overpowering whatever the base style of beer is, effectively removing its beeriness. I have the same issue with many barrel-aged beers, when they take on so much of the barrel character, or whatever had been in the barrel previously, that its essence is gone, having lost its beeriness in the process. If I want bourbon, I’ll just drink bourbon. In any flavored beer, the adjunct or wood should add to the beer, but not mask, remove or overpower its essential beeriness, otherwise it becomes something else entirely. And for almost every chili pepper beer that’s what happens. I have had one or two examples where it was subtle enough that it did just add to the flavors and not overwhelm your senses, but that’s rare enough that it’s an exception rather than a degree of that type of beer. The majority, I feel, want to hurt me, and wear that goal like a badge of honor, daring me to try it. I don’t think of drinking beer as an endurance test, something to make it through, or a challenge to meet.

So unlike Alec’s experience with Black IPAs, or many people, including myself, warming to a new type of beer, chili beer seems like a love it or hate it kind of beer, with little ground in the middle. And you won’t be surprised to learn I hate them. How could there be any middle ground? Maybe your tolerance for spiciness increases over time, but that has not been my personal experience. My wife has been trying for over twenty years, as did many girlfriends before that. And while I do, believe it or not, eat many more foods today than I did when I was a child and in the intervening years, many people are still shocked at how picky I am and usually chuckle at what I consider to be too spicy. C’est la vie.

So maybe I could, through a concerted effort, patent sampling, building up a tolerance over time, learn to better appreciate chili beers. Then what? They’d still be too much for everyday consumption. I can’t imagine a scenario or situation where that’s a beer I’d ever reach for willingly. What occasion would be appropriate to drink something that will burn my mouth and cause me to be unable to taste anything else? Maybe it’s pure hedonism on my part, but I don’t want to have to work at enjoying a beer. A good beer should, at the very least, just be enjoyable on its own, part and parcel of its beeriness. That is, and rightly should be what beeriness means: something delicious that you want to drink, and is enjoyable during and afterwards, or something that does not cause any discomfort. 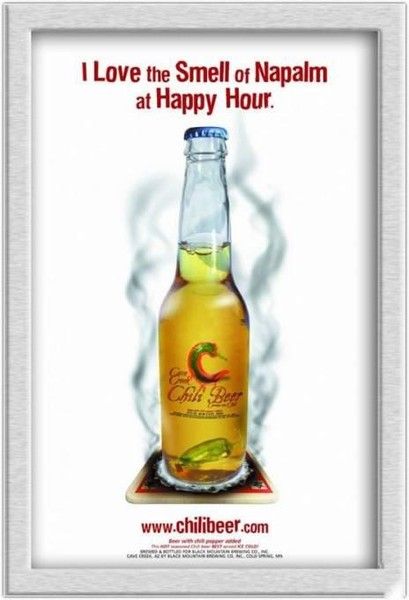