Today is the birthday of Alonzo Gilford Van Nostrand (July 4, 1854-November 5, 1923). He was born in Brooklyn, New York. His father, William Tredwell Van Nostrand bought the Bunker Hill Breweries, which had been founded in 1821, and in 1878, Alonzo Gilford became a partner and took over the brewery from his father. It was originally known as the John Cooper & Thomas Gould Brewery, and Crystal Lake Brewery, but Alonzo’s father renamed it the Wm. T. Van Nostrand & Co. Brewery in 1877, though they used the trade name Bunker Hill Breweries Brewery from 1890 on. It remained open until prohibition, but reopened briefly after repeal as the Van Nostrand Brewing Co., but lasted less than a year, closing in 1934. 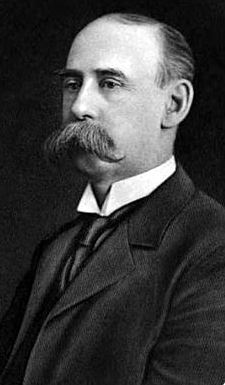 Some records say he was born on Jul 3rd 1854, but on a passport application Alonzo himself says he was born on July 4th 1854 in New York. He graduated from the English High School of Boston, Mass. From 1872 to 1875 he was employed in his father’s brewery and was admitted as a partner in 1878. Following his father, he was the proprietor of the very famous Bunker Hill Breweries of Charlestown (Boston), Massachusetts, which was in business in Massachusetts from 1821 until prohibition. The plural “Breweries” does not indicate locations in different towns, but rather was used because there were two facilities in Charlestown which made beer (using bottom fermenting yeast) and ale (using top fermenting yeast). in 1879 Alonzo originated the “P & B” (Purest & Best) Trademark for his ale. He started bottling ale in the English fashion to compete with Bass. At the time, “P&B ale had a reputation second to none and was the only malt liquor used in the Massachusetts General and City Hospitals and others for the sick and convalescent.” Before closing, Bunker Hill was undoubtedly the most prolific advertiser among the Boston area breweries. Brands included Boston Club Lager, Bunker Hill Lager, Old Musty Ale, Owl Musty, Van Nostrand’s Porter, and P.B. (Purest Best) Ale, Bock, Lager, Porter, Stock Ale, and Stout. PB Ale reappeared briefly after prohibition circa 1933 or 1934, as shown on post prohibition items including a tin over cardboard sign and 2 different labels from the Feigenspan Brewery of Newark New Jersey and a label from the Dobler Brewery of Albany New York. Alonzo died in the Vanderbilt Hotel, Park Avenue and 34th Street, Manhattan, New York. He was a member of the Boston Chamber of Commerce, the Ancient and Honorable Artillery Company and the Bostonian Society. He traveled extensively, and in 1907 made a trip around the world. He was a member of the Merchants Club, the Boston City Club, the Eastern Yacht Club, the City Club of New York, the Beverly Yacht Club, the Sphinx Club and various other clubs and societies. 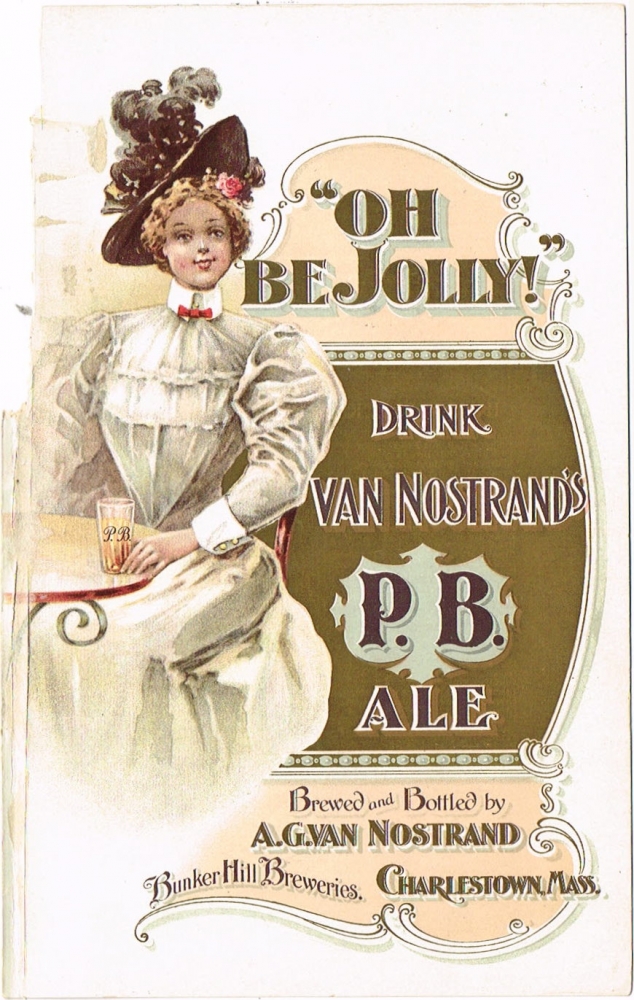 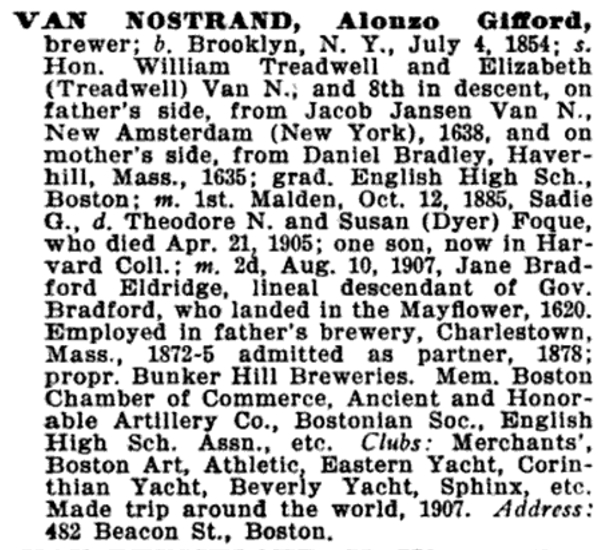 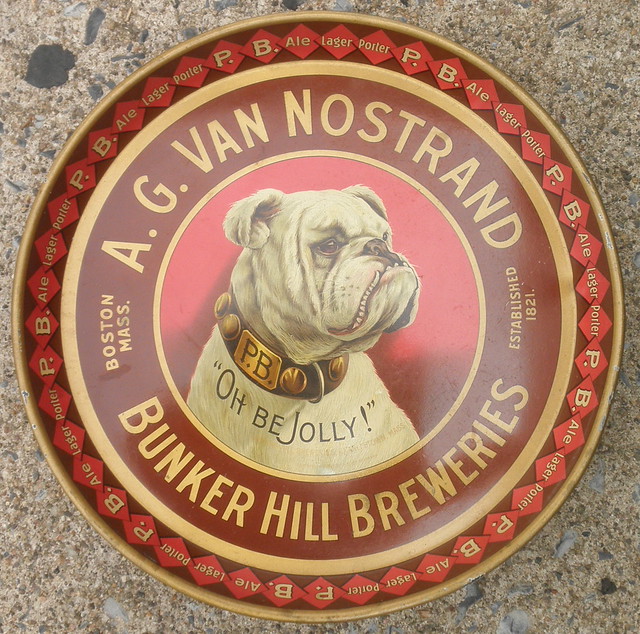 This account of Van Nostrand is from “Herringshaw’s American Blue-book of Biography: Prominent Americans of 1919:” 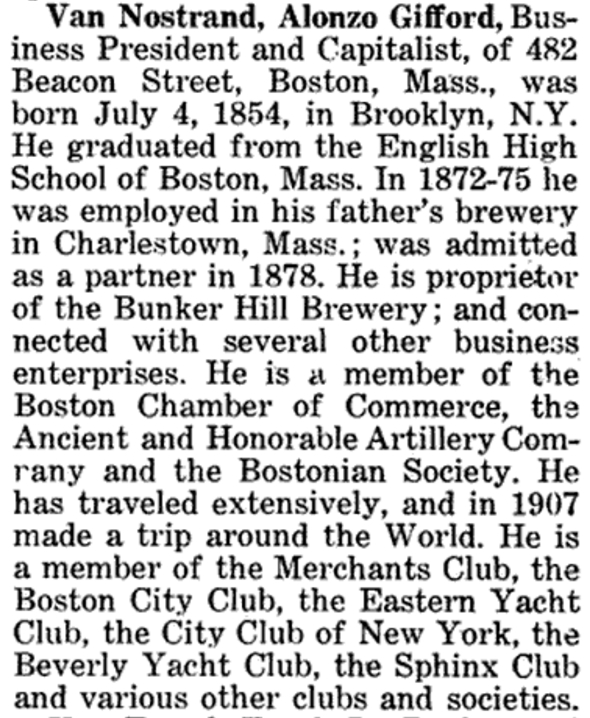 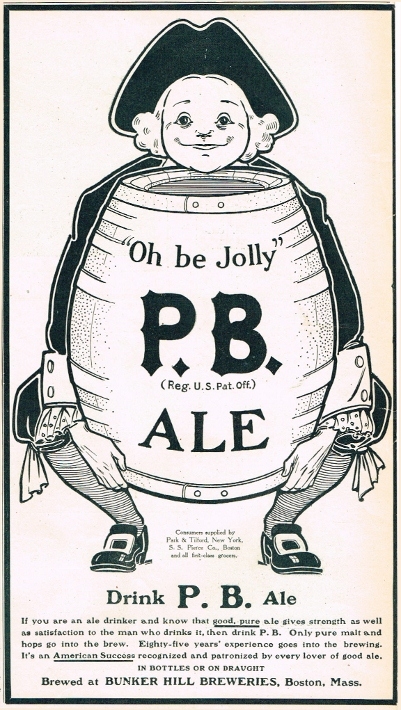 And this is a history of the Bunker Hills Breweries from “100 Years of Brewing History:” 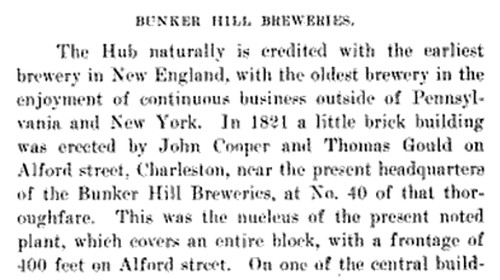 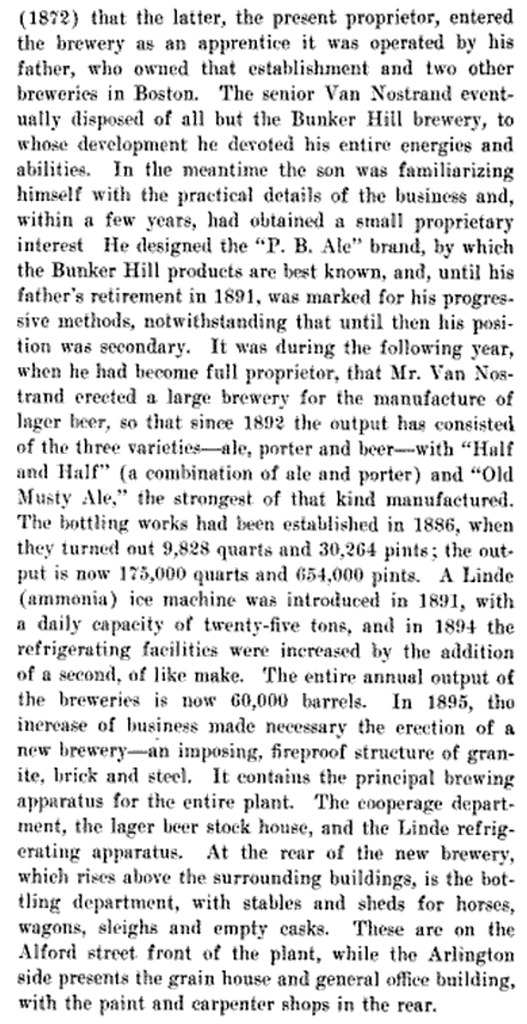 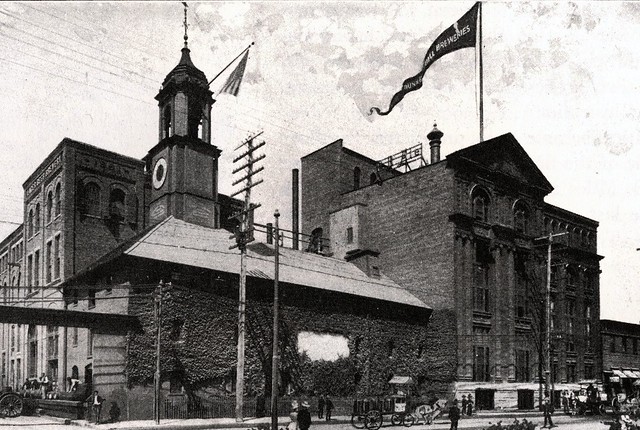 This biography is from the breweriana website, Rick’s Bottle Room:

Dutch forbears, can turn to the maternal line and trace his ancestry from those who settled in New England, who suffered the deprivations of the early colonists, who participated in the wars with the Indians and French and finally in the Revolution, and who helped to make this part of the United States what it is to-day. Mr. Van Nostrand’s mother’s maiden name was Mehetabel Bradlee. She is the daughter of Thomas and Ann (Howard) Bradlee, and was born in the old house at the corner of Tremont and Hollis Streets in Boston, from which her grandfather and other patriots disguised as Indians sallied forth as members of the Boston Tea Party in 1773. Her ancestor in direct line was Daniel Bradley, who came from London in 1635 in the ship Elizabeth, settling in Haverhill, Massachusetts, where he was killed in the Indian Massacre of August 13, 1689.

Alonzo G. Van Nostrand was born July 4, 1854. He was not quite eighteen years of age when, graduating from the English High School, he was given a clerkship in the small brewery on Alford Street. During the three years following he worked his way through every department, gaining a comprehensive and practical knowledge of the business and its possibilities. In 1875 he was taken into partnership by his father. Thereafter the development of the plant and the business was steady and significant. It was in 1875 that the P. B. trademark was originated and adopted. A bottling building was erected, with a storage capacity of 240,000 bottles. In 1891 the brewing of Bunker Hill Lager was begun in a new brewery. Later another brew house was completed at a cost of $100,000 to meet the increasing demand. At the present time the breweries cover an entire block of four acres and there is no room for further expansion, except by increasing the height of buildings. Mr. Van Nostrand made a trip around the world in 1907. He is married and has one son now in Harvard College. Mrs. Van Nostrand’s maiden name was Jane Bradford Eldridge. She is a daughter of Captain Eldridge, of Fairhaven, and is a lineal descendant of Governor Bradford, of the Plymouth Colony, who landed from the Mayflower in 1620. Mr. and Mrs. Van Nostrand occupy the Van Nostrand residence at 482 Beacon Street. Mr. Van Nostrand holds membership in a score or more of clubs and associations, including art and historical societies in Boston and New York, and is a member of the leading yacht clubs.

He considers that the best advice that he can offer to young men just starting in life can be tersely stated as follows:

“Be honest, and particularly with yourself. Concentrate your efforts on one thing at a time. Undertake only what you believe you can accomplish, but when once started, never give up.”

Mr. Van Nostrand has developed a group of splendid, modern brewery buildings, each equipped for a special purpose, but those buildings would be useless, that equipment would rust in idleness, were it not for the fact that, in the midst of intense competition and in resistance of the constant temptation to consolidate forces and reduce standards, he has chosen his own path, has sought to produce, without regard to cost, malt beverages that will surpass any of domestic brewing and will compare with the best of Europe, and has made the P. B. Brewery the standard by which all others in New England are gaged, or seek to be gaged, in public estimate. And that takes us back to the original point that pride of ancestry is a good thing and that business ability is better; but that, when pride of ancestry and superlative business ability are blended and aged in the vat of commercial experience, the output is inevitably as good as can be asked for, the best that can be obtained. 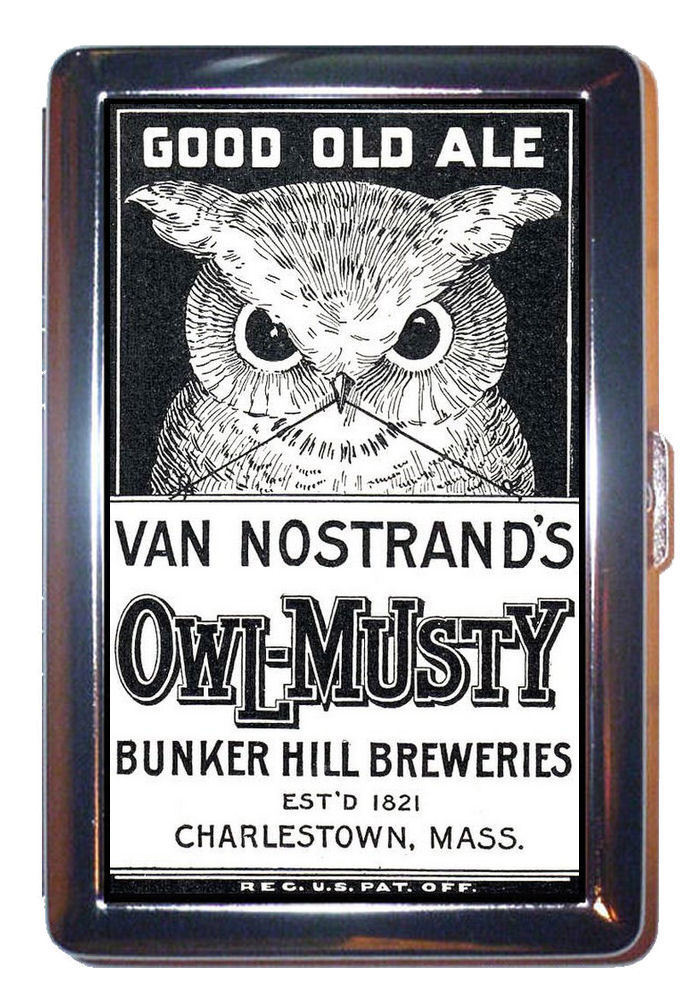 Without a doubt, this is one of my favorite old beer names: “Owl-Musty Good Old Ale.” What a crazy name. Who would want something “owl-musty?” But it was obviously popular, so who knows? 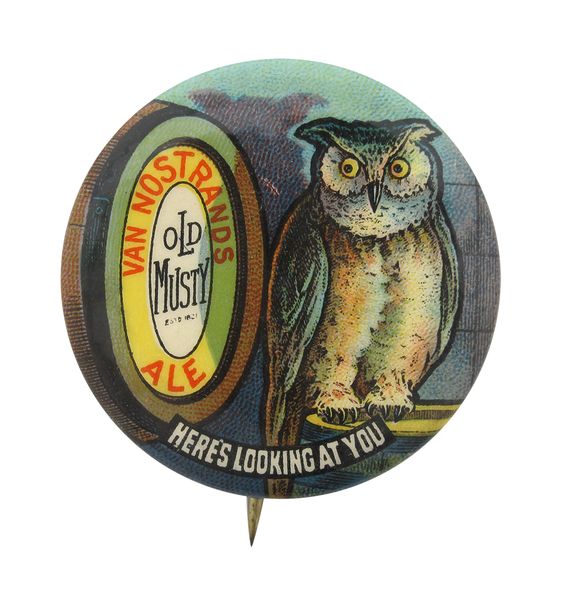