Our 34th Session is hosted by Two Parts Rye, a quartet of bloggers in Ohio. Their topic is bringing us home, so to speak, with the provocatively titled Stumbling Home. Blog host Jim explains:

It’s time to give a shout out to your favorite watering hole. How good are the beers? Any interesting cast of characters? What are your drinking buddies like? They probably need to be embarrassed on the internet. Now’s the time.

You don’t have to limit yourself to one. Feel free to reminisce about the good old days if you like. Maybe you are a shut-in like this guy, and don’t get out that much, talk about the home bar.

There is a catch. This booze stuff has interesting side effects. That means, you can’t get behind the wheel. You gotta walk, take public transportation, or be a regular supporter of your favorite taxi company. Bicycles are acceptable but you still need to be careful.

While I’m not exactly a shut-in, having kids makes going out to bars just for the heck of it a pretty tough proposition. I don’t mind taking them, or them being in bars — I grew up going to bars with my parents — but they’re not that keen and it rarely fits with other stiff they have going on, doing homework, etc. Most of my bar visits have a specific purpose, for work, a tasting, an event of some kind. As a result, I don’t have a local, sadly. There’s really only two bars in walking distance from the one-horse town we live in. That’s the suburbs for you.

So instead I’ll go back to the beginning. The first “local” I ever had was as an 18-year old stationed in Virginia shortly after I joined the Army after high school. I played in a military band and every musician in the Army, Navy and Marine Corps all had to attend a six-month music school near Norfolk. For reasons that pass understanding the locals hated the military and would literally harass and insult anyone with a crewcut. I still chuckle whenever I hear people talk about how universal the support for our military is. Not in Little Creek, Virginia in the late 1970s. But here’s the upside. There was a bar on base, crazily named the El Crocadrillo. The selection sucked, but the prices were like happy hour or lower all the time. We could be found there most evenings and stumbling home to our barracks later each night. Good times, sort of.

Afterward, I was stationed in New York City for the remainder of my tour of duty, playing with the 26th Army Band. Every bar in five boroughs was accessible by boat, bus or subway train. That was great. We spent a lot of our time in jazz clubs, from obscure hidden lofts you had to know the right people to find to the Village Vanguard. That’s where my love of better beer began. But as for stumbling home, the whole city was in range. Navigating the New York subway system took a certain skill after an evening of drinking and listening to music, but once you learned to get around, a whole new world opened up. 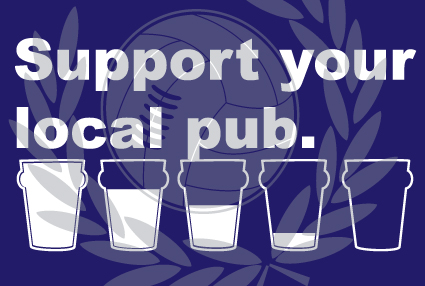 The closest I ever came to a “Cheers” type of environment was the Britannia Arms in Cupertino. The first decade I was in California, I lived in the South Bay, first Santa Clara, then Sunnyvale, San Jose, Cupertino then San Jose again before moving to Oakland when my wife started law school at Berkeley’s Boalt Hall right after we married. But before we met, the gang of friends I hung out with would go to the Britannia Arms usually two or three times a week and at a minimum every Tuesday for quiz night. For several years we had a team — Abbey Something (a reference to “Young Frankenstein”) — and they had “seasons” for the quiz which encouraged us not to miss a quiz night. We got to know a lot of the other regular quiz folks and I’m still very good friends with one of the regular musicians we met there, and he even played at our wedding. They also had good pub food, a good selection of imports and even a few of those then new-fangled micros. I got to know the ex-pat British owners, Tom and Sue, fairly well. When I published my first book, “The Bars of Santa Clara County, A Beer Drinker’s Guide to Silicon Valley,” we had the launch party at the Britannia Arms. I miss the routine of having a local, a default place to go.

When I read about the English pub scene, plus the times I’ve experienced it, I feel sorry that here in the states we don’t really have any equivalent. Taverns historically used to be common meeting places, but Prohibition killed them off. As far as I know, they didn’t have that family friendly atmosphere that springs to mind when I think of the British pub. I’m sure a lot of that is idealized and isn’t like it’s portrayed in the countless British television programs I grew up watching or even like the American show “Cheers,” either. But the English pub is always portrayed as being family friendly, and that’s how I think bars really should be; bright, cheery places where you can get good beer, a hot meal, with music to listen to, books and magazines to read, and games to play. Fun for the whole family. It’s the rare bar in America that can boast such atmosphere, and most of the ones I know are imitations of British pubs transplanted over here. I get dirty looks when the kids come with me to a bar. That’s because of how drinking is demonized here, but I loved being in bars as a kid. Drunk people were very entertaining and always willing to buy a kid a root beer. They were wonderlands.

Still, I lament that American bars are nothing close to how I perceive the English pub, that it is a place that’s more than just for drinking. That said, I think the better beer bars, the ones highlighting craft beer or better imports, are more hospitable and inviting than the average corner bar that carries only the major big brands. If only I lived closer to them, I might find myself stumbling home much more often.