You are here: Home / Breweries / Sucked Into The Vortex

This came out a month ago but somehow it escaped my notice then. MillerCoors unveiled their latest gimmick to sell more beer to wholesalers meeting in Las Vegas. According to Brand Week, it’s called the Miller Vortex and described as “a bottle with specially designed interior grooves that ‘create a vortex as you’re pouring the beer,’ according to a rep, who explained that the brand’s goal is to ‘create buzz and excitement and give consumers another reason to choose Miller.’ The Vortex bottle, which begins hitting shelves this month, will be supported by advertising from DraftFCB.” 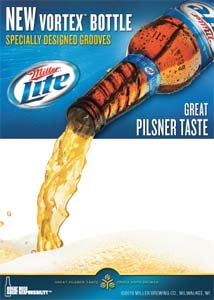 As Peter Rowe succinctly put it in the San Diego Union-Tribune:

Miller’s Vortex bottle is, at first glance, stupid. The neck swirls your beverage as it’s poured. This, if we remember our Beer Chem 101, stirs up the aromas and unleashes a larger head.

All of which can be done by, what, pouring beer from an un-Vortexed bottle and giving your pint glass a twirl?

Exactly. This is one of those things nobody needed being touted as the savior of mankind. You can see how it works in the short video below.

In related news, I also saw a television commercial yesterday for Miller Lite‘s aluminum pint bottle, which they debuted to several test markets in 2008. I guess it must have gone well.

And now yesterday, I saw a press release that Miller is bringing out “improved” packaging for their Miller High Life. Perhaps most humorously, the release is titled Common Sense Gets A New Look. The release begins with this gem. “Miller High Life, the brand synonymous with common sense, is bringing a new look to store shelves this month with the debut of new primary and secondary packaging across all bottle and can offerings.” Synonymous with common sense? What does that even mean? Marketing Daily has the story, too. Below is the new 12-pack. 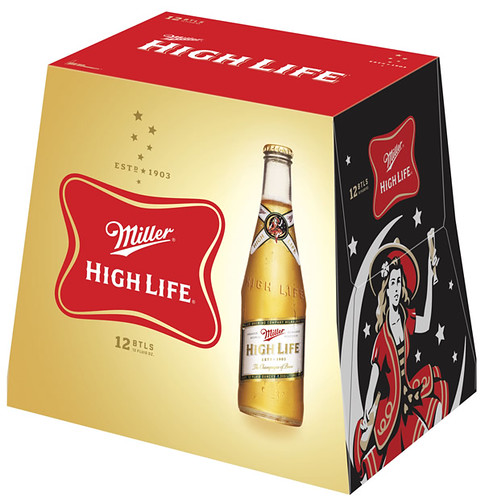 And here it is side-by-side with the old package. Wow the difference is so amazing, the beer’s just going to fly out of the store. 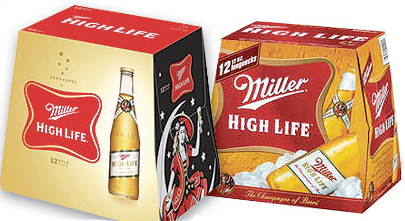 So that’s three cosmetic changes all geared to sell more beer, which is not bad in and of itself: a new gimmick bottle, an aluminum bottle and new packaging all designed to turn around slowing sales. And this is why I think the big guys will continue to slip. They never once considered it was what was inside the bottle that might be the problem. Sure, packaging needs to be updated from time to time, but gimmicks are never a good idea, at least to my way of thinking. Maybe they’ll get an initial trial sales bump from the curious, but I can’t see that it will last. The vortex is completely ridiculous, even embarrassing. The aluminum bottle doesn’t seem any better than the can, but is more expensive to produce. New packaging will, of course, become old packaging in time.

The real reason that sales are falling is that people are turning to other products, notably craft beer. But Miller still sells an awful lot of low-calorie light beer — I don’t understand for the life of my why anyone buys light beer — and so there’s really no impetus to change it or abandon it. As a result, they’ll keep throwing whatever they can think of against the wall to see what might stick and thus drive sales. And apparently, anything they can think of is a very broad range indeed. Given what they’ve tried in the past and what they’re currently trying, I’d love to know what some of the ideas that didn’t get out of the meetings might be. That should be a pretty funny list.