You are here: Home / Breweries / The Beer Monopoly

This just drives me crazy for some unknown reason. It happens with alarming frequency that seems to belie a willful ignorance and an amazing ability to act as if the media just woke from a Rip Van Winkle-like nap. The latest culprit is American Public Media, a company that produces public radio programming, including Marketplace, a show that specializes in the world of business. Marketplace is the one that just filed a report on the proposed merger between ABI and Grupo Modelo, the latest in a seemingly unending series of consolidation in the beer commodities market. Entitled Proposed Beer Merger Could Hurt Competition in U.S., here’s part of what the very short report has to say.

Barry Lynn, a fellow at the New America Foundation, argues that over the years, Anheuser Busch-InBev and the world’s second largest beer company, MillerCoors, have created a monopoly.

Really, he “argues?” And it seems like he’s implying that it’s just happened lately, slowly over the years and nobody noticed until now? Maybe I”m reading into that, but that’s how it strikes me. First of all, the “Big Two” — f.k.a. the “Big Three” — have had a monopoly over the beer world for decades, at least since the 1980s, some thirty years. And prior to that, big breweries dominated the beer industry because, well … because that’s all there was: big breweries and regional breweries. I don’t think anyone needs to “argue” that point. I’d say it’s pretty well-settled. I’m not aware of any contrary flat-Earth-like group arguing that there’s no monopoly in the beer industry. But every time there’s a high profile merger, you hear this as if nobody was paying attention until now.

It’s doubly odd because Lynn is apparently an “expert” on monopolies, author of the book Cornered: The New Monopoly Capitalism and the Economics of Destruction, and he also wrote Big Beer, A Moral Market, and Innovation in the Harvard Business Review.

In the latter piece, he expands this theme and claims that “this began to change in the early 1980s, as radical revisions to antitrust law unleashed extreme consolidation in two of the industry’s three tiers. … In brewing, a long series of mergers has reduced the field from more than 48 major brewers in 1981 to two.” But that’s not exactly correct. There weren’t “48 major brewers in 1981.” According to the Beer Institute, who’s kept the number of breweries tally since 1887, there were 38 “traditional breweries” in 1981, along with 10 “specialty brewers.” It’s not the numbers I’m quibbling with, but the characterization that these 48 breweries were somehow equal, or nearly so, by calling them all “major brewers.” I don’t know exactly who the ten were, but it’s a safe bet they included Anchor, New Albion, Sierra Nevada, Boulder, RedHook, none of whom even today, much less in 1981, would be considered “major,” especially when compared to the largest brewers. There was, and is, an enormous difference in the size of these breweries. While there were, of course, a few larger regional breweries still around in 1981, the chasm between the largest and smallest was still dramatic. It sets up a false perception to say that they were all major in 1981 but now only two remain thirty years later. That’s just not what happened. 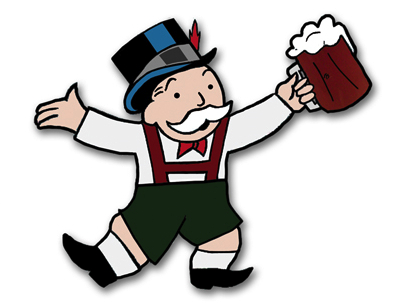 While I don’t recall this term being used, in the 1970s and the very early 80s, there was essentially the “Big 5,” which was the Big 3 plus Pabst and Schlitz. Five companies dominating the industry is hardly much different than three, and still a big difference from the fictional 48. Consolidation of breweries actually began right after Prohibition ended, when many that existed before 1919 never reopened and those that did often struggled mightily. A lot of them were swallowed up quickly by those breweries that enjoyed early post-prohibition success, a pattern that continued from roughly 1934 through the 1980s.

A 1994 study estimated U.S. beer market share by decade of the top 10 beer companies. In 1939, the biggest 10 owned 24% of the market. By 1964, it had more than doubled to 58%. In 1966, worried about what further consolidation would do to the market, the U.S. government intervened to try to keep more consolidation by M&A from happening. They obviously failed. Commenting in 1991, A. M. McGahan, remarked in his piece, “The Emergence of the National Brewing Oligopoly,” that “policy implementation was too late to prevent an oligopoly in the market. The nationwide recognition and brand loyalty earned by the ‘big five’ breweries created momentum, and these firms demonstrated that consolidation was no longer necessary to gain market share. By 1980, the combined production of the ‘big five’ breweries accounted for 75 percent of all domestic beer produced. The top ten largest breweries produced 93 percent of the nation’s beer.”

That 1994 survey largely agrees, estimating that in 1974, the top 10 accounted for 81% of the market and by 1980, their share had risen to 94%, hitting a peak of 98% in 1990. So much for this being a recent phenomenon. The domination of the beer industry by just a few companies is, quite frankly, old hat. Yet this old saw about it having just happened is trotted out every time a new merger occurs. I admit it’s gotten worse, from a sheer numbers point of view now that we’re down to two, but the fact is a near monopoly of the beer market has been with us longer than most of us have been alive.

Later this year, ABI will again go before federal regulators to ask that their purchase of Grupo Modelo be approved. ABI has owned a 50% non-controlling stake in the Mexican beer company for many years, so this would give them control, and the other half of the company. I assume it will sail through. The last time ABI came before the feds was when InBev wanted to buy A-B, and all the government required was that they divest themselves domestically of Labatt’s. Big whoop.

The meteoric rise of — let’s just call it the specialty beer market for now — has created an industry with more breweries than we’ve had in over a century, but even after 35 years only accounts for about 6% of the total market. That percentage has changed only incrementally in all those decades. That there’s a beer monopoly should quite frankly be seen as a given. It’s been with us for a long, long time. So let’s stop pretending with every new merger that this is the one to push us over the edge of decreased competition. As any smaller brewer will tell you, the market has been difficult since the very beginning for every single brewery, especially early on.

The one thing I do agree with Lynn about is this statement about the large beer companies. “They have this remarkable ability to make it seem as if this is the most competitive of marketplaces.” That’s certainly true, as a knowing walk down the average grocery store beer set will prove. So while I’m sure the argument before government regulators will undoubtedly be that competition will not materially be effected by this merger, I agree that it’s hard to see how this latest acquisition will change much. As they say, it’s a little late to close the stable door now that the horse has bolted. But he bolted so long ago that he’s nowhere in sight anymore.

In his Harvard Business Review piece, Lynn suggests that “the threat we face is not only to the variety and quality we all enjoy.” “[C]onsolidation can also threaten the primary outcome of this market — the ability of communities and individuals to manage for themselves this ever so extraordinary commodity.” Again, the fallacy here, IMHO, is that this represents a new threat. The damage has already been done, in fact done so long ago that the wound has healed. Most specialty breweries understand the world they’re trying to do business in, they get that it’s inherently unfair and is unequally balanced, but they’ve figured out how to work within a system that’s been broken almost since it began when the three-tier system was imposed after the repeal of prohibition. [Note: before the heated commentary begins, I admit the three-tier system does work in many ways, and I’m not arguing against it per se, but it has favored larger beer companies and has made life difficult for many smaller ones over the years. There’s no doubt that’s been changing but has more to do with the hard work of countless small brewery employees than any magnanimous sea change by wholesalers.]

Retail and the distribution networks favor consolidation because having to deal with fewer companies is more efficient. That’s why all of the big companies offer a myriad of brand names to give the illusion of choice. When people want choice, it’s easier to pretend to offer just that by creating different packages with very similar stuff inside them, and let advertisers and marketers create preferences. That’s a model that’s worked well in the modern era.

So will this latest merger “hurt competition” in the U.S. beer market? No more than the last one, or the one before that one, or the one prior to the last one, or the one before then, ad infinitum. Is it getting worse? Perhaps, but we’ve had a beer market dominated by just a few big players for such a long, long time that at the very least we should stop pretending this is a new problem that needs addressing with each merger. The beer monopoly has been with us for decades. Whatever solutions there might be to the problems of a consolidating industry — not that I can think of any that have a chance in hell — we should at least be honest about the situation we find ourselves in. Just say know.

You can listen to the entire Marketplace report below.