You are here: Home / Beers / The Primo Return of Primo

This was first reported back in late November during what I’ll continue to call “The Great Ennui of Late ’07” when the Bulletin was looking pretty sparse. I’m returning to the new year reinvigorated, or at least willing myself to try, and so I’m trying to catch up on old news people have sent in, and this comes to me by way of my island connection, a regular Bulletin reader living in Hawaii. Thanks Doug. It seems the old iconic Primo Beer brand has returned as of December, so far in kegs only. Bottles will be back sometime in April. 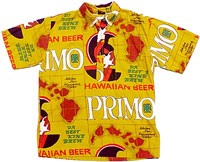 First, a little history. Primo Beer was originally made by the Honolulu Brewing & Malting Co., which was founded in 1898. After Prohibition ended, it was renamed the Hawaii Brewing Co. and by the 1950s became the best-selling beer on the islands. In 1963, Schlitz Brewing bought the brand, building a new brewery in ‘Aiea, and they continued making Primo until closing it in 1979. At its height, the Hawaiian brewery produced over 400,00 barrels per year. A few years later, in 1982, Stroh Brewing bought the brand and changed the label as well as the formula, trying to sell the brand outside Hawaii in several states. With mixed success, sales grew and then fell again, and eventually Stroh stopped making Primo in either 1997 or 98 (accounts differ on this point). A year or two later, Pabst acquired the brand, along with several others brands from Stroh’s and they are the current owners of the brand.

So last year, Pabst made the decision to bring back the label. And that makes sense, Primo was one of those iconic brands that people couldn’t help but associate with Hawaii. Using a silhouetted image of King Kamehameha, who in 1810 united the Hawaii Islands under his leadership of the Kingdom of Hawaii, was a genius marking move and the bold Hawaiian shirts made in the 1960s-70s with the Primo label continue to be collector’s items right up to the present.

The new Primo is being launched by the Primo Brewing Co., a division of Pabst Brewing. A new recipe was created by brewmaster Phil Markowski, who justly won fame and fortune for his beers at the Southampton Publick House on Long Island, New York.

The beer itself is being brewed by a craft brewery on the island of Kauai, Keoki Brewing, who initially will brew around 200 kegs each month. Once bottled production starts up, that will be handled stateside by Pabst in Irwindale, California. But since Pabst doesn’t own any breweries, that means Miller Brewing — who does own a brewery in Irwindale — will be contract brewing the beer for Pabst. According to a press release, “the draft and bottled versions will be distributed by Paradise Beverage Co.”

It will be interesting to see if they can successfully revive the brand. I imagine it will be great as a tourist beer and for locals looking to support a well-known local brand, at least as far as the draft beer is concerned. The bottles stateside may prove trickier, especially after the initial novelty wears off, as it inevitably will.