You are here: Home / Beers / Thesaurus Of Beer

Today is the birthday of Peter Roget. He was born in 1779, in London, the son of a Swiss clergyman, and became a doctor, but was obsessed with making lists since at least the age of eight. I can certainly relate. Thanks to several bad incidents in his life — both his father and his wife died young, and a favorite uncle committed suicide in front of him — he suffered depression most of his life, and worked on his thesaurus as a coping mechanism. When it was first published in 1852, the full title was Thesaurus of English Words and Phrases Classified and Arranged so as to Facilitate the Expression of Ideas and Assist in Literary Composition. After his death, both his son and then his grandson continued to work on new editions of what become known as Roget’s Thesaurus, the first reference book of its kind, although there are now dozens of similar books available.

I’m not sure if I’m so fascinated by words because I’m a writer, or if I’m a writer precisely because I love words. I have a long list of Beer In Other Languages, exhaustive lists of Drunk Words, slang terms for over-indulging and puke words, for when you really over-indulge. I’ve also looked at The Language Of Hangovers, but finding Beer Slang has proved far more difficult for some reason (although I should point out, that last one is a work in progress that I’ve only worked on a few times since first posting it in 2011).

As most beer historians will point out, beer as a generic term is fairly recent. Just ask Martyn Cornell or Ron Pattinson. And ale and lager as over-simplified subdivisions below beer is even trickier. But the fact remains, apart from wholly slang terms, there aren’t very many words which also mean beer, apart from beer. You might immediately offer “cerveza,” but that is, of course, in Spanish. So, because it’s Thesaurus Day, I checked out a few, and here’s what I found:

On Roget’s Thesaurus online, a search for “beer” yields this sparse response.

Roget’s 1922 International Thesaurus is also online, on Bartleby.com, though it’s pretty unsatisfying, too:

Thesaurus.com, part of the dictionary.com family of reference website, gives this for beer synonyms:

Curiously, only amber nectar, and booze are listed as “slang,” yet virtually all of them seem like either slang, specific types of beer or modified types of beer, like “draft beer.”

The thesaurus at Infoplease online yields this:

usage: a general name for alcoholic beverages made by fermenting a cereal (or mixture of cereals) flavored with hops

The OneLook Thesaurus gives their top 100 beer-related words, though many don’t even make sense. You can even keep going, 100 new words at a time, and not surprisingly they get even less related to beer as you go deeper, some ridiculously so.

This is the graph of beer synonyms that the Visual Thesaurus creates: 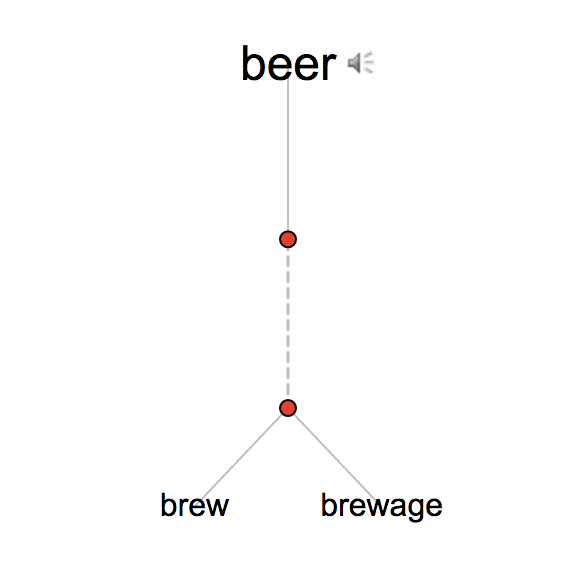 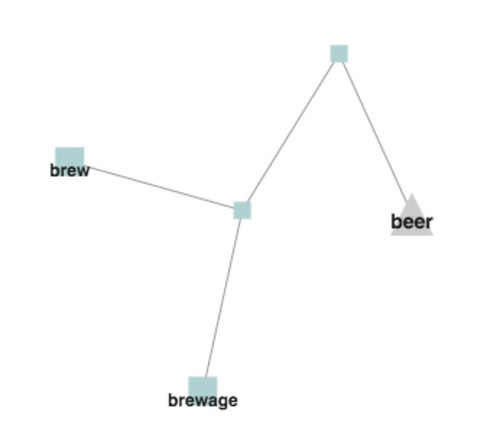 The Collins Dictionary Thesaurus gives this list of beer synonyms: 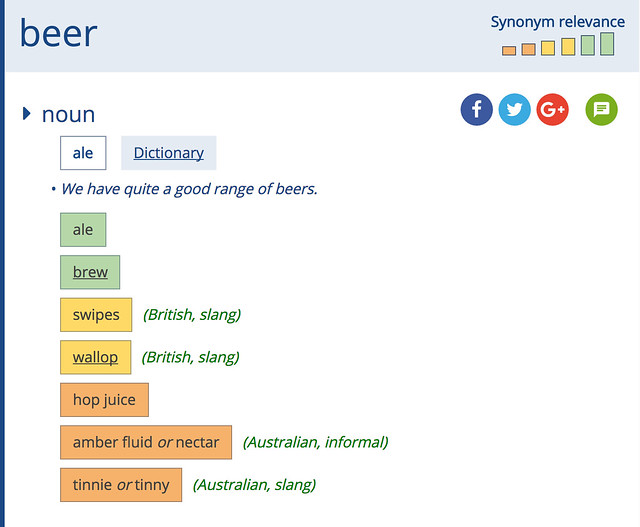 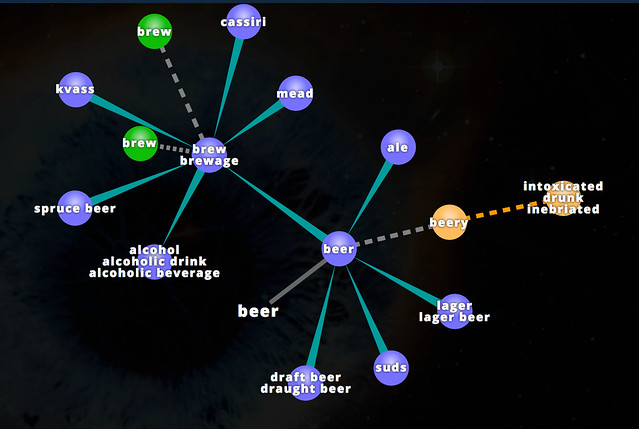 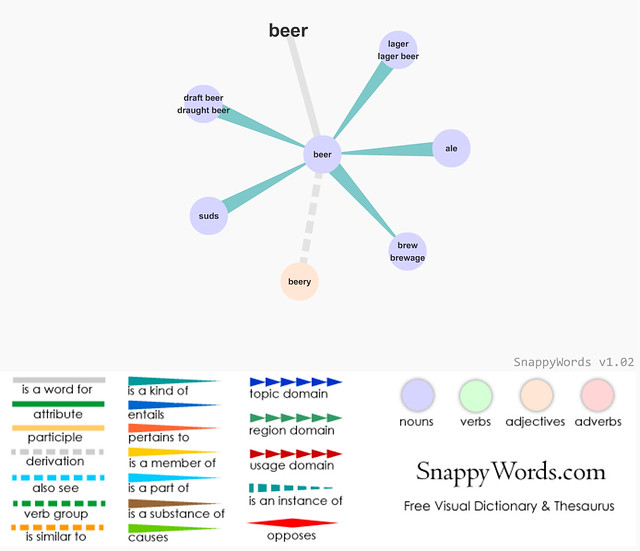 Also, Wordnik and Power Thesaurus both give extensive answers, pulling from numerous sources, but end up giving almost all of the same answers as everyone else.

The conclusion is pretty much what I expected. There just aren’t many other words that mean beer. Apart from goofy slang and colloquialisms, there’s just no good generic words for it. One strange one that kept coming up was “brewage.” I’ve never heard that come up in conversation, have you? “I’m sitting here enjoying a glass of brewage.” It just doesn’t roll off the tongue. Maybe because it’s too close to sewage. But along with “brew,” it appears to be the most common synonym to come up. How is it possible that one of the most common words for beer is one nobody actually uses? I guess I’ll just have to keep enjoying my beer without any colorful words to substitute. C’est la vie. Happy Thesaurus Day.