Last year, I posted a list of The World’s Top 10 Beer Brands . That list, from Drinks Business, was for sales as of the end of 2012. Earlier today, the Wall Street Journal tweeted a chart showing a newer list of the top ten, from Euromonitor International. Their data was accompanying a story, SABMiller Considers Best Route to a Global Beer Brand, though I couldn’t see the context, since only WSJ subscribers could see the entire article. No matter, I was keen to see if this year’s numbers were similar, as you’d expect, from last year, even though the source of the information is slightly different. 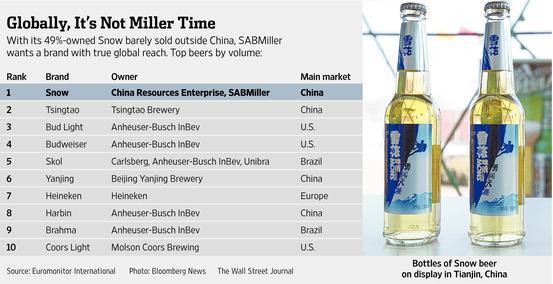 It’s pretty close to last year’s list. The top two, both Chinese brands, remain unchanged. But Bud Light has jumped up from #5 to claim the third spot, while Bud slipped down one to #4. Yanjing Beer, which was #4 on last year’s chart, slipped to #6, while Brazil’s Skol shimmied up from seventh to #5. Heineken moved up one to #7, while another Chinese brand (owned by ABI) — Harbin — is at #8, but was not on last year’s list. Finally, Brahma and Coors Light switched placed at the bottom of the list. Last year, Coors Light was #9, this year it’s Brahma. Corona was #6 on last year’s chart, but is not on the list at all this year.