Tuesday’s ad is for Schlitz, from 1951. The ad shows a circus elephant so enamored of a Schlitz billboard that he’s trying to drink the beer off of the ad. A policeman is running up to the elephant, but his trainer is just shrugging his shoulders. With beer this good, what can he do? At least that’s the idea. I’m not sure I’d take advice on what makes a good beer from an elephant. 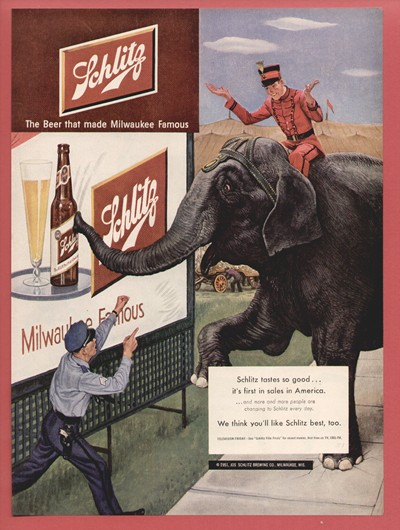 Inspired by home brewers from across the country, last year President Obama bought a home brewing kit for the kitchen. After the few first drafts we landed on some great recipes that came from a local brew shop. We received some tips from a couple of home brewers who work in the White House who helped us amend it and make it our own. To be honest, we were surprised that the beer turned out so well since none of us had brewed beer before.

As far as we know the White House Honey Brown Ale is the first alcohol brewed or distilled on the White House grounds. George Washington brewed beer and distilled whiskey at Mount Vernon and Thomas Jefferson made wine but there’s no evidence that any beer has been brewed in the White House. (Although we do know there was some drinking during prohibition…)

Since our first batch of White House Honey Brown Ale we’ve added the Honey Porter and have gone even further to add a Honey Blonde this past summer. Like many home brewers who add secret ingredients to make their beer unique, all of our brews have honey that we tapped from the first ever bee-hive on the South Lawn. The honey gives the beer a rich aroma and a nice finish but it doesn’t sweeten it.

And here’s the recipe for the Honey Ale:

The White House also created a short video about the homebrew project.

And here’s the recipe for the Honey Porter:

Wondering how the recipe might work out? Garrett Oliver, brewmaster at Brooklyn Brewing expressed his opinion in the New York Times, in White House Beer: A Brewer Weighs In.