Between 1951 and 1953, P. Ballantine and Sons Brewing Company, or simply Ballentine Beer, created a series of ads with at least thirteen different writers. They asked each one “How would you put a glass of Ballantine Ale into words?” Each author wrote a page that included reference to their beer, and in most cases not subtly. One of them was Ellery Queen, who’s best known for writing a series of mystery stories.

Ellery Queen is not actually one person, but two: Frederic Dannay and Manfred Bennington Lee. They “were American cousins from Brooklyn, New York who wrote, edited, and anthologized detective fiction under the pseudonym of Ellery Queen. The writers’ main fictional character, whom they also named Ellery Queen, is a mystery writer and amateur detective who helps his father, Richard Queen, a New York City police inspector, solve baffling murders.” Today is the birthday of Frederic Dannay (October 20, 1905–September 3, 1982), and his co-writer, Manfred Bennington Lee, was born the same year (January 11, 1905–April 3, 1971). 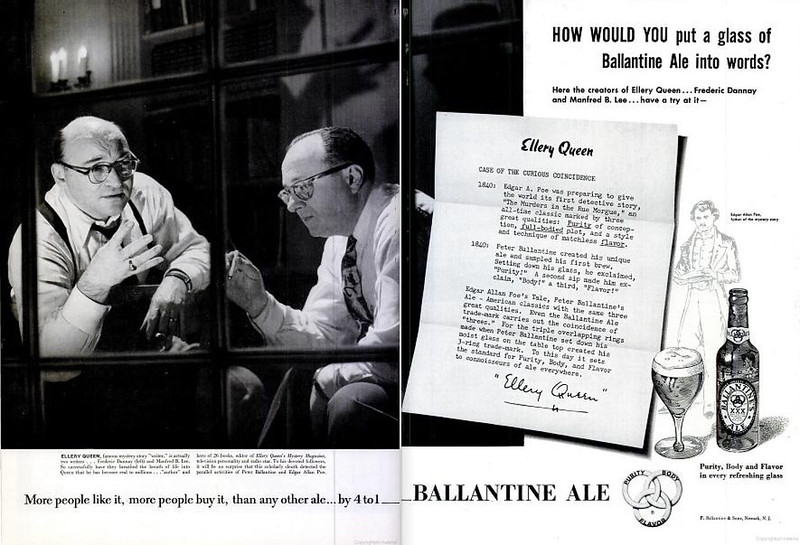 Their piece for Ballantine was done as if it was one of their cases, but it was less a mystery and more a simple contrast of two unrelated events that both took place the same year. It seems a bit forced, actually, and comes across like pure propaganda, even more so than the other ads in this series.

CASE OF THE CURIOUS COINCIDENCE

1840: Edgar A. Poe was preparing to give the world its first detective story, “The Murders in the Rue Morgue,” an all-time classic marked by three great qualities: Purity of conception, full-bodied plot, and a style and technique of matchless flavor.

1840: Peter Ballantine created his unique ale and sampled his first brew. Setting down his glass, he exclaimed, “Purity!” A second sip made him exclaim, “Body!” a third, “Flavor!”

Edgar Allen Poe’s Tale, Peter Ballantine’s Ale — American classics with the same three great qualities. Even the Ballantine Ale trade-mark carries out the coincidence of “threes.” For the triple overlapping rings made when Peter Ballantine set down his moist glass on the table top created his 3-ring trade-mark. To this day it sets the standard for Purity, Body and Flavor to connoisseurs of ale everywhere. 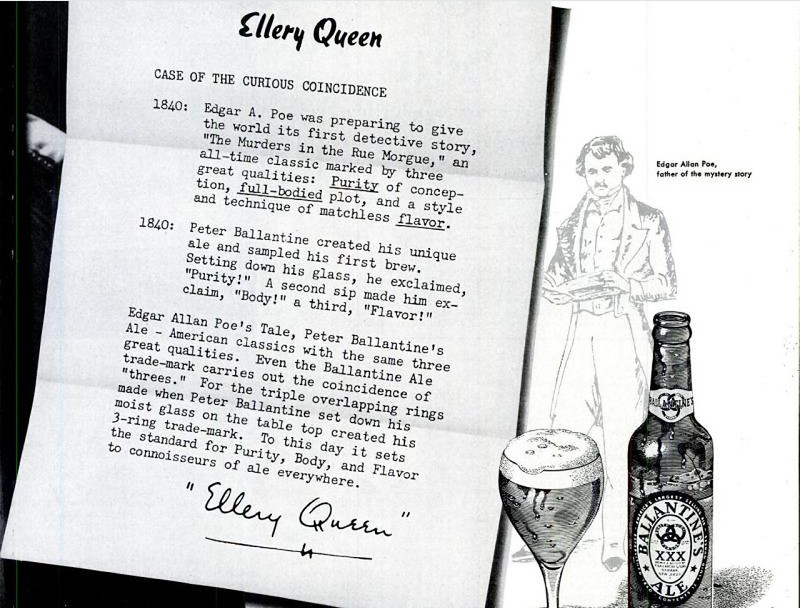