Sunday’s ad is for Rheingold, from 1953. In the 1940s and 1950s, Rheingold recruited a number of prominent celebrities to do ads for them, all using the tagline: “My beer is Rheingold — the Dry beer!” This ad features Canadian-born British actress, singer and comedic performer Beatrice Lillie. “She made her West End debut in 1914 and soon gained notice in revues and light comedies, becoming known for her parodies of old-fashioned, flowery performing styles and absurd songs and sketches. She debuted in New York in 1924 and two years later starred in her first film, continuing to perform in both the US and UK. She was associated with revues staged by André Charlot and works of Noël Coward and Cole Porter, and was frequently paired with Gertrude Lawrence, Bert Lahr and Jack Haley. During World War II, Lillie was an inveterate entertainer of the troops. She won a Tony Award in 1953 for her revue An Evening With Beatrice Lillie.” In this ad, Lillie talks about her award-winning show, “An Evening With Beatrice Lillie,” where she promises to “sing your favorites songs, tell my favorite jokes, [and] serve our favorite beer,” which you won’t be surprised to learn is Rheingold Extra Dry. 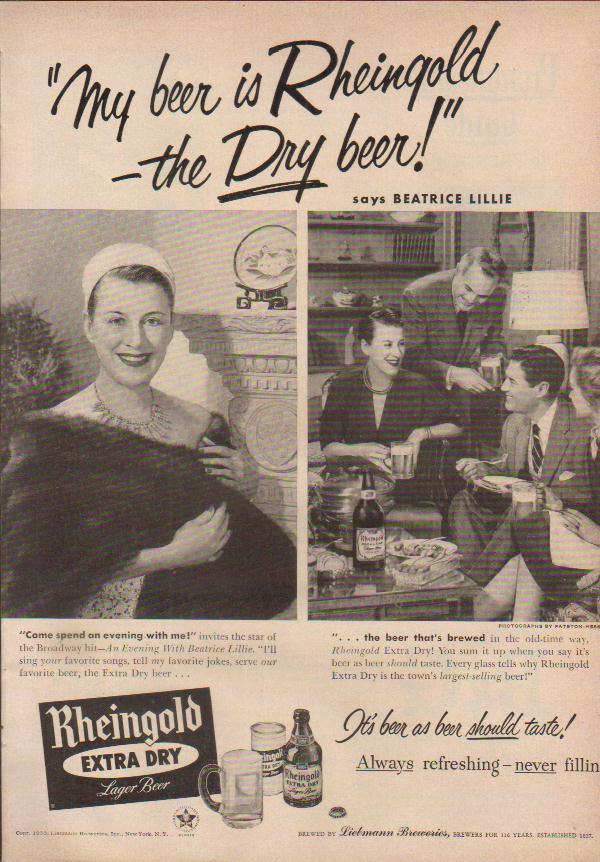